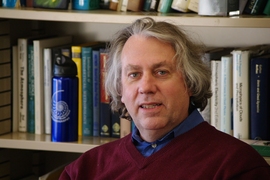 This May, in a speech at an oil and natural gas conference in North Dakota, Republican presidential nominee Donald Trump pledged, if elected, to cancel the Paris Agreement on climate change that was adopted by the United Nations Framework Convention on Climate Change (UNFCCC) at last December’s United Nations Climate Change Conference (COP 21). The UNFCCC describes the agreement as an historic effort to “to combat climate change and to accelerate and intensify the actions and investments needed for a sustainable low carbon future.” The United States, which formally entered the Paris Agreement earlier this month, is one of 29 parties that ratified the agreement.

Such statements about a potential “Parexit” and other suggestions during this presidential campaign season that the U.S. should no longer serve as a leader in the fight against climate change have deeply concerned 375 members of the National Academy of Sciences, including Kerry Emanuel, the Cecil and Ida Green Professor of Earth and Planetary Sciences at MIT. Today, the group, which includes 16 others from MIT, released an open letter to draw attention to the serious risks of climate change and the consequences of withdrawing from the Paris Agreement.

Emanuel spoke with MIT News about the impetus for the letter and the impact the presidential election could have on the United States’ role in fighting climate change.

Q: How would you sum up the stance you and your coauthors are taking in this letter, and why now?

A: The Republican Platform would attempt to withdraw the U.S. from the Paris Agreement and retreat from clean energy development in favor of coal, whose combustion is a leading contributor to global warming. These actions would greatly exacerbate the threats associated with climate change. I join 374 other members of the National Academy of Sciences in condemning these proposed actions.

In the letter, we write, “During the Presidential primary campaign, claims were made that the Earth is not warming, or that warming is due to purely natural causes outside of human control. Such claims are inconsistent with reality.

“Others argued that no action is warranted until we have absolute certainty about human impacts on climate. Absolute certainty is unattainable. We are certain beyond a reasonable doubt, however, that the problem of human-caused climate change is real, serious, and immediate, and that this problem poses significant risks: to our ability to thrive and build a better future, to national security, to human health and food production, and to the interconnected web of living systems.”

Q: Beyond the Paris Accord, are there any other efforts to fight climate change currently underway that you think could be significantly impacted depending on the outcome of the presidential election?

A: The U.S. is and has been a leading innovator in technology, including clean energy. Government policy is critical for incubating clean energy technologies in the face of large subsidies currently in place for fossil fuels, and U.S. leadership on the climate issue is absolutely essential for dealing with the global problem of climate change.

Q:  How did the idea for an open letter come about, and why is climate change an issue that scientists keep coming together on?

A: The idea for the letter came from Ray Weymann, a climate scientist emeritus at the Carnegie Institution for Science, one of the four organizing co-authors. The many scientists who work on climate were very dismayed by the tone and content of the Republican Platform's position on climate change. We feel that were the sentiments of the platform acted on, the U.S. would forfeit its leadership position in the global effort to deal with climate change, climate risks would accelerate, and the U.S. would lose an important economic opportunity to lead the world market in innovative clean energy. We decided that we needed to say something about this and elected to publish an open letter.

A letter co-authored by Prof. Kerry Emanuel warns against withdrawing from the Paris climate agreement, writes Chelsea Harvey for The Washington Post. “The U.S. withdrawal from the Paris Agreement would really set back all of our efforts to deal with climate problems,” says Emanuel.

Mercury News reporter Lisa Krieger writes that a letter co-authored by Prof. Kerry Emanuel warns U.S. politicians about the dangers of withdrawing from the Paris climate agreement. “We all reacted with some shock to statements from the Republican platform that would have reversed decades of progress,” said Emanuel. “We felt we had to say something.”

Getting the world to turn down the heat

Will the Paris climate summit lead to a cooler planet?