Will the Paris climate summit lead to a cooler planet?

Big hopes are riding on the 2015 United Nations climate change conference planned for Nov. 30-Dec. 11 in Paris, where more than 190 nations will strive to hammer out an international agreement aimed at lowering global temperatures through significant reductions in human-made greenhouse gas (GHG) emissions. But the meeting, known as COP21, or the 21st Session of the Conference of the Parties to the UN Framework Convention on Climate Change (UNFCCC), is also attracting a fair amount of skepticism.

For good reason: More than two decades of UN climate summit meetings have yielded limited results. The Kyoto Protocol of 1997 established GHG emissions reduction commitments for a small number of industrialized countries from 2008 to 2012, but was not ratified by the U.S. because it made no demands on developing countries. Overcoming this hurdle, the Copenhagen meeting in 2009 produced voluntary pledges from both developed and developing countries through the year 2020 that promised little headway in keeping global temperatures below the 2 degree Celsius threshold identified by the UNFCCC as necessary to avoid the most serious impacts of climate change.

Now, as some 40,000 attendees and 80 heads of state prepare to converge on Paris, the stakes are high, said Michael Mehling, executive director of the MIT Center for Energy and Environmental Policy Research (CEEPR) as he introduced a panel discussion, “The Paris Climate Summit: Prospects for a Global Agreement,” on Nov. 5 at MIT’s Tang Center.

“This time around, we really know that we’ve pretty much run out of time, meaning we do not have the luxury of endless further negotiating rounds,” Mehling warned. “So in many ways, the climate summit in Paris is a make-it-or-break-it test for UN-led international climate diplomacy.” 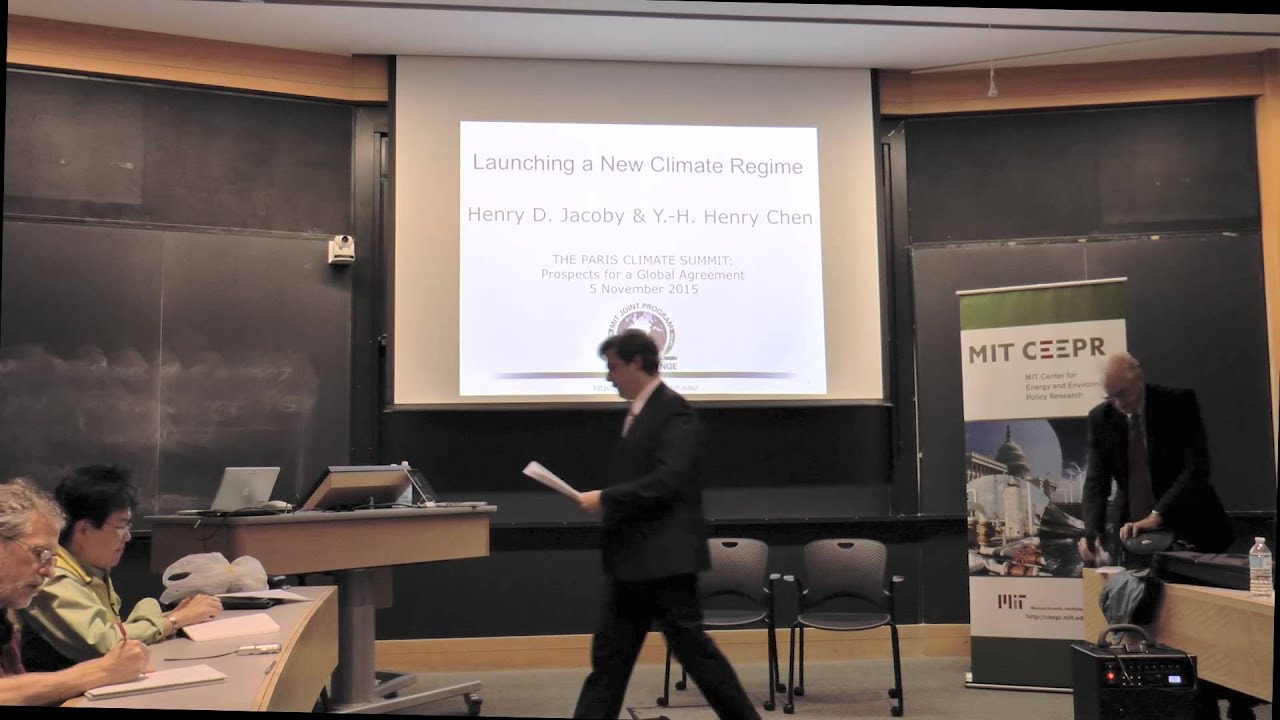 A jar half empty, half full

In their remarks on the upcoming Paris talks, the panelists — Henry D. Jacoby, the William F. Pounds Professor of Management, Emeritus at the MIT Sloan School of Management, former director of CEEPR, and former co-director of the MIT Joint Program on the Science and Policy of Global Change; Michael Grubb, professor of international energy and climate change policy at University College London; and Valerie Karplus, assistant professor of global economics and management at the MIT Sloan School of Management and director of the Tsinghua-MIT China Energy and Climate Project (CECP) — expressed guarded optimism.

Jacoby called on Paris negotiators to launch “a new climate regime” that he believes could lead to meaningful, long-term cuts in GHG emissions. Noting that expected emissions reduction pledges at the Paris conference will not be sufficient to prevent global temperatures from exceeding the 2 C threshold, Jacoby recommended the establishment of an ongoing, credible, timely process to review pledges; periodic cycles of new, increasingly stringent pledge updates; and sustained, large-scale financial support to enable developing countries to meet their commitments to lower GHG emissions.

“By 2030 there’s about a 14 percent reduction below [emissions levels that would be achieved by extending Copenhagen climate commitments], but clearly it’s not enough,” said Jacoby, basing his estimate on the MIT Economic Projection and Policy Analysis model developed by the MIT Joint Program. “If we can’t stop the growth of GHG emissions in the 2035-2040 period and start global emissions going down in this period, then it’s not just that 2 degrees is in the rearview mirror; the rest of the situation is much more uncertain and very dark.”

Grubb painted prospects for an impactful international agreement as a jar that’s at once half empty, with expected emissions reduction pledges likely to produce global temperatures in the neighborhood of 3 C, and half full, due to current geopolitical conditions that favor robust international cooperation.

Grubb noted several positive trends, including China’s pledges to achieve a GHG emissions peak by 2030 and to establish a national emissions trading scheme by 2017; the hard push for a deal by the U.S. administration; and the increased market penetration of new, low-carbon technologies. While maintaining “90 percent confidence” that Paris will reach a deal, he emphasized that its successful implementation will depend on the ongoing engagement of citizens across the globe.

“So, is the jar half empty or is it half full?” said Grubb. “At the end of the day, there’s a new generation emerging that will ultimately provide the answer to that question.”

Whether that answer turns out to be “yes” or “no” will certainly depend on the actions of China, the world’s largest consumer of energy (largely from coal) and emitter of carbon dioxide.

Karplus outlined several steps China is taking in Paris to move the needle in the right direction, from increasing the non-fossil fuel share of its energy use to around 20 percent by 2030, to reaching peak CO2 emissions by that same year.

She also observed that China’s Paris pledge will deliver significant co-benefits in the form of reduced air pollution and associated health effects. She noted, however, that additional measures will be needed to deliver air pollution reductions targeted in the near term. Coupling the CECP’s China Regional Energy Model with an air chemistry model to show the impacts of different climate policies on projected CO2 emissions, local air pollution, health outcomes, and the Chinese economy, she determined that despite fulfilling its 2030 peaking pledge, without additional measures, China’s air pollution levels would still remain slightly above where they were in 2010.

Karplus cited China as a prime example of the challenges that rapidly emerging countries face as they try to balance the global call to reduce emissions with the national imperative to grow their economies and improve the livelihoods of their populations.

“China’s engaged in a delicate balancing act,” she said. “It has obligated its leaders to actually deliver on a promise to provide economic growth as well as low-carbon development consistent with [its COP21] pledge. Delivering on this pledge will require continued institutional innovation.”