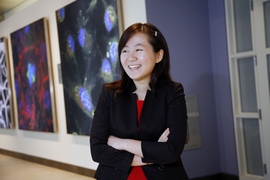 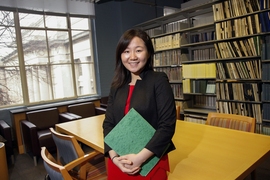 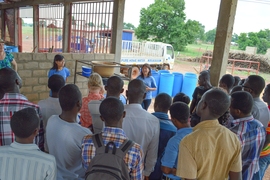 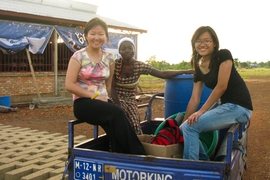 ↓ Download Image
Caption: Xing and Oh shop for local materials with one of their local partners, Zainab.
Credits: Courtesy of Yiping Xing

Caption:
Xing and Oh shop for local materials with one of their local partners, Zainab.
Credits:
Courtesy of Yiping Xing

Since day one at MIT, senior Yiping Xing has been interested in exploring medicine from different perspectives. Already, the biology major has co-authored two scientific papers, including a Nature Nanotechnology paper on siRNA delivery research; co-led a project in Ghana to convert organic waste into animal feed; and participated in national health policy through an internship in the U.S. Surgeon General’s office.

Xing was born near Beijing, in one of China’s most polluted industrial cities, but moved to Cleveland at age 6 when her father, a physician-scientist, accepted a job at the Cleveland Clinic. The move offered her an early opportunity to question how environmental differences impact global health disparities.

“It snows a lot in Cleveland, and my first big impression of the U.S. was how clean and white the snow was,” Xing says.

Since then, she has become a strong believer in the notion that “health extends beyond hospital walls, and is very much related to your environment.”

Working with graduate student James Dahlman in the lab of David H. Koch Institute Professor Robert Langer at the Koch Institute for Integrative Cancer Research, Xing is part of a team studying a drug-delivery system that combats diseases, including lung cancer, from a genetic angle.

The system can use small interfering RNA (siRNA) to turn off genes known to play a role in the development of cancer. The liver is a natural destination for many nanoparticles, but a major challenge has been engineering delivery systems targeted to other cells or organs. Last May, Xing co-authored the Nature Nanotechnology paper describing a successful delivery system targeted to pulmonary endothelial cells, which are implicated in lung cancer — marking the most potent siRNA delivery and RNAi gene silencing to date outside the liver.

“Seeing China’s environmental degradation, and its public health consequences, have been major influences in my perception of what’s important in my research, and lung cancer is a disease that has affected my family very personally,” Xing says. “I’m a very impact-based person, and if I can see the larger picture of my research, that’s what motivates me.”

After the initial move to Cleveland, Xing’s family relocated to Oklahoma, then New York, and then Columbus, Ohio. Although moving was always difficult, she says the experience ultimately made her more adaptable, flexible, and open-minded — traits she deployed as part of a service project in Ghana.

Xing’s project, Hope in Flight, is based in MIT’s International Development House (iHouse) and aims to tackle the public health challenge of organic waste accumulation while also creating opportunities for local entrepreneurship. She and her teammates initially designed a waste bioconversion system made entirely of wood — which they chose so that farmers could build it with cheap, natural, and local products — but it didn’t catch on with Ghanaians, and she had to roll with the punches.

“When we went there, people in the community said, ‘Are you nuts? You can’t build a system out of wood here, the termites will eat it within a year!’” she says. “We were so shocked, and had to redesign our whole system while we were there.”

Winning funding from the MIT Public Service Center’s IDEAS Global Challenge in 2013 — and this time relying on feedback from locals — the team redesigned their converter using plastics and metals that could be bought cheaply from local markets. They also raised the system off the ground so it would be out of reach from free-roaming goats — one of the Ghanaians’ biggest concerns.

The process itself relies entirely on natural resources: black soldier flies and the sweltering Ghanaian sun. Fly larvae are added in specific ratios to a converter containing agricultural, kitchen, human, and animal waste. As the larvae mature, they feed off the waste, converting it into their own high-protein body mass. At the pre-pupae stage, they can then be dried under the sun and sold as animal feed.

This feed is nutritionally comparable to fishmeal, the current global standard, which is becoming less accessible to rural farmers, as it rapidly rises in cost. And since black soldier flies lack mouths, they can’t spread disease, a major concern with many other insects. In fact, their presence actually deters most disease-carrying insects from buzzing around the waste converters.

“I believe a lot of solutions can be found in nature,” Xing says.

Although there are still some kinks to work out, Xing and her teammates have been working with universities and commercial farmers in the area to implement the project with a greater degree of local autonomy.

“I want these communities to really take ownership of this technology,” she says. “If we could leave for five years and then come back to see that the local community is still using it, I would call that a success.”

After participating in both research and international development, however, Xing realized that many of the issues she wants to tackle could best be approached through government policy. Through the MIT Washington, DC Summer Internship Program, she landed a spot last summer working in the office of Boris Lushniak, then the nation’s acting Surgeon General.

Xing attended most of Lushniak’s local speaking engagements and meetings, and experienced research based more on reading and writing than on lab work. Throughout the summer, she was also exposed to the positive ways that effective policy can address social determinants of health. Now, as she positions herself to start medical school in the fall, she envisions her path leading her initially to clinical work and research, but then ultimately back to government policy.

“I think there is an underrepresentation of scientists and physicians in government,” she says. “But the only way to change that is by being one of the scientists who’s willing to put themselves out there, and to work towards bridging the gap that often exists between science and policy.”

In a testimonial for U.S. News & World Report, MIT graduate Yiping Xing shares why MIT was the right school for her. “MIT doesn't simply teach you science or knowledge; it trains you to be a scientist and problem-solver, giving you many opportunities to apply what you learn,” says Xing.