Biotech to the rescue 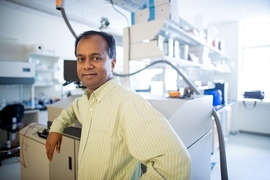 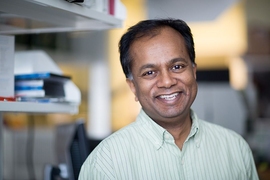 “It’s about the impact we can have on patient care,” says Sasisekharan, the Alfred H. Caspary Professor of Biological Engineering and Health Sciences and Technology. “Whether it’s monitoring for disease, or diagnosing, or treating — that’s the common element.”

Each company was born from Sasisekharan’s MIT lab, and each is now developing technologies to make stronger therapeutics, battle cancer and infectious diseases, and improve overall global health.

The most established of the three, founded in 2001, is Momenta Pharmaceuticals, which uses technology invented by Sasisekharan to sequence and engineer complex molecules — including proteins, polypeptides, and polysaccharides — to create powerful drugs from these molecules. In his 12 years on Momenta’s board, Sasisekharan helped the now multimillion-dollar company market its first commercial drug — a low-cost, highly potent version of the blood-thinner Lovenox that’s being used today by hundreds of thousands of patients worldwide.

Sasisekharan, who is also a member of MIT’s Koch Institute for Integrative Cancer Research, has since left Momenta to focus on his younger startups — Cerulean, founded in 2006, and Visterra, founded in 2008 — both of which are developing drugs that are now in advanced clinical trials. Cerulean uses “nanopharmaceuticals” that act like Trojan horses, invading tumors and then slowly releasing highly potent chemotherapeutics. Visterra is developing a vaccine that intervenes early in influenza A’s infection cycle, inhibiting the virus’ fusion to host cells — and possibly laying the groundwork for a universal vaccine for influenza.

Thriving today in Cambridge — “all within a 10-minute walk from MIT” — these companies owe their success, Sasisekharan says, to his leveraging of the novel scientific ideas, entrepreneurial ecosystem, and disparate scientific fields found at MIT. “The convergence of biology, analytics, computation, and engineering is a critical ingredient to solving the problems that are part of the Momenta, Cerulean, and Visterra stories,” he says.

Momenta’s story dates to 1999, when Sasisekharan and an MIT team “pieced together a toolkit” to sequence complex sugars (or polysaccharides), much as scientists had already done with DNA and proteins.

It was a massive undertaking: Compared with DNA, which has four building blocks, and proteins, which have 20, polysaccharides have 32 building blocks — and, potentially, a million sequences per sample. “Everyone told me to avoid them,” Sasisekharan says.

But the tool’s true value was in its speed, Sasisekharan says.  “Previously, it would almost take an entire PhD thesis to solve the structure of a very small carbohydrate,” Sasisekharan says. “This was something that very rapidly allowed us to solve important sequencing puzzles of large chains in a matter of days.”

Among other things, this method — described in papers published in Science (1999) and the Proceedings of the National Academy of Sciences (2000) — could lead to better understanding of the role polysaccharides play in viral infections and tissue development.

One thing that became very clear, Sasisekharan says, was the tool’s broad use in understanding complex molecules that make up commercial drugs — especially a molecule called heparin. Heparin-based drugs are created by chopping the molecule randomly, creating pieces with varying sizes and active sites and disparate strengths from batch to batch. Momenta’s technology could identify and remove heparin’s active ingredient, separating it from the junk to build a more efficient drug.

In 2001, Sasisekharan co-founded Momenta (then Mimeon) to apply the technology to the U.S. regulatory pathway for drug approval, “where it was generally considered impossible to make these complex molecules,” Sasisekharan says.

“Once you know you can correct these things, we knew we could use this technology in a way to make more of these complex medicines more accessible to the world,” he says.

Using the technology, Momenta has since grown a pipeline of therapeutics, including its widely used generic Lovenox product, numerous novel drug candidates, various biogenics, and a generic version of Copaxone, a drug for multiple sclerosis, that is now ready for potential launch. Apart from the therapeutic benefits, Momenta’s lower-cost drugs have the potential to save millions of dollars, according to the company.

But while seeing MIT research find practical application and earn millions in industry is rewarding, Sasisekharan says, the technology may have best demonstrated its real-world value two years before Momenta’s products even hit the market — during a heparin contamination crisis of 2008.

That year, contaminated batches of heparin slipped past the U.S. Food and Drug Administration. Supplies were put under quarantine, leading to a massive shortage. Needing to rapidly identify the contaminant, the FDA called on Sasisekharan.

Using Momenta’s core technology, Sasisekharan and a team of MIT and international researchers, within weeks, identified the contaminant as oversulfated chondroitin sulfate, a sugar chain very similar to heparin (rendering it undetectable) that caused allergic reactions in patients. Batches were tested and recalled, and the crisis ended. Sasisekharan published these findings with the FDA in Nature Biotechnology and the New England Journal of Medicine.

“This was one key piece of the Momenta story, where the technology became extremely valuable and useful in the real world,” says Sasisekharan, now Momenta’s scientific advisor. “It was a very humbling application of the technology that saved lives.”

Back in 2005 — before the heparin crisis, but years after the launch of Momenta — Sasisekharan found himself with a new batch of grad students, itching to start another venture. (Many of his students had joined Momenta — a recurring theme among all of Sasisekharan’s startups.)

At the time, nanotechnology was on the rise, especially at MIT. “There was a big interest in ‘going nano’ in regard to drug delivery,” Sasisekharan says. And there was the application of this concept in anti-angiogenesis, which involves cutting tumors’ blood supply to starve them to death — “what is called a ‘Napoleon strategy’ of cutting the supply off from the enemy,” Sasisekharan explains.

Combine the rise of anti-angiogenesis with Sasisekharan’s wife’s career as an oncologist — “who inspired me to focus on cancer treatment,” he says — and you have the ingredients for the scientific core of Cerulean.

Building on groundwork laid by Institute Professor Robert Langer, Sasisekharan led a team from MIT in engineering nanoparticles that could carry anti-angiogenic drugs on their outer membranes and highly potent chemotherapeutic agents inside.

When sucked into a tumor’s pores, the nanoparticles’ outer membrane disintegrates, rapidly deploying the anti-angiogenic drug — causing blood vessels feeding the tumor to collapse, and trapping the loaded nanoparticle. Inside the tumor, the nanoparticles slowly release a chemotherapeutic agent, such as camptothecin and docetaxel, while leaving healthy cells unscathed. This avoids a major challenge of chemotherapy: its toxicity to the healthy cells surrounding cancerous ones. This platform was described in a paper published in 2005 in Nature.

The following year, in 2006, Sasisekharan co-founded Cerulean to commercialize the technology; today, it remains one of the few companies using nanotechnology to treat cancer. But because nanotechnology is still relatively new, Cerulean is working on ways to improve the platform. “The field is moving fast, and some of the things we’re still learning,” Sasisekharan says.

Still, the company has raised $85 million and partnered with cancer centers and hospitals around the nation to further refine its technology; its first drug candidate, CRLX101, has entered clinical trials. “With the clinical trials, we’re past some of the safety issues that were of concern for nanoparticles, and are beginning to see efficacy,” Sasisekharan says. “In a few years we may see an approval of ‘nanodrugs’ for oncology applications.” Cerulean was one of a few Boston-area biotech companies to go public recently.

While growing Momenta and Cerulean, Sasisekharan slowly assembled the pieces for his most recent venture, Visterra, which focuses on a separate global health issue: influenza and other infectious diseases.

In 2003, during a trip with his wife to Thailand (where Sasisekharan spends most summers teaching), he found himself in the middle of the country’s H5N1 epidemic. “I remember we couldn’t even order eggs in our hotel — that’s how severe it was,” he says: The flu ravaged the poultry industry in Thailand.

Nudged by the princess of Thailand to address a global health issue, Sasisekharan worked with an MIT team to determine how and when bird flu may make the jump from birds to humans.

Sasisekharan and his MIT team ultimately found, five years later, that H5N1’s hemagglutinin, a protein on the virus surface, must bind to our umbrella-shaped receptors in order to infect humans. Published in 2008 in Nature Biotechnology, this discovery could help scientists monitor the virus’ evolution and develop vaccines against a deadly flu pandemic. Sasisekharan and his team applied this approach more recently to the emerging N7N9 influenza virus, with results published in 2013 in Cell.

Visterra grew from the novel technology Sasisekharan and his team invented for this research — which combined computation and bioengineering.

Using algorithms, the technology builds a 3-D model of key viral proteins and identifies optimal hierotopes — sites where antibodies bind — on the viral hemagglutinin. These sites are found across all 15 influenza A subtypes, but don’t mutate — meaning they can’t develop resistance to vaccines. Visterra scientists build and tweak antibodies, using bioengineering tools, to specifically target these hierotopes.

Visterra’s first commercial antibody, called VIS410, is now in its first phase of clinical trials; it has the potential to vaccinate against all influenza A subtypes.

In 2012, the Bill and Melinda Gates Foundation partnered with Visterra — which has raised nearly $40 million in venture capital — to help grow its infectious disease product pipeline. Next year, that pipeline may include a second therapeutic candidate, for an equally deadly virus: the mosquito-borne dengue.

In a 2009 visit to Singapore as part of the Singapore-MIT Alliance for Research and Technology, Sasisekharan saw that the country was “ground zero” for dengue. Now Visterra is working to develop an antibody that broadly neutralizes all four dengue virus serotypes — and other viruses, including the West Nile virus, which is familiar to many in the United States.

“Apart from the flu, dengue is the biggest global health agent,” he says. “We’re trying to target diseases that are broadly prevalent in the world, but that a lot of people don’t really know about.”

Biotech entrepreneurship, here and there

Having found success with biotech startups, Sasisekharan has been working in developing countries with little venture capital — such as Thailand and Singapore — to help people start companies.

“In a lot of Asia, there’s this ‘valley of death,’ where angels and venture capitalists are only now beginning to fall in place,” he says. “We’ve come up with pragmatic ways to help people start companies in such a constrained context.”

Among other things, this includes promoting academic institutions as key players in biotech innovation and working with governments and pharmaceuticals to offer support.

Back home, however, the biotech industry in Kendall Square “has exploded,” Sasisekharan says, with advanced technology and unprecedented access to venture capital funding. “We’re experiencing a unique window for biotech companies to go public. That’s thanks, in part, to the venture capital community and MIT. It’s a melting pot of people, ideas, opportunities,” he says. “And fundamentally it’s the mindset: solving problems and focusing on things that have some inherent value to make a difference in the world.”