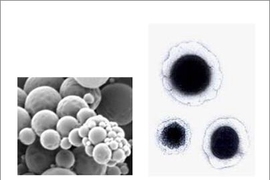 ↓ Download Image
Caption: Chemotherapy-loaded nanoparticles, left, form the core of the nanocell, right, as seen under the electron microscope. The outer lighter layer of the nanocell stores the drug that cuts blood supply after the nanocell has entered the tumor.
Credits: Image courtesy / Sasisekharan Lab

Caption:
Chemotherapy-loaded nanoparticles, left, form the core of the nanocell, right, as seen under the electron microscope. The outer lighter layer of the nanocell stores the drug that cuts blood supply after the nanocell has entered the tumor.
Credits:
Image courtesy / Sasisekharan Lab

Imagine a cancer drug that can burrow into a tumor, seal the exits and detonate a lethal dose of anti-cancer toxins, all while leaving healthy cells unscathed.

MIT researchers have designed a nanoparticle to do just that.

The work will be reported in the July 28 issue of Nature, with an accompanying commentary.

"We brought together three elements: cancer biology, pharmacology and engineering," said Ram Sasisekharan, a professor in MIT's Biological Engineering Division and leader of the research team.

"The fundamental challenges in cancer chemotherapy are its toxicity to healthy cells and drug resistance by cancer cells," Sasisekharan said. "So cancer researchers were excited about anti-angiogenesis," the theory that cutting off the blood supply can starve tumors to death. That strategy can backfire, however, because it also starves tumor cells of oxygen, prompting them to create new blood vessels and instigate metastasis and other self-survival activities.

The next obvious solution would be combining chemotherapy and anti-angiogenesis-dropping the bombs while cutting the supply lines. But combination therapy confronted an inherent engineering problem. "You can't deliver chemotherapy to tumors if you have destroyed the vessels that take it there," Sasisekharan said. Also, the two drugs behave differently and are delivered on different schedules: anti-angiogenics over a prolonged period and chemotherapy in cycles.

"We designed the nanocell keeping these practical problems in mind," he said. Using ready-made drugs and materials, "we created a balloon within a balloon, resembling an actual cell," explains Shiladitya Sengupta, a postdoctoral associate in Sasisekharan's laboratory.

In addition to Sasisekharan and Sengupta, the co-authors are David Eavarone, Ishan Capila and Ganlin Zhao of MIT's Biological Engineering Division; Nicki Watson of the Whitehead Institute for Biomedical Research; and Tanyel Kiziltepe of MIT's Department of Chemistry.

The team loaded the outer membrane of the nanocell with an anti-angiogenic drug and the inner balloon with chemotherapy agents. A "stealth" surface chemistry allows the nanocells to evade the immune system, while their size (200 nanometers) makes them preferentially taken into the tumor. They are small enough to pass through tumor vessels, but too large for the pores of normal vessels.

Once the nanocell is inside the tumor, its outer membrane disintegrates, rapidly deploying the anti-angiogenic drug. The blood vessels feeding the tumor then collapse, trapping the loaded nanoparticle in the tumor, where it slowly releases the chemotherapy.

The team tested this model in mice. The double-loaded nanocell shrank the tumor, stopped angiogenesis and avoided systemic toxicity much better than other treatment and delivery variations.

But it is patient survival and quality of life that really inspire this research, Sasisekharan said. Eighty percent of the nanocell mice survived beyond 65 days, while mice treated with the best current therapy survived 30 days. Untreated animals died at 20.

"It's an elegant technique for attacking the two compartments of a tumor, its vascular system and the cancer cells," said Judah Folkman of Children's Hospital Boston. "This is a very neat approach to drug delivery," said MIT Institute Professor Robert Langer.

The nanocell worked better against melanoma than lung cancer, indicating the need to tweak the design for different cancers. "This model enables us to rationally and systematically evaluate drug combinations and loading mechanisms," says Sasisekharan. "It's not going to stop here. We want to build on this concept."