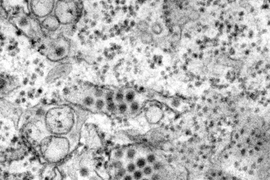 ↓ Download Image
Caption: This transmission electron micrograph depicts a number of round, dengue virus particles that were revealed in a tissue specimen.
Credits: Image: Frederick Murphy/Centers for Disease Control and Prevention

Caption:
This transmission electron micrograph depicts a number of round, dengue virus particles that were revealed in a tissue specimen.
Credits:
Image: Frederick Murphy/Centers for Disease Control and Prevention 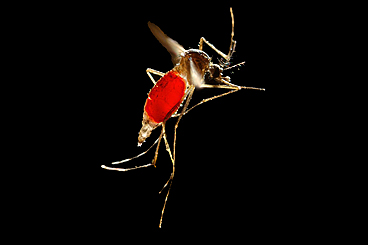 Nearly half of the world’s population is at risk of infection by the dengue virus, yet there is no specific treatment for the disease. Now a therapy to protect people from the virus could finally be a step closer, thanks to a team at MIT.

In a paper published today in the Proceedings of the National Academy of Sciences, the researchers, from MIT’s Koch Institute of Integrative Cancer Research, present a novel approach to developing a dengue therapy using mutated antibodies.

According to a study by the International Research Consortium on Dengue Risk Assessment, Management and Surveillance, up to 390 million people are infected with the dengue virus each year. For most people the mosquito-borne virus causes flulike symptoms, including fever, headache and joint pain. But for some, particularly children, the virus can develop into the far more serious dengue hemorrhagic fever, causing severe blood loss and even death.

Despite the threat posed by the disease, developing a vaccine against dengue has so far proved challenging, according to Ram Sasisekharan, the Alfred H. Caspary Professor of Biological Engineering at MIT. That’s because dengue is not one virus but four different viruses, or serotypes, each of which must be neutralized by the vaccine.

Protecting people from only one or some of the four viruses could cause them to develop the more severe form of dengue if they later become infected with one of the other serotypes, in a process known as antibody-dependent enhancement, Sasisekharan says. “That was the motivation for carrying out our study, to generate a fully neutralizing antibody that works for all four serotypes.” 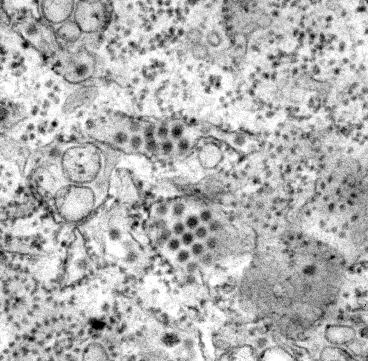 This transmission electron micrograph depicts a number of round, dengue virus particles.Image: Frederick Murphy/Centers for Disease Control and Prevention
Efforts to develop a therapeutic antibody for dengue are focused on a part of the virus called the envelope protein. “This is a very critical protein that allows the virus to latch on to the appropriate receptor within the host, to infect them, replicate and spread,” Sasisekharan says.

The envelope protein contains two regions of interest, known as the loop and the “A” strand. Research teams have previously attempted to engineer an antibody that targets the loop region of the virus protein, as this is known to be able to attack all four serotypes if targeted in the right way.

However, the antibodies that target the loop region tend to have low potency, meaning they are unable to completely neutralize the virus. This increases the risk of more severe secondary dengue infection.

So a team led by Sasisekharan decided instead to look for antibodies that target the “A” strand region of the protein. Such antibodies tend to have much higher potency, but they are unable to neutralize all four serotypes.

The researchers chose as their model an antibody known as 4E11, which has been shown in tests to neutralize dengue 1, 2 and 3, but not dengue 4. “We wanted to see if we could get good neutralizing activity to dengue 4, and also tweak the antibody to increase the potency associated with the other subtypes,” Sasisekharan says.

The authors mined existing antibody-antigen complexes to analyze the physical and chemical features that play an important role in their interaction, such as hydrogen bonding and ionic attraction. Taking a statistical approach, they then ranked these features in terms of their importance to each of the antibody-antigen interactions.

This significantly narrowed the number of possible changes, or mutations, the researchers needed to make antibody 4E11 in order to improve its ability to neutralize all four viruses, in particular dengue 4. “So rather than random screening, we used a statistically driven approach so we knew the regions to focus on, and what things we had to change,” Sasisekharan says.

As a result, the researchers came up with 87 possible mutations, which they were able to reduce to just 10 changes after further investigation.

The researchers have developed a novel computational method for predicting protein-protein interaction that captures the essential chemical and physical features of interacting surfaces, says Subhash Vasudevan, an associate professor in the Emerging Infectious Diseases Program at the Duke-NUS Graduate Medical School in Singapore.

“By learning and validating data from numerous three-dimensional structures of interacting antibody and protein complexes, the researchers gained valuable insights that enabled them to redesign a dengue virus envelope antibody to improve its binding by an astounding 450-fold,” Vasudevan says.

“The cross-reactive and pan-dengue neutralizing antibody was protective against all four serotypes in cell culture and in an animal model of infection,” he adds.

The MIT researchers are now preparing for potential preclinical trials, and hope to be ready to test the antibody on humans within the next two to three years. In the meantime, they are also investigating other targets for their immunotherapy approach, including the influenza virus.

This work was funded by the National Institutes of Health and the National Research Foundation Singapore through the Singapore-MIT Alliance for Research and Technology’s Infectious Diseases Research Program.