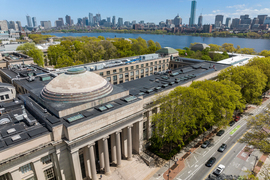 MIT has again been named the world’s top university by the QS World University Rankings, which were announced today. This is the 11th year in a row MIT has received this distinction.

The full 2022 edition of the rankings — published by Quacquarelli Symonds, an organization specializing in education and study abroad — can be found at TopUniversities.com. The QS rankings were based on academic reputation, employer reputation, citations per faculty, student-to-faculty ratio, proportion of international faculty, and proportion of international students.

MIT was also ranked the world’s top university in 12 of the subject areas ranked by QS, as announced in April of this year.

In an interview with QS Vice President Ben Sowter, Associate Provost Richard Lester reflected on the Institute’s success as a global leader of higher education. “No academic institution can be thought of – or can think of itself – in isolation,” said Lester. “We benefit from, and we depend on, a network of institutions with whom we exchange knowledge and ideas.”

QS World University Rankings rates MIT No. 1 in 12 subjects for 2022