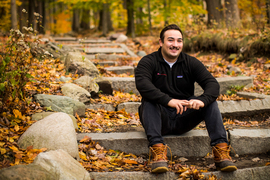 ↓ Download Image
Caption: MIT senior and varsity football captain Ben Delhees, who is double majoring in finance and mathematical economics, strives to create community both on and off the field.
Credits: Image: Adam Glanzman

Caption:
MIT senior and varsity football captain Ben Delhees, who is double majoring in finance and mathematical economics, strives to create community both on and off the field.
Credits:
Image: Adam Glanzman

As a star athlete in high school, Ben Delhees never dreamed he would one day attend the Massachusetts Institute of Technology. Delhees, an Ohio native, was more of a sports fanatic — he competed in everything from football to basketball to baseball. Yet, one cold November morning, he found himself walking across MIT’s football field as its newest recruit.

“At first, I was nervous, because I didn’t really know what to expect,” he says. “That changed after I met all the guys on the football team. Even though I was just a recruit, everybody was so inviting. There was a kind of family aspect to the staff that really drew me in.”

For the next two days of his visit, Delhees shadowed Kevin Lyons, a first-year student and fellow football player at the time. Between walking to Lyons’ classes and staying with his fraternity, Delta Kappa Epsilon, Delhees began to envision himself being part of the MIT community.

“What stood out to me about MIT was how often they preached the importance of working together as a team,” he recalls. “That’s what I’m all about. After that visit, I fell in love with the place and have never looked back.”

Prospective athletes who apply to MIT are subject to the same academically focused admissions process as all other applicants. After being admitted to the Class of 2021, he arrived on campus a month early to train for pre-season.

The trainings were a nonstop combination of workouts and meetings. Despite the exhaustion, the experience allowed Delhees to quickly bond with all 80 members of the team. “Even though it was mentally and physically challenging, I loved pre-season. You spend all day with the same people and that’s how you get so close,” he says. “It made me feel at home before I even started school.”

Getting to know his fellow teammates helped ease Delhees during the transition to campus. The required curriculum forced Delhees to take courses that were particularly challenging and brought the team together in a whole new way. “All the freshman players were going through the same classes, so it was awesome to have a bunch of friends that were sharing my experience,” he says.

Delhees’ commitment to teamwork also extended beyond his football friendships. He chose to create study groups that welcomed students from all backgrounds, athletes and nonathletes alike. “Unlike in high school, where it’s more common to have social barriers, MIT is great at making inclusive communities,” he says. “I really believe in that message. It doesn’t matter whether you’re in chess club or basketball; we’re in this together.”

After taking a variety of courses, Delhees decided to declare a double major in finance and mathematical economics. He believes that the two topics share an unexpected overlap with football. “To approach a market, you have to consider everyone’s background and decision-making process,” he explains. “It’s the same thing in football. You have to know where other people are coming from before you know where you are.”

Delhees was additionally inspired to pursue finance and economics after taking 15.501 (Introduction to Financial and Managerial Accounting) with Professor Joseph Weber. Conversations after class soon led to an immediate connection. Over the next two years, Weber has continued to serve as a mentor for Delhees’ academic interests. Their close friendship also led Delhees to pursue a year-long accounting research project in Weber’s lab.

The project, which required Delhees to summarize dense accounting data, eventually became much more. Delhees and Weber realized the research could be shared to help teach accounting to the general public. The work became the foundation for Blacktip Research, a startup Delhees co-founded with fellow student Matt Beveridge to educate young people on financial literacy.

“My co-founder and I want to teach simple investing principles in an interactive way, so more people my age can choose how to invest their money,” Delhees says. “With everything going on right now with GameStop and Robinhood, people deserve a better way to understand what’s happening. We’re currently working with professors at MIT Sloan School of Management to get our front-end launched. It’s overall been a very rewarding experience.”

In addition to his friendships made through classes and football, Delhees considers memories with his fraternity brothers as the best part of his MIT experience. Delhees is now the house manager of Delta Kappa Epsilon (DKE), the same fraternity that he stayed with during his early days as a recruit. The role has allowed him to advocate his team-oriented values as a priority for the house.

“I didn’t think I would join a fraternity at first. But after that first visit, I realized it felt more like 40 best friends living in a house together,” he says, fondly. “It’s the same type of atmosphere as the football team. Even if you’ve only known someone for a year, you know they’re willing to stick their head out for you.”

While living with 40 brothers can be challenging, Delhees says the group always finds ways to come together. His leadership and belief in shared camaraderie have guided members through all types of challenges, from cleanup to conflict resolution. Delhees remembers a time when all the house furniture had to be removed to meet a cleaning deadline. With music blasting and everyone helping, the stressful chore became a fun social event. “In the end, it took just a few hours to finish. Everyone was more than happy to be there, and I think that’s why we stay so close,” Delhees says. His brothers have also been there for Blacktip Research, providing encouragement and technical help whenever needed.

With graduation quickly approaching, Delhees hopes to find and create more community-focused atmospheres beyond MIT. He will be working for the next two years as an analyst at Stadium Capital, a hedge fund in Connecticut. The role will teach him more about public equity markets and the investment process.

“One of the exciting parts of the job is just the amount of learning I’m going to have to do,” he says. “There’s so many moving parts to markets that we’re never going to fully comprehend them. But by working together to understand each player’s unique circumstances, we might just have a chance.”