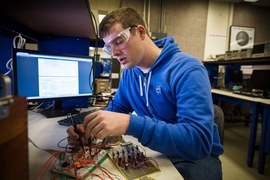 ↓ Download Image
Caption: “I fell in love with physics,” says senior Zachary Hulcher. “I appreciate light bouncing off a mirror, and smoke billowing up, and light going through it in a different way. … The small things I took for granted when I didn’t understand them, I appreciate now. Everything is just a little prettier.” 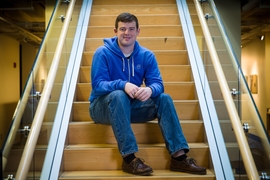 ↓ Download Image
Caption: “I fell in love with physics,” says senior Zachary Hulcher. “I appreciate light bouncing off a mirror, and smoke billowing up, and light going through it in a different way. … The small things I took for granted when I didn’t understand them, I appreciate now. Everything is just a little prettier.”

Caption:
“I fell in love with physics,” says senior Zachary Hulcher. “I appreciate light bouncing off a mirror, and smoke billowing up, and light going through it in a different way. … The small things I took for granted when I didn’t understand them, I appreciate now. Everything is just a little prettier.”

Zachary Hulcher was once set on becoming a lawyer. In high school, he took part in mock trials and competed in youth judicial, playing the role of legal counsel and presenting cases in front of a student jury. He says his inspiration came partly from the television show Law and Order: “There’s drama, there’s action, you send people to jail, and you get to argue with people — and I loved arguing with people.”

But all that changed one day, sometime during his junior year, when he happened to flip through his physics textbook. In an idle moment at school, he turned to the very back of the book and started to read the chapter about special relativity.

Physics, he discovered, put mathematics and science into an almost fantastical perspective. “Ideas that come out of that one chapter are time travel, atomic bombs, things warping when they go really fast, and all these things that shouldn’t be real, but are,” Hulcher says.

Hulcher is currently a senior at MIT, majoring in physics as well as computer science and electrical engineering, with a minor in math. “I love the creative process and figuring out how elegant solutions to real problems arise out of seeming chaos,” he says.

He is a recipient of the 2017 Marshall Scholarship, awarded each year to up to 40 U.S. students who will pursue graduate degrees at universities in the United Kingdom. Next year, Hulcher will be working toward a PhD in high energy physics at Cambridge University, where he hopes to work on both experimental and theoretical problems of the Standard Model of particle physics, which governs every aspect of the known universe except for gravity.

Hulcher was born and raised in Montgomery, Alabama. His mother and father are managers for Alabama’s environmental management agency. Hulcher grew up playing basketball with his younger brother in the family’s backyard. The brothers, who towered over their classmates — Hulcher is 6 feet 4 inches tall and his “little” brother, Jacob, is 6 feet 8 inches — joined their church league, and eventually played for their middle and high school teams.

Along with basketball, Hulcher played football and was on the track and field team, balancing an unrelenting schedule of games and practices with an increasingly challenging course load. Hulcher attended the Montgomery Catholic Preparatory School System from kindergarten through high school in Montgomery, where he was valedictorian and a National Merit Scholar. In his freshman year he began taking math and physics classes with Joe Profio, a teacher who, recognizing that Hulcher was one of the top students in his class, urged him to join the school’s math teams.

Hulcher soon found himself taking long drives to math competitions across the state with Profio and his classmates. During those drives, Profio would talk about math at a deeper level than he could present in class, and Hulcher credits his passion for physics and math to these inspiring talks.

“Our conversations obliterated the idea that the only beauty in the world is found in an imaginary place in a book — beauty was all around me, if I would only look through the right lens,” Hulcher says.

It was around that time that Hulcher says “the wheels started cranking to do science.” The answer to how and where to direct this newfound momentum came from an unlikely source, another TV show.

“I was watching NCIS one day, and one of the characters is from MIT, and I thought, ‘I’m starting to like more science. I should apply there,’ and I did,” Hulcher recalls.

When Hulcher set foot on the campus for the first time — also the first time he had been anywhere north of Washington, D.C. — he was immediately drawn to the physics seminars held during Campus Preview Weekend.

“I remember an event called something like ‘physics til you drop,’ and two students were standing at a blackboard, doing physics until 5 or 6 am, long past when I could stay awake,” Hulcher says. “People would ask them questions about quantum mechanics, string theory, general relativity, anything, and they would try to answer them on the board. I was pretty hooked.”

He quickly landed on physics as a major but also chose computer science and electrical engineering, a decision based largely on conversations with his roommate, who was also majoring in the subject. When Hulcher took classes that explored quantum computing — the idea that quantum elements such as elementary particles can perform certain calculations vastly more efficiently than classical computers — he realized “all of computing is not just a computer science problem. It’s a physics problem. That’s just cool.”

In the summer following his sophomore year, Hulcher traveled to Geneva, Switzerland, to work at the Compact Muon Solenoid experiment (CMS) at CERN’s Large Hadron Collider, the world’s largest and most powerful particle accelerator. There, he helped to implement an alarm system that monitors the accelerator’s major systems and distributes information to key people in the event of a failure.

He returned again the following summer, this time as a theorist. The LHC uses giant magnets to steer beams of atoms, such as lead ions, toward each other at close to the speed of light. Hulcher, working as a research assistant with Krishna Rajagopal of MIT's Department of Physics and the Center for Theoretical Physics, was interested in the hot plasma of quarks and gluons produced when two lead ions collide.

“The plasma doesn’t last very long before it returns to some other state of matter,” Hulcher says. “You don’t even have time to blast it with light to see it; it would just disappear before the light got there. So you need to use events inside it to study it.”

Those events involve jets of particles that spew out from the plasma following a collision between two lead ions. Hulcher worked with Rajagopal and Daniel Pablos, a University of Barcelona graduate student, to help implement a model for how these jets of particles propagate through the resulting plasma. Hulcher recently helped to present the team’s results at a workshop in Paris and is finishing up a paper to submit to a journal — his first publication.

The prism of physics

In addition to his research work, Hulcher has racked up a good amount of teaching experience. As a teaching assistant for MIT’s Department of Physics, he has graded weekly problem sets for classes in classical mechanics and electricity and magnetism. He tutors fellow students in electrical engineering and computer science subjects, and he has spent the last year as eligibles chair of the MIT chapter of the engineering honor society Tau Beta Pi. Through the MIT International Science and Technology Initiatives (MISTI), Hulcher has traveled around the world, to Italy, Mexico, and most recently, Israel, teaching students subjects including physics, electrical engineering, and entrepreneurship.

Of all the relationships he’s developed through his time at MIT, he counts those with most of his teammates as some of the strongest. Hulcher joined MIT’s football team as a freshman offensive lineman; he says he will remember hanging out on long nights, p-setting with his friends from the football team. He will also remember MIT as a really long rollercoaster, he says.

As for what’s next, Hulcher says the plan for now is “to keep liking physics.” If that happens, he hopes to become a researcher and professor, to help students see the world through physics.

“I fell in love with physics,” Hulcher says. “I appreciate light bouncing off a mirror, and smoke billowing up, and light moving through it in a different way. I appreciate looking up at the stars and thinking about what’s out there. The small things I took for granted when I didn’t know much about them, I appreciate now. Everything is just a little prettier.”