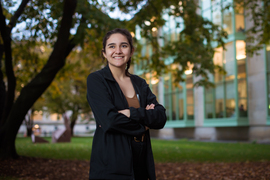 Ana Reyes Sanchez and her family sat in the living room, watching a movie together, just like any other night. Although she can’t recall which movie it was, she remembers seeing a shot of MIT’s Great Dome surrounded by students, and declaring, “I’m gonna go there!” Her parents smiled, thinking little of what that their 7-year-old daughter had just said. Little did they know, this childhood dream would become a reality for their child.

Born in Mexico City, Reyes Sanchez moved to Minnesota when she was 5 years old. Although she didn’t speak much English at the time, she and her sister were able to adjust because of the many international programs offered through the Mayo Clinic, where her father worked. After living there for about five years, her family moved to Arizona for six more years, then eventually landed in San Diego.

Because she moved around so much, Reyes Sanchez learned to appreciate consistency, which is how she fell in love with math. “You don’t need to know English well to do math,” she says. She appreciated the universality of the subject; it was a form of stability in her constantly mobile world.

She loved math all throughout middle and high school, eventually finding a second love in philosophy when she studied it during her senior year as a required class. She partially attributes this interest to her teacher at the time, who nurtured her love of the subject. She was particularly drawn to problems of ethics and rationality, as she remembers having difficulty making decisions growing up, experiencing anxiety from constantly asking questions like, “What is the right thing to do?” and “What am I supposed to be doing?”

Reyes Sanchez thought she would mainly study math at MIT. However, she was pleasantly surprised when she found out the school had a philosophy department. An initial decision to take a few philosophy classes led to a concentration, then a minor; ultimately she declared a double major in philosophy and mathematics.

She sees the two disciplines intersect in many ways. “I enjoy the branch of philosophy that looks at decisions and rationality. And that tends to involve a lot of math!” she says. She enjoys evaluating ethical problems using the tools of probability and data sets.

Outside of the classroom, Reyes Sanchez is an active mentor and advocate for other MIT students. She is co-president of her sorority, AEPhi, where she sees her leadership role as an opportunity to make the sorority more accessible and inclusive for students. Reyes Sanchez became committed to mentorship after having received guidance herself from the senior students in her sorority. Her participation in the Interphase Edge program, a two-year summer enrichment experience for incoming first-year students, also reinforced her passion for mentorship, as she recalls this time as a chance to develop deep friendships with other participants.

“I want to be able to help on an individual basis with the underclassmen I know. I feel an obligation to pass it on,” she says.

As a member of the Council for Math Majors (COMM), Reyes Sanchez works to present student perspectives to faculty and administration in the math department. Her role is to reach out to resource offices to help highlight any cultural problems or oversights that may arise.

Within COMM, Reyes Sanchez frequently meets with other organizations working to make MIT a more inclusive place, such as Office of Minority Education and Social Justice Programming and Cross-Cultural Engagement (SPXCE). She is currently working on a project to gather feedback from students who have felt overlooked or marginalized in the math department. “Those assumptions hurt, and they stick with you,” she says. She sees these testimonials as a way to communicate to the math department how they can be more accessible and inclusive for all students.

She says her philosophy major has sharpened her determination to do good things at MIT and beyond. While she used to have vague, lofty goals about how to change the world, she feels she now has the tools and ability to develop specific action plans.

The healing power of writing

Part of this ability to articulate herself also stems from Reyes Sanchez’ love of writing, which she cultivates as a columnist for MIT’s student newspaper, The Tech, and as a blogger for MIT Admissions. Although she began journaling long before she came to MIT, she finds that writing her thoughts down and sharing them with a wider audience is cathartic.

Her first article for The Tech, “A ten-step guide to living in a pandemic,” was a culmination of her thought processes and observations during the pandemic. “For the first time in a lot of peoples’ lives, they were starting to think about the ethical decisions of tiny decisions that they didn’t know how to deal with,” she says. While at first, she didn’t know if people would connect with what she was saying, she was pleasantly surprised when she got messages from people talking about how helpful her article was.

“Some of the best parts about being vulnerable with people publicly is that you manage to help a lot of people that you otherwise might not have,” she says.

She compares her career trajectory to that of Elle Woods from the movie “Legally Blonde,” noting how they both wanted to attend law school, were presidents of their sororities, and lived in Cambridge. She sees this comparison as inspiring, noting that if she could decide where she was going to school on a whim when she was 7, she has the will and drive to attend law school.

“When I was seven, I said I was going to go to MIT and then I did; so, what’s stopping me now?”

Exploring the human stories behind the data

At the crossroads of language, technology, and empathy

The language of change