Exploring the human stories behind the data 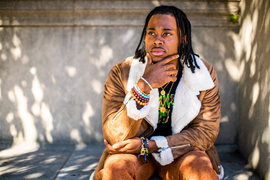 ↓ Download Image
Caption: Brian Williams, an MIT senior majoring in biological engineering and minoring in Black studies, has leveraged his engineering background to explore interests in public health and social justice, specifically looking at how the medical sector can uplift and support communities of color.
Credits: Image: Adam Glanzman

Caption:
Brian Williams, an MIT senior majoring in biological engineering and minoring in Black studies, has leveraged his engineering background to explore interests in public health and social justice, specifically looking at how the medical sector can uplift and support communities of color.
Credits:
Image: Adam Glanzman

Shaking in the back of a police cruiser, handcuffs digging into his wrists, Brian Williams was overwhelmed with fear. He had been pulled over, but before he was asked for his name, license, or registration, a police officer ordered him out of his car and into back of the police cruiser, saying into his radio, “Black male detained.” The officer’s explanation for these actions was: “for your safety and mine.”

Williams walked away from the experience with two tickets, a pair of bruised wrists, and a desire to do everything in his power to prevent others from experiencing the utter powerlessness he had felt.

Now an MIT senior majoring in biological engineering and minoring in Black studies, Williams has continued working to empower his community. Through experiences in and out of the classroom, he has leveraged his background in bioengineering to explore interests in public health and social justice, specifically looking at how the medical sector can uplift and support communities of color.

Williams grew up in a close-knit family and community in Broward County, Florida, where he found comfort in the routine of Sunday church services, playing outside with friends, and cookouts on the weekends. Broward County was home to him — a home he felt deeply invested in and indebted to.

“It takes a village. The Black community has invested a lot in me, and I have a lot to invest back in it,” he says.

Williams initially focused on STEM subjects at MIT, but in his sophomore year, his interests in exploring data science and humanities research led him to an Undergraduate Research Opportunities Program (UROP) project in the Department of Political Science. Working with Professor Ariel White, he analyzed information on incarceration and voting rights, studied the behavior patterns of police officers, and screened 911 calls to identify correlations between how people described events to how the police responded to them.

In the summer before his junior year, Williams also joined MIT’s Civic Data Design Lab, where he worked as a researcher for the Missing Data Project, which uses both journalism and data science to visualize statistics and humanize the people behind the numbers. As the project’s name suggests, there is often much to be learned from seeking out data that aren’t easily available. Using datasets and interviews describing how the pandemic affected Black communities, Williams and a team of researchers created a series called the Color of Covid, which told the stories behind the grim statistics on race and the pandemic.

The following year, Williams undertook a research-and-development internship with the biopharmaceutical company Amgen in San Francisco, working on protein engineering to combat autoimmune diseases. Because this work was primarily in the lab, focusing on science-based applications, he saw it as an opportunity to ask himself: “Do I want to dedicate my life to this area of bioengineering?” He found the issue of social justice to be more compelling.

At the same time, Williams was drawn toward tackling problems the local Black community was experiencing related to the pandemic. He found himself thinking deeply about how to educate the public, address disparities in case rates, and, above all, help people.

Working through Amgen’s Black Employee Resource Group and its Diversity, Inclusion, and Belonging Team, Williams crafted a proposal, which the company adopted, for addressing Covid-19 vaccination misinformation in Black and Brown communities in San Mateo and San Francisco County. He paid special attention to how to frame vaccine hesitancy among members of these communities, understanding that a longstanding history of racism in scientific discovery and medicine led many Black and Brown people to distrust the entire medical industry.

“Trying to meet people where they are is important,” Williams says.

This experience reinforced the idea for Williams that he wanted to do everything in his power to uplift the Black community.

“I think it’s only right that I go out and I shine bright because it’s not easy being Black. You know, you have to work twice as hard to get half as much,” he says.

As the current political action co-chair of the MIT Black Students’ Union (BSU), Williams also works to inspire change on campus, promoting and participating in events that uplift the BSU. During his Amgen internship, he also organized the MIT Black History Month Takeover Series, which involved organizing eight events from February through the beginning of spring semester. These included promotions through social media and virtual meetings for students and faculty. For his leadership, he received the “We Are Family” award from the BSU executive board.

Williams prioritizes community in everything he does, whether in the classroom, at a campus event, or spending time outside in local communities of color around Boston.

“The things that really keep me going are the stories of other people,” says Williams, who is currently applying to a variety of postgraduate programs. After receiving MIT endorsement, he applied to the Rhodes and Marshall Fellowships; he also plans to apply to law school with a joint master’s degree in public health and policy.

Ultimately, Williams hopes to bring his fight for racial justice to the policy level, looking at how a long, ongoing history of medical racism has led marginalized communities to mistrust current scientific endeavors. He wants to help bring about new legislation to fix old systems which disproportionately harm communities of color. He says he aims to be “an engineer of social solutions, one who reaches deep into their toolbox of social justice, pulling the levers of activism, advocacy, democracy, and legislation to radically change our world — to improve our social institutions at the root and liberate our communities.” While he understands this is a big feat, he sees his ambition as an asset.

“I’m just another person with huge aspirations, and an understanding that you have to go get it if you want it,” he says. “You feel me? At the end of the day, this is just the beginning of my story. And I’m grateful to everyone in my life that’s helping me write it. Tap in.”

At the crossroads of language, technology, and empathy

Seeing the values behind the numbers