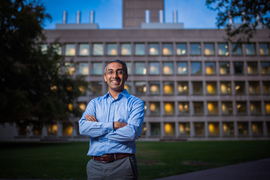 ↓ Download Image
Caption: MIT chemistry professor Yogesh Surendranath joined the MIT faculty in 2013. “One of the most attractive features of the department is its balanced composition of early career and senior faculty. This has created a nurturing and vibrant atmosphere that is highly collaborative,” he says. “But more than anything else, it was the phenomenal students at MIT that drew me back. Their intensity and enthusiasm is what drives the science.”
Credits: Photo: Gretchen Ertl

Caption:
MIT chemistry professor Yogesh Surendranath joined the MIT faculty in 2013. “One of the most attractive features of the department is its balanced composition of early career and senior faculty. This has created a nurturing and vibrant atmosphere that is highly collaborative,” he says. “But more than anything else, it was the phenomenal students at MIT that drew me back. Their intensity and enthusiasm is what drives the science.”
Credits:
Photo: Gretchen Ertl

Electricity plays many roles in our lives, from lighting our homes to powering the technology and appliances we rely on every day. Electricity can also have a major impact at the molecular scale, by powering chemical reactions that generate useful products.

“All of our research is about decarbonizing the energy ecosystem,” says Surendranath, who recently earned tenure in MIT’s Department of Chemistry and serves as the associate director of the Carbon Capture, Utilization, and Storage Center, one of the Low-Carbon Energy Centers run by the MIT Energy Initiative (MITEI).

Although his work has many applications in improving energy efficiency, most of the research projects in Surendranath’s group have grown out of the lab’s fundamental interest in exploring, at a molecular level, the chemical reactions that occur between the surface of an electrode and a liquid.

“Our goal is to uncover the key rate-limiting processes and the key steps in the reaction mechanism that give rise to one product over another, so that we can, in a rational way, control a material's properties so that it can most selectively and efficiently carry out the overall reaction,” he says.

Born in Bangalore, India, Surendranath moved to Kent, Ohio, with his parents when he was 3 years old. Bangalore and Kent happen to have the world’s leading centers for studying liquid crystal materials, the field that Surendranath’s father, an organic chemist, specialized in.

“My dad would often take me to the laboratory, and although my parents encouraged me to pursue medicine, I think my interest in science and chemistry probably was sparked at an early age, by those experiences,” Surendranath recalls.

Although he was interested in all of the sciences, he narrowed his focus after taking his first college chemistry class at the University of Virginia, with a professor named Dean Harman. He decided on a double major in chemistry and physics and ended up doing research in Harman’s inorganic chemistry lab.

After graduating from UVA, Surendranath came to MIT for graduate school, where his thesis advisor was then-MIT professor Daniel Nocera. With Nocera, he explored using electricity to split water as a way of renewably generating hydrogen. Surendranath’s PhD research focused on developing methods to catalyze the half of the reaction that extracts oxygen gas from water.

He got even more involved in catalyst development while doing a postdoctoral fellowship at the University of California at Berkeley. There, he became interested in nanomaterials and the reactions that occur at the interfaces between solid catalysts and liquids.

“That interface is where a lot of the key processes that are involved in energy conversion occur in electrochemical technologies like batteries, electrolyzers, and fuel cells,” he says.

In 2013, Surendranath returned to MIT to join the faculty, at a time when many other junior faculty members were being hired.

“One of the most attractive features of the department is its balanced composition of early career and senior faculty. This has created a nurturing and vibrant atmosphere that is highly collaborative,” he says. “But more than anything else, it was the phenomenal students at MIT that drew me back. Their intensity and enthusiasm is what drives the science.”

Among the many electrochemical reactions that Surendranath’s lab is trying to optimize is the conversion of carbon dioxide to simple chemical fuels such as carbon monoxide, ethylene, or other hydrocarbons. Another project focuses on converting methane that is burned off from oil wells into liquid fuels such as methanol.

“For both of those areas, the idea is to convert carbon dioxide and low-carbon feedstocks into commodity chemicals and fuels. These technologies are essential for decarbonizing the chemistry and fuels sector,” Surendranath says.

Other projects include improving the efficiency of catalysts used for water electrolysis and fuel cells, and for producing hydrogen peroxide (a versatile disinfectant). Many of those projects have grown out of his students’ eagerness to chase after difficult problems and follow up on unexpected findings, Surendranath says.

“The true joy of my time here, in addition to the science, has been about seeing students that I've mentored grow and mature to become independent scientists and thought leaders, and then to go off and launch their own independent careers, whether it be in industry or in academia,” he says. “That role as a mentor to the next generation of scientists in my field has been extraordinarily rewarding.”

Although they take their work seriously, Surendranath and his students like to keep the mood light in their lab. He often brings mangoes, coconuts, and other exotic fruits in to share, and enjoys flying stunt kites — a type of kite that has multiple lines, allowing them to perform acrobatic maneuvers such as figure eights. He can also occasionally be seen making balloon animals or blowing extremely large soap bubbles.

“My group has really cultivated an extraordinarily positive, collaborative, uplifting environment where we go after really hard problems, and we have a lot of fun along the way,” Surendranath says. “I feel blessed to work with people who have invested so much in the research effort and have built a culture that is such a pleasure to work in every day.”