Inexpensive new catalysts can be fine-tuned 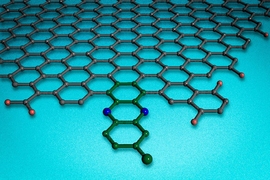 ↓ Download Image
Caption: A new carbon-based catalyst can bond to the edges of two-dimensional sheets of graphene.
Credits: Courtesy of the researchers 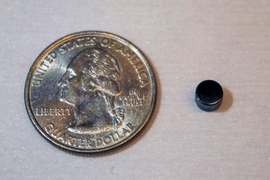 ↓ Download Image
Caption: An example of the type of test electrodes the researchers use.

Caption:
A new carbon-based catalyst can bond to the edges of two-dimensional sheets of graphene.
Credits:
Courtesy of the researchers

Caption:
An example of the type of test electrodes the researchers use.

Researchers at MIT and Lawrence Berkeley National Laboratory have developed a new type of catalyst that can be tuned to promote desired chemical reactions, potentially enabling the replacement of expensive and rare metals in fuel cells.

The new catalyst is carbon-based, made of graphite with additional compounds bonded to the edges of two-dimensional sheets of graphene that make up the material. By adjusting the composition and amounts of these added compounds, the characteristics of the catalyst can be adjusted to favor specific chemical reactions.

The new catalytic material is described in a paper published in JACS, the Journal of the American Chemical Society, by MIT assistant professor of chemistry Yogesh Surendranath and three collaborators.

Catalysts enhance the rate of a chemical reaction but are not consumed in the process. As a result, the repeated action of very small amounts of a catalyst can have large and long-lasting effects.

“What we wanted to do was to figure out a way to bridge those two worlds,” Surendranath explains. His team was able to accomplish that by taking graphite and finding a way to chemically modify its surface to give it the desired tunability.

The basic material used is pure carbon, which is “the universal electrode material” in batteries and fuel cells, Surendranath says. By finding a way to make this material tunable in the same ways as molecular catalysts, the researchers are providing an opening to a new approach to the design of such materials, which are also a key part of many chemical manufacturing processes.

In addition to their possible uses in fuel cells, such new catalysts could also be useful for enhancing chemical reactions, such as reducing carbon dioxide to convert it into a usable fuel, Surendranath says. This could reduce emissions of a principal greenhouse gas that fosters climate change, and transform it into a useful, renewable fuel.

The initial finding described in this paper is “just one piece of what we believe is a large iceberg,” Surendranath adds, since the basic ingredient is “a dirt cheap material that we are modifying using well-known chemistry.”

One frequent barrier to taking systems that work in the laboratory and making them into practical, marketable products is the ability to scale up the production process. “You need to be able to scale efficiently,” Surendranath says. The fact that the basis for the new catalyst is “a class of materials that are already made at scale, for commodities like paint and rubber,” should make scaling up their process relatively straightforward, he says: “All the keys to that are already in place.”

Surendranath says that this finding is particularly exciting because chemists “usually take a very precise refined material and then engineer some of its properties. But in this case, it allows us to take a material that is cheap and abundant, and turn it into something very valuable. It’s a different paradigm.”

"Electrocatalysis will play an increasingly important role for the interconversion of electrical and chemical energy as solar and other renewable sources of electrical energy become cheaper and more available,” says Clark Landis, a professor of chemistry at the University of Wisconsin at Madison, who was not involved in this work. "Large scale electrocatalysis requires electrodes that are inexpensive, robust, easily fabricated, and exhibit high, tunable catalytic activity ... The principles of graphite modification demonstrated in this work likely will form the basis of new, rationally-designed electrocatalytic materials.”

Landis adds that "this paper has many layers of detail that make for compelling characterization and a complete story. But the presentation is so clear and systematic as to appear almost simple. The reader is left wondering 'Why didn’t I think of that?' These are hallmarks of high quality science.”

The research team also included postdoc Tomohiro Fukushima at MIT and Walter Drisdell and Junko Yano at Lawrence Berkeley National Laboratory in California. The work was supported, in part, by the U.S. Department of Energy.