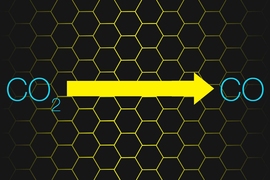 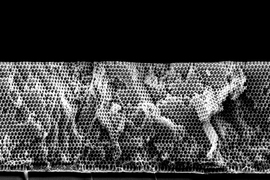 Caption:
A silver-based catalyst material with a porous honeycomb-like structure, developed by the MIT team, can selectively transform carbon dioxide (CO2) to carbon monoxide (CO).
Credits:
Courtesy of the researchers

A new catalyst material developed by chemists at MIT provides key insight into the design requirements for producing liquid fuels from carbon dioxide, the leading component of greenhouse gas emissions. The findings suggest a route toward using the world’s existing infrastructure for fuel storage and distribution, without adding net greenhouse emissions to the atmosphere.

The new catalyst takes the process only through its first stage — converting carbon dioxide (CO2) to carbon monoxide (CO), explains assistant professor of chemistry Yogesh Surendranath, the senior researcher on a new study describing the advance. But that’s a key initial step toward converting CO2 to other chemicals including fuels, he says; there are already established methods for converting CO and hydrogen to a variety of liquid fuels and other products.

The study appears this week in the international chemistry journal Angewandte Chemie. Its authors are Youngmin Yoon, a graduate student at MIT; Anthony Shoji Hall, a former MIT postdoc who is now a professor of materials science at Johns Hopkins University; and Surendranath, who is the Paul M. Cook Career Development Assistant Professor at MIT.

“The problem in CO2 conversion is how to selectively convert it,” Surendranath says.

While this basic molecule can form the basis of virtually any carbon-based chemistry, the tricky part is to create a system in which CO2 consistently converts to a single end-product that can then be further processed into the desired material. The new system, he says, provides just that kind of selective, specific conversion pathway — and, in fact, a whole range of such pathways. And if the hydrogen and CO are produced using solar or wind-generated power, the entire process could be carbon neutral.

“What you want is a tunable catalyst,” he says, and that’s just what this team developed, in the form of a highly porous silver electrode material. Depending on the exact formulation of this material, he says, it’s possible to design variations of this catalyst where “each one may be designed for a different application.”

The researchers learned that by tuning the dimensions of the material’s pores they could get the system to produce the desired proportion of CO in the end-product.

Most efforts to “tune” the selectivity of silver catalysts for CO production have focused on varying the surface active site chemistry. However, with this formulation, a material called a silver inverse opal, it is the pore structure of the material that determines the effect. “What we found was very simple,” Surendranath says. “You can tune the pore dimensions to tune the selectivity and activity of the catalyst, without modifying the surface active site chemistry.”

The porous material can be made by depositing tiny polystyrene beads on a conductive electrode substrate, then electrodepositing silver on the surface, then dissolving away the beads, leaving pores whose size is determined by that of the original beads. Because of the way spheres naturally organize themselves when packed together, this method produces a honeycomb-like structure of hexagonal cells, Surendranath explains.

It turns out that varying the thickness of this porous catalyst produces a double effect: As the porous inverse opal get thicker, the catalyst more strongly promotes the production of CO from CO2 by up to three times, while also suppressing an alternative reaction, the production of H2 (hydrogen gas), by as much as tenfold. Using this combined effect, production of CO can be easily varied to make up anywhere from 5 to 85 percent of the reaction’s output. The study’s results provide fundamental insights that may be applicable to designing other catalyst materials for fuel production from CO2.

This advance represents just one step in the conversion of carbon dioxide into usable fuels, and the initial demonstration is just at a small laboratory scale. So, much work still remains for this to become a practical approach to manufacturing transportation fuels. But because the selectivity and efficiency of this initial conversion step places an upper limit on the overall efficiency of fuel production from CO2, in technical terms, Surendranath says, the work provides key fundamental insight into how to engineer carbon-neutral technologies for replacing existing fossil-fuel systems — while still being able to use all of the existing infrastructure of gas stations, delivery vehicles, and storage tanks.

Ultimately, conversion plants could be connected directly to the emissions flow from fossil-fuel power plants, for example, to turn the CO2 into fuel instead of releasing it into the atmosphere at all. “We’re very optimistic” that the process can be successfully developed, Surendranath says. If so, that could represent “the closing of the anthropogenic carbon cycle,” through the use of renewably generated electricity to turn greenhouse gas emissions into fuel.

In essence, he says, the net process would be doing the same thing that plants and cyanobacteria did on Earth millions of years ago to produce fossil fuels in the first place: taking carbon dioxide out of the air and converting it into more complex molecules. But in this case, instead of taking place over millennia, the process needs to be replicated very quickly in a lab or factory. “It’s the same thing that got us these fuels in the first place,” he says, “but we need to do it faster and more efficiently than natural photosynthesis.”

This paper could have “huge impacts on the basic science of important reactions to produce fuels,” says Ken Sakaushi, a researcher at the National Institute for Materials Science in Tsukuba, Japan, who was not involved in this research. “Recently, many works just focus on the application side and thus make less of a contribution on basic science. However, this work seems to try to contribute to this important issue on science from the basics.” Because of that, this research has “high value,” he says.

The research was supported by the Air Force Office of Scientific Research and the MIT Department of Chemistry, and is part of the research taking place through the MIT Energy Initiative’s Low-Carbon Energy Centers, established as part of the Institute’s Plan for Action on Climate Change.