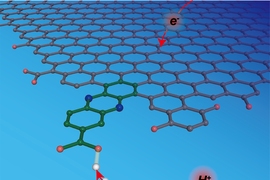 ↓ Download Image
Caption: By incorporating precise molecular sites (depicted in green) into graphite electrodes (shown as the gray lattice), the researchers were able to study the interactions of a proton (a hydrogen nucleus, shown as H+) and an electron (e-) with the surface, and to construct a model for proton- and electron-transfer steps that play key roles in energy conversion reactions.
Credits: Image: Tomohiro Fukushima

Caption:
By incorporating precise molecular sites (depicted in green) into graphite electrodes (shown as the gray lattice), the researchers were able to study the interactions of a proton (a hydrogen nucleus, shown as H+) and an electron (e-) with the surface, and to construct a model for proton- and electron-transfer steps that play key roles in energy conversion reactions.
Credits:
Image: Tomohiro Fukushima

One of the most fundamental chemical reactions that takes place in energy-conversion systems — including catalysts, flow batteries, high-capacity energy-storing supercapacitors, and systems to make fuels using solar energy — has now been analyzed in detail. The results could inform the development of new electrode or catalyst materials with properties precisely tuned to match the energy levels needed for their functions.

The findings are described today in the journal ACS Central Science, in a paper by MIT graduate student Megan Jackson, postdoc Michael Pegis, and professor of chemistry Yogesh Surendranath.

Virtually every energy-conversion reaction involves protons and electrons reacting with each other, and in functional devices these reactions typically take place on the surface of a solid, such as a battery electrode. Until now, Surendranath says, “we haven’t had a very good fundamental understanding of what governs the thermodynamics of electrons and protons coming together at an electrode. We don’t understand those thermodynamics at a molecular level,” and without that knowledge, selecting materials for energy devices comes down largely to trial and error.

Knowing those two numbers for a given molecule makes it possible to predict and subsequently tune reactivity. But when the reactions are taking place on an electrode surface instead, there has been no way to separate out the two different factors, because proton transfer and electron transfer occur simultaneously.

“If we knew how to split up the energy into a proton transfer term and an electron transfer term, it would guide us in designing a new catalyst or a new battery or a new fuel cell in which those reactions must occur at the right energy levels to store or release energy with the optimal efficiency.” The reason no one had this understanding before, he says, was because it has been historically almost impossible to control electrode surface sites with molecular precision. Even estimating a pKa for the surface site to try to get at the energy associated with proton transfer first requires molecular-level knowledge of the site.

A new approach makes this kind of molecular-level understanding possible. Using a method they call “graphite conjugation,” Surendranath and his team incorporate specifically chosen molecules that can donate and accept protons into graphite electrodes such that the molecules become part of the electrodes.

By electronically conjugating the selected molecules to graphite electrodes, “we have the power to design surface sites with molecular precision,” Jackson says. “We know where the proton is binding to the surface at a molecular level, and we know the energy associated with the proton transfer reaction at that site.”

By conjugating molecules with a wide range of pKa values and experimentally measuring the corresponding energies for proton-coupled electron transfer at the graphite-conjugated sites, they were able to construct a framework that describes the entire reaction.

“What we’ve developed here is a molecular-level model that allows us to partition the overall thermodynamics of simultaneously transferring an electron and a proton to the surface of an electrode into two separate components: one for protons and one for electrons,” Jackson says. This model closely mirrors the models used to describe this class of reactions in molecules, and should thus enable researchers to better design electrocatalysts and battery materials using simple molecular design principles.

“What this teaches us,” Surendranath says, “is that if we want to design a surface site that can transfer and accept protons and electrons at the optimal energy, there are two design levers we can control. We can control the sites on the surface and their local affinity for the proton — that’s their pKa. And we can also tune it by changing the intrinsic energy of the electrons in the solid,” which is correlated to a factor called the work function.

That means, according to Surendranath, that “we now have a general framework for understanding and designing proton-coupled electron transfer reactions at electrode surfaces, using the intuition that chemists have about what types of sites are very basic or acidic, and what types of materials are very oxidizing or reducing.” In other words, it now provides researchers with “systematic design principles,” that can help guide the selection of electrode materials for energy conversion reactions.

The new insights can be applied to many electrode materials, he says, including metal oxides in supercapacitors, catalysts involved in making hydrogen or reducing carbon dioxide, and the electrodes operating in fuel cells, because all of those processes involve the transfer of electrons and protons at the electrode surface.

Electron-proton transfer reactions are ubiquitous in virtually all electrochemical catalytic reactions, says Surendranath, “so knowing how they occur on a surface is the first step toward being able to design catalytic materials with a molecular-level understanding. And we’re now, fortunately, able to cross that milestone.”

This work  “is truly pathbreaking,” says James Mayer, a professor of chemistry at Yale University, who was not involved in this work. “The interconversion of chemical and electrical energy — electrocatalysis — is a core part of many new scenarios for renewable energy. This is often accomplished with expensive rare metals such as platinum. This work shows, in an unexpected way, a new behavior of relatively simple carbon electrodes. This opens opportunities for new ways of thinking and eventually new technologies for energy conversions.”

Jeff Warren, an assistant professor of chemistry at Simon Fraser University in Burnaby, Bristish Columbia, who was not associated with this research, says that this work provides an important bridge between extensive research on such proton-electron reactions in molecules, and a lack of such research for reactions on solid surfaces.

“This creates a fundamental knowledge gap that workers in the field (myself included) have been grappling with for at least a decade,” he says. “This work addresses this problem in a truly satisfying way. I anticipate that the ideas described in this manuscript will drive thinking in the field for quite some time and will build crucial bridges between fundamental and applied/engineering researchers.”

This research was supported by the U.S. Department of Energy, the National Institutes of Health, the Sloan Foundation, and the Research Corporation for Science Advancement.

Inexpensive new catalysts can be fine-tuned