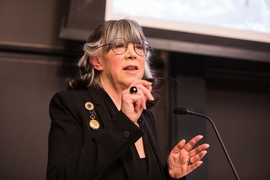 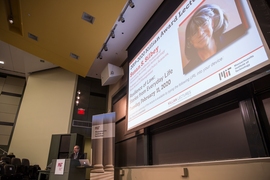 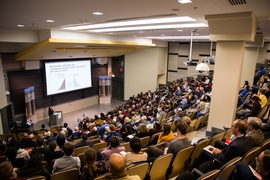 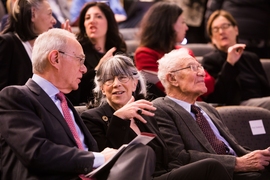 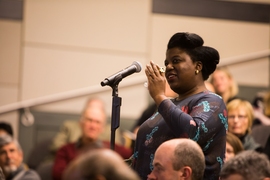 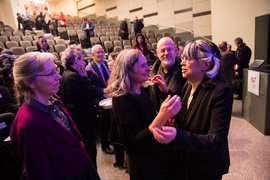 Caption:
A crowd of about 250 people attended as Susan Silbey, the Leon and Anne Goldberg Professor of Humanities, Sociology and Anthropology, and Professor of Behavioral and Policy Sciences at the Sloan School of Management, delivered the 48th Annual James R. Killian, Jr. Faculty Achievement Award Lecture at MIT on Tuesday, February 11, 2020.
Credits:
Image: Jake Belcher

Toward the end of her Killian Lecture at MIT on Tuesday afternoon, Susan Silbey showed the audience a photo of a lawn chair on a city street, being used to save a parking spot during a snowstorm.

That’s a familiar image to Boston-area residents. But in this case, the picture had a particular symbolism. Silbey’s scholarship has helped establish a groundbreaking framework for thinking about the interaction of legal codes and civic attitudes. So when people use chairs to hold parking spots, which is illegal, it reflects one specific attitude toward the law, which Silbey helped codify: that the law is there to be negotiated, challenged, and defeated.

That is not the only view people have of the law. Some people regard the law as impartial and just, and others believe the entire legal system is oppressive. But to endure, Silbey emphasized in her remarks, a legal system cannot simply be regarded as being “outside of everyday life. … It must be located as securely within, to be powerful, to be effective, to be a rule of law.”

And, she added, “it must be experienced in property relations, in market exchanges, in contracts … and in chairs, holding parking spots in newly shoveled, snowy streets.”

Thus even little legal evasions, as they play out over time, “are evidence of law’s endurance in everyday life,” noted Silbey, who is the Leon and Anne Goldberg Professor of Humanities, Sociology, and Anthropology, and a professor of behavioral and policy sciences at the Sloan School of Management.

Silbey outlined her influential ideas on Tuesday, discussing her scholarship while accepting MIT’s James R. Killian, Jr. Faculty Achievement Award, the highest such honor at the Institute. The award was established in 1971 to honor Killian, who served as MIT’s 10th president, from 1948 to 1959, and chair of the MIT Corporation, from 1959 to 1971.

“I find it very difficult to find the exact words to express how deeply and truly honored I am by this award,” Silbey said, to an audience of about 250 people in MIT’s Room 10-250. “I thank you.”

The roots of Silbey’s work, she recounted for the audience, go back to her childhood, when her father, a enforcement supervisor in New York State’s labor department, would take her to his office in lower Manhattan. He seemed to know the legal status of every nearby business — whether they had underpaid workers, committed other infractions, or complied with the law.

“It only dawned on me a few years ago that I have spent my entire career studying my father’s work,” Silbey said, adding that the key question she sought to address has been, “How do we empirically observe the rule of law?”

Indeed, Silbey added, “If we think about law as statues, constitutions, or even courtrooms and juries, it cannot tell us what the law means to most people.”

For much of the lecture, Silbey discussed the influential three-part typology of attitudes toward the law that she developed with Patricia Ewick, a professor of sociology at Clark University. Silbey and Ewick introduced their concepts in the 1998 book, “The Common Place of Law: Stories from Everyday Life.”

As Silbey and Ewick see it, people generally adopt one of three main postures vis-à-vis the legal system: They can be “before” the law, “with” the law, or “against” the law.

Those who are “before” the law follow the rules closely and regard the legal system as a stable, impartial edifice.

“Legality is imagined as an objective realm of disinterested action, removed and distant from the lives of individuals,” Silbey said. “This is also the law’s story about itself, of its own awesome grandeur.”

By contrast, people who are “with” the law regard the legal system as a game, with victory possible through skill, experience, good lawyers, and other resources.

In this view, Silbey remarks, “There is no [objective] justice — you either win, or you lose.”

Finally, those who are “against” the law view the entire system as an expression of unequal power, and adopt a posture of resistance to it.

For these people, Silbey said, “legality is understood to be arbitrary and capricious,” although, she noted, people who are “against” the law are “rarely cynical” about it. They believe in the possibility of justice, but think the system denies it to them.

Significantly, Silbey added, “We need all three to explain law’s enduring force and organizing presence.” We cannot plausibly claim the law is always impartial, but it cannot sustain legitimacy if always regarded as a game.

Silbey was introduced by MIT chair of the faculty Rick Danheiser, who formally presented the Killian Award to her, telling Silbey it had been granted for “your insatiable curiosity, your extraordinary record of professional accomplishment, your generous mentorship, and last but not least … your important leadership contributions at MIT.”

At MIT, Silbey has also extended her research into studies of gender roles in science and engineering, while also extensively evaluating issues of compliance with the law in laboratory settings.

Silbey’s record of service at the Institute includes tenures as chair of the MIT faculty, from 2017 to 2019; secretary of the faculty; and head of the anthropology section, from 2006 to 2014. In 2017, she even received a “Rookie Advisor” award for excellence in advising first-year undergraduates.

In her closing remarks, Silbey made a point of thanking her faculty and staff colleagues, co-authors, family members, and particularly “my beloved late husband, Robert Silbey, who’s always been there for my entire life, more than 50 years.” Robert Silbey was an MIT faculty member from 1966 to 2011. A professor of chemistry, he served as dean of the School of Science from 2000 to 2007.

“He is the reason I have been at MIT,” Silbey added. “These years have been marvelous. I used to say to him daily … I have never been happier in my work than the years I have been at MIT, capped by this most auspicious award. And I thank you very much.”

The evolving definition of a gene

A lifelong search for new catalysts