The evolving definition of a gene 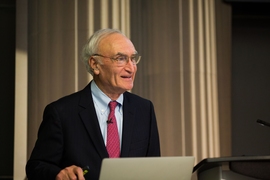 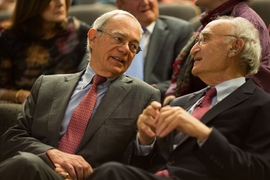 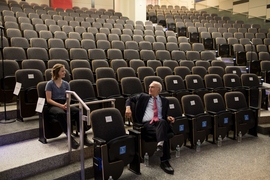 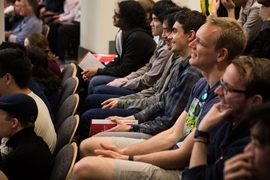 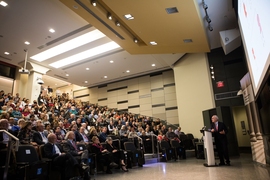 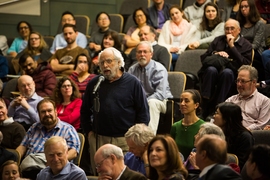 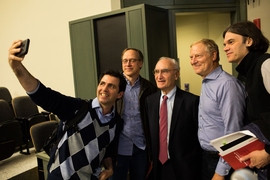 More than 50 years ago, scientists came up with a definition for the gene: a sequence of DNA that is copied into RNA, which is used as a blueprint for assembling a protein.

In recent years, however, with the discovery of ever more DNA sequences that play key roles in gene expression without being translated into proteins, this simple definition needed revision, according to Gerald Fink, the Margaret and Herman Sokol Professor in Biomedical Research and American Cancer Society Professor of Genetics in MIT’s Department of Biology.

Fink, a pioneer in the field of genetics, discussed the evolution of this definition during yesterday’s James R. Killian Jr. Faculty Achievement Award Lecture, titled, “What is a Gene?”

“In genetics, we’ve lost a simple definition of the gene — a definition that lasted over 50 years,” he said. “But loss of the definition has spawned whole new fields trying to understand the unknown information in non-protein-coding DNA.”

Established in 1971 to honor MIT’s 10th president, James Killian, the Killian Award recognizes extraordinary professional achievements by an MIT faculty member. Fink, who is also a member and former director of the Whitehead Institute, was honored for his achievements in developing brewer’s yeast as “the premier model for understanding the biology of eukaryotes” — organisms whose cells have nuclei.

“He is among the very few scientists who can be singularly credited with fundamentally changing the way we approach biological problems,” says the award citation, read by Susan Silbey, chair of the MIT faculty, who presented Fink with the award.

Growing in a “sleepy” town on Long Island, Fink had a keen interest in science, which spiked after the Soviets launched the first satellite to orbit the Earth.

“In 1957, when I went out in our backyard, I was hypnotized by the new star in the sky, as Sputnik slowly raced toward the horizon,” he said. “Overnight, science became a national priority, energized by the dread of Soviet technology and technological superiority.”

After earning his bachelor’s degree at Amherst College, Fink began studying yeast as a graduate student at Yale University, and in 1976, he developed a way to insert any DNA sequence into yeast cells.

This discovery transformed biomedical research by allowing scientists to program yeast to produce any protein they wanted, as long as they knew the DNA sequence of the gene that encoded it. It also proved industrially useful: More than half of all therapeutic insulin is now produced by yeast, along with many other drugs and vaccines, as well as biofuels such as ethanol.

At that time, scientists were operating with a straightforward definition of the gene, based on the “central dogma” of biology: DNA makes RNA, and RNA makes proteins. Therefore, a gene was defined as a sequence of DNA that could code for a protein. This was convenient because it allowed computers to be programmed to search the genome for genes by looking for specific DNA sequences bracketed by codons that indicate the starting and stopping points of a gene.

In recent decades, scientists have done just that, identifying about 20,000 protein-coding genes in the human genome. They have also discovered genetic mechanisms involved in thousands of human diseases. Using new tools such as CRISPR, which enables genome editing, cures for such diseases may soon be available, Fink believes.

“The definition of a gene as a DNA sequence that codes for a protein, coupled with the sequencing of the human genome, has revolutionized molecular medicine,” he said. “Genome sequencing, along with computational power to compare and analyze genomes, has led to important insights into basic science and disease.”

However, he pointed out, protein-coding genes account for just 2 percent of the entire human genome. What about the rest of it? Scientists have traditionally referred to the remaining 98 percent as “junk DNA” that has no useful function.

In the 1980s, Fink began to suspect that this junk DNA was not as useless as had been believed. He and others discovered that in yeast, certain segments of DNA could “jump” from one location to another, and that these segments appeared to regulate the expression of whatever genes were nearby. This phenomenon was later observed in human cells as well.

“That alerted me and others to the fact that ‘junk DNA’ might be making RNA but not proteins,” Fink said.

Since then, scientists have discovered many types of non-protein-coding RNA molecules, including microRNAs, which can block the production of proteins, and long non-coding RNAs (lncRNAs), which have many roles in gene regulation.

“In the last 15 years, it has been found that these are critical for controlling the gene expression of protein-coding genes,” Fink said. “We’re only now beginning to visualize the importance of this formerly invisible part of the genome.”

Such discoveries demonstrate that the traditional definition of a gene is inadequate to encompass all of the information stored in the genome, he said.

“The existence of these diverse classes of RNA is evidence that there is no single physical and functional unit of heredity that we can call the gene,” he said. “Rather, the genome contains many different categories of informational units, each of which may be considered a gene.”

“A community of scholars”

In selecting Fink for the Killian Award, the award committed also cited his contributions to the founding of the Whitehead Institute, which opened in 1982. At the time, forming a research institute that was part of MIT yet also its own entity was considered a “radical experiment,” Fink recalled.

Though controversial at the time, with heated debate among the faculty, establishing the Whitehead Institute laid the groundwork for many other research institutes that have been established at MIT, and also helped to attract biotechnology companies to the Kendall Square area, Fink said.

“As we now know, MIT made the right decision. The Whitehead turned out to be a successful pioneer experiment that in my opinion led to the blossoming of the Kendall Square area,” he said.

Fink was hired as one of the first faculty members of the Whitehead Institute, and served as its director from 1990 to 2001, when he oversaw the Whitehead’s contributions to the Human Genome Project. He recalled that throughout his career, he has collaborated extensively not only with other biologists, but with MIT colleagues in fields such as physics, chemical engineering, and electrical engineering and computer science.

“MIT is a community of scholars, and I was welcomed into the community,” he said.

Revising the textbook on introns