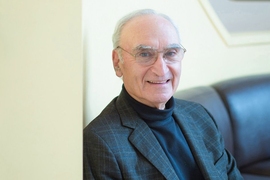 Gerald Fink, an MIT biologist and former director of the Whitehead Institute, has been named the recipient of the 2018-2019 James R. Killian Jr. Faculty Achievement Award.

Fink, the Margaret and Herman Sokol Professor in Biomedical Research and American Cancer Society Professor of Genetics, was honored for his work in the development of baker’s yeast, Saccharomyces cerevisiae. Fink’s work transformed yeast into the leading model for studying the genetics of eukaryotes, organisms whose cells contain nuclei.

“Professor Fink is among the very few scientists who can be singularly credited with fundamentally changing the way we approach biological problems. He has made numerous seminal contributions to understanding the fundamentals of all nucleated life on the planet, significantly advancing our knowledge of many cellular processes critical to life systems and human diseases,” according to the award citation, which was read at the May 16 faculty meeting by Michael Strano, the chair of the Killian Award selection committee and the Carbon P. Dubbs Professor of Chemical Engineering at MIT.

Established in 1971 to honor MIT’s 10th president, James Killian, the Killian Award recognizes extraordinary professional achievements by an MIT faculty member. “From understanding how cells are formed and function, to understanding cancer and developing insights into aging, his research has proved critical to modern day science,” the award committee wrote of Fink.

Fink, who was inspired to go into science partly by the Soviet Union’s launch of the Sputnik satellite in 1957, began studying yeast while working toward his PhD at Yale University in the 1960s.

“I studied yeast as a graduate student, when it was an extremely unpopular organism,” Fink recalls. “In fact, I was cautioned by my thesis advisor not to tackle it because it was an intractable system.”

Despite that warning, Fink dove into studies of yeast metabolism — in particular, the mechanism that yeast uses to regulate amino acid biosynthesis. At the time, yeast engineering was impeded because there was no way to insert a gene into yeast cells. Then, in 1976, Fink developed a way to insert any DNA into yeast cells, thus allowing researchers to study gene functions in eukaryotic cells in a way that was previously impossible.

“That technology dramatically changed everything, because it made it possible to insert a gene from any organism into yeast,” Fink says.

Fink’s advance allowed scientists to manipulate the yeast genome at will, turning the organism into a cell factory. This technology enabled the current large-scale production of vaccines, drugs (including insulin), and biofuels in yeast.

Fink, who joined the MIT faculty in 1982, currently studies the fungus Candida albicans — which can cause thrush, yeast infections, and severe blood infections — in hopes of developing new antifungal drugs. His lab recently discovered how this human pathogen switches back and forth from its usual yeast form to an invasive filamentous form.

Fink taught genetics to MIT undergraduates and graduate students for many years, and as director of the Whitehead Institute from 1990 to 2001 oversaw the Whitehead’s contribution to the Human Genome Project.

“The Human Genome Project would not have happened here at MIT if it had not been for the unique structure of the Whitehead Institute, which was able to move quickly,” Fink says. “We committed resources and space from the Whitehead to propel the project forward.”

In 2003, the Whitehead/MIT Center for Genome Research became the cornerstone of the newly launched Broad Institute. “MIT’s premier place in the world of biological research is due in no small part to Professor Fink’s selfless, tireless, and generally unheralded work in creating and nurturing these institutions,” reads the award citation.

In 2003, Fink chaired the National Academy of Sciences Committee on Research Standards and Practices to Prevent the Destructive Application of Biotechnology, which provided the nation with guidance on how to deal with the threat of bioterrorism without jeopardizing scientific progress.

Fink has received many other honors, including the National Academy of Sciences Award in Molecular Biology, the George W. Beadle Award from the Genetics Society of America, and the Gruber International Prize in Genetics. He has served as president of both the American Association for the Advancement of Science and the Genetics Society of America, and he is an elected member or fellow of the National Academy of Sciences, the American Academy of Arts and Sciences, the Institute of Medicine, and the American Philosophical Society.