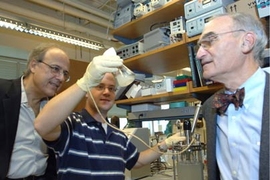 MIT scientists have engineered yeast that can improve the speed and efficiency of ethanol production, a key component to making biofuels a significant part of the U.S. energy supply.

Currently used as a fuel additive to improve gasoline combustibility, ethanol is often touted as a potential solution to the growing oil-driven energy crisis. But there are significant obstacles to producing ethanol: One is that high ethanol levels are toxic to the yeast that ferments corn and other plant material into ethanol.

By manipulating the yeast genome, the researchers have engineered a new strain of yeast that can tolerate elevated levels of both ethanol and glucose, while producing ethanol faster than un-engineered yeast. The work is reported in the Dec. 8 issue of Science.

Fuels such as E85, which is 85 percent ethanol, are becoming common in states where corn is plentiful; however, their use is mainly confined to the Midwest because corn supplies are limited and ethanol production technology is not yet efficient enough.

Boosting efficiency has been an elusive goal, but the MIT researchers, led by Hal Alper, a postdoctoral associate in the laboratories of Professor Gregory Stephanopoulos of chemical engineering and Professor Gerald Fink of the Whitehead Institute, took a new approach.

The key to the MIT strategy is manipulating the genes encoding proteins responsible for regulating gene transcription and, in turn, controlling the repertoire of genes expressed in a particular cell. These types of transcription factors bind to DNA and turn genes on or off, essentially controlling what traits a cell expresses.

The traditional way to genetically alter a trait, or phenotype, of an organism is to alter the expression of genes that affect the phenotype. But for traits influenced by many genes, it is difficult to change the phenotype by altering each of those genes, one at a time.

The MIT researchers are the first to use this new approach, which is akin to altering the central processor of a computer (transcription factors) rather than individual software applications (genes), says Fink, an MIT professor of biology and a co-author on the paper.

In this case, the researchers targeted two different transcription factors. They got their best results with a factor known as a TATA-binding protein, which when altered in three specific locations caused the over-expression of at least a dozen genes, all of which were found to be necessary to elicit an improved ethanol tolerance, thus allowing that strain of yeast to survive high ethanol concentrations.

Because so many genes are involved, engineering high ethanol tolerance by the traditional method of overexpressing individual genes would have been impossible, says Alper. Furthermore, the identification of the complete set of such genes would have been a very difficult task, Stephanopoulos adds.

The prospect of using this approach to engineer similar tolerance traits in industrial yeast could dramatically impact industrial ethanol production, a multi-step process in which yeast plays a crucial role. First, cornstarch or another polymer of glucose is broken down into single sugar (glucose) molecules by enzymes, then yeast ferments the glucose into ethanol and carbon dioxide.

Other co-authors on the Science paper are Joel Moxley, an MIT graduate student in chemical engineering, and Elke Nevoigt of the Berlin University of Technology.

A version of this article appeared in MIT Tech Talk on December 13, 2006 (download PDF).