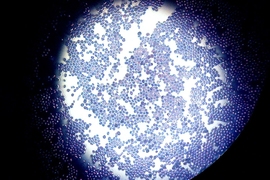 Yeast are commonly used to transform corn and other plant materials into biofuels such as ethanol. However, large concentrations of ethanol can be toxic to yeast, which has limited the production capacity of many yeast strains used in industry.

Now Stephanopoulos and colleagues at MIT and the Whitehead Institute for Biomedical Research have identified a new way to boost yeast tolerance to ethanol by simply altering the composition of the medium in which the yeast are grown. They report the findings, which they believe could have a significant impact on industrial biofuel production, in today’s issue of the journal Science.

Ethanol and other alcohols can disrupt yeast cell membranes, eventually killing the cells. The MIT team found that adding potassium and hydroxide ions to the medium in which yeast grow can help cells compensate for that membrane damage. By making these changes, the researchers were able to boost yeast’s ethanol production by about 80 percent. They also showed that this approach works with commercial yeast strains and other types of alcohols, including propanol and butanol, which are even more toxic to yeast.

“The more we understand about why a molecule is toxic, and methods that will make these organisms more tolerant, the more people will get ideas about how to attack other, more severe problems of toxicity,” says Stephanopoulos, one of the senior authors of the Science paper.

“This work goes a long way to squeezing the last drop of ethanol from sugar,” adds Gerald Fink, an MIT professor of biology, member of the Whitehead Institute, and the paper’s other senior author. Postdoc Felix Lam is the paper’s lead author, and graduate student Adel Ghaderi also contributed to the study.

The research team began this project searching for a gene or group of genes that could be manipulated to make yeast more tolerant to ethanol, but this approach did not yield much success. However, when the researchers began to experiment with altering the medium in which yeast grow, they found some dramatic results.

By augmenting the yeast’s environment with potassium chloride, and increasing the pH with potassium hydroxide, the researchers were able to dramatically boost ethanol production. They also found that these changes did not affect the biochemical pathway used by the yeast to produce ethanol: Yeast continued to produce ethanol at the same per-cell rate as long as they remained viable. Instead, the changes influenced their electrochemical membrane gradients — differences in ion concentrations inside and outside the membrane, which produce energy that the cell can harness to control the flow of various molecules into and out of the cell.

Ethanol increases the porosity of the cell membrane, making it very difficult for cells to maintain their electrochemical gradients. Increasing the potassium concentration and pH outside the cells helps them to strengthen the gradients and survive longer; the longer they survive, the more ethanol they make.

“By reinforcing these gradients, we’re energizing yeast to allow them to withstand harsher conditions and continue production. What’s also exciting to us is that this could apply beyond ethanol to more advanced biofuel alcohols that upset cell membranes in the same way,” Lam says.

The researchers found that they could also prolong survival, but not as much, by engineering the yeast cells to express more potassium and proton pumps, which are located in the cell membrane and pump potassium in and protons out.

Before yeast begin their work producing ethanol, the starting material, usually corn, must be broken down into glucose. A significant feature of the new MIT study is that the researchers did their experiments at very high concentrations of glucose. While many studies have examined ways to boost ethanol tolerance at low glucose levels, the MIT team used concentrations of about 300 grams per liter, similar to what would be found in an industrial biofuel fermenter.

“If you really want to be relevant, you’ve got to go to these levels. Otherwise, what you learn at low ethanol levels is not likely to translate to industrial production,” Stephanopoulos says.

Lonnie Ingram, director of the Florida Center for Renewable Chemicals and Fuels at the University of Florida, describes the MIT team’s discovery as “remarkable and unexpected.”

“Few would have anticipated these results, which show that increasing electrochemical gradients across membranes provide a dramatic increase in alcohol tolerance,” Ingram says. “This discovery will have direct applications in commercial processes for alcohol production from high concentrations of sugar.”

In more recent experiments, the MIT researchers have used this method to bump ethanol productivity even higher than reported in the Science paper. They are also working on using this approach to boost the ethanol yield from various industrial feedstocks that, because of starting compounds inherently toxic to yeast, now have low yields.

The research was funded by the MIT Energy Initiative and the Department of Energy.

Niina Heikkinen reports for Scientific American that MIT researchers have identified a new way to make yeast more ethanol-tolerant. The researchers were able to improve “alcohol tolerance and extend the amount of time that individual cells could produce ethanol.”