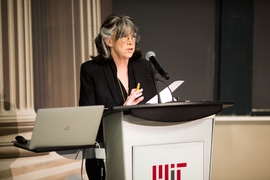 Susan Silbey, an MIT sociologist whose pathbreaking work has examined the U.S. legal system as experienced in everyday life, has been named the recipient of the 2019-2020 James R. Killian Jr. Faculty Achievement Award.

The Killian Award is the highest honor the Institute faculty bestows on one of its members, and is granted to one professor per year.

“It is most special to have people recognize the work you have done,” Silbey says. “It’s extraordinarily gratifying and humbling.” She adds: “I take pride that this is for social science.”

Silbey’s research has long examined the relationship between abstract law and daily life, illuminating the varied ways people conceive of the law, and in turn obey, manipulate, or struggle against it. Her much-lauded 1998 book, “The Common Place of Law,” co-authored with Patricia Ewick, explored these issues in American society broadly. More recently, Silbey has produced original studies about the relationship between law and the everyday practices of science, exploring how laboratories, for instance, vary in their interpretations of environmental, health, and safety regulations while conducting complex and challenging experiments.

“Professor Silbey is a world-renowned sociologist of law, celebrated for her groundbreaking work on legal consciousness and regulatory governance, most recently in scientific contexts,” states Silbey’s award citation, which also notes that “in order to understand how the rules of law operate, we need to see how they are interpreted, defended, negotiated, and resisted by people as they do their jobs and go about their daily lives.”

At MIT, Silbey has also extensively studied gender roles in science and engineering. She has produced numerous empirical studies and papers developing the concept of “professional role confidence,” a highly gendered phenomenon that can explain why talented women may decline to pursue careers in the STEM fields.

“We are delighted to have this opportunity to honor Professor Susan S. Silbey for her insatiable intellectual curiosity, unstoppable productivity, and overwhelmingly generous mentorship and leadership,” the citation adds.

Silbey was already quite familiar with MIT even before then; her husband was the late Robert Silbey, former head of MIT’s Department of Chemistry, director of the Center for Materials Science and Engineering, and dean of the School of Science from 2000 to 2007.

While continuing her research, Silbey has been a highly active faculty citizen within the MIT community. Among many other things, she is currently chair of the MIT faculty and has helped guide the faculty input into the development of the MIT Stephen A. Schwarzman College of Computing. From 2006 to 2014, Silbey was head of the Anthropology Section at MIT, leading its expansion and a round of new faculty hires.

“I have the most marvelous colleagues,” Silbey says. “That has to be understood. … I’ve never met an academic group like this. And they are just superb at what they do. The books they write, and the teaching in this department, is extraordinary.”

Silbey also praises the excellence of the sociologists at MIT Sloan, with whom she has supervised dozens of doctoral students and regularly teaches graduate courses on social theory and research methods for the social sciences.