Senior Michelle Xu’s varied interests all involve a desire to understand the universe. “I was just never particularly picky about which way to figure it out,” she says.
Becky Ham | MIT News correspondent
Publication Date:
Press Inquiries 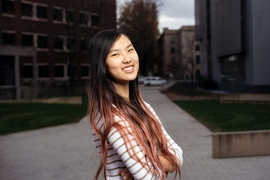 ↓ Download Image
Caption: During the Independent Activities Period in 2018, senior Michelle Xu worked with the volunteer group Cross Cultural Solutions at the Ritsona refugee camp in Greece, through the Priscilla King Gray Public Service Center. “I may not make a career out of public service, but I am a human being, and just like any other human being, helping the world is important to me,” Xu explains.
Credits: Image: Ian MacLellan 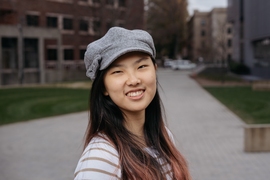 Caption:
During the Independent Activities Period in 2018, senior Michelle Xu worked with the volunteer group Cross Cultural Solutions at the Ritsona refugee camp in Greece, through the Priscilla King Gray Public Service Center. “I may not make a career out of public service, but I am a human being, and just like any other human being, helping the world is important to me,” Xu explains.
Credits:
Image: Ian MacLellan

A day in the life of Michelle Xu might include attending a quantum gravity seminar over Zoom, followed by some reading on the philosophy of time, capped off by a couple hours of writing fiction.

If these activities seem wildly diverse, for Xu they all “emerge from the same place: this desire to understand how the universe works,” she says. “I was just never particularly picky about which way to figure it out.”

Xu is a senior majoring in physics and mathematics, with an added focus on philosophy. Her studies have centered on large questions in cosmology, including looking at the earliest days of the expanding universe through their impact on primordial black holes with Professor Alan Guth in the MIT Center for Theoretical Physics. Lately Xu has been studying high energy theory and quantum gravity under the guidance of Professor Daniel Harlow, both topics which she hopes to continue studying in graduate school at Stanford University next fall. Throughout her time in the physics department, professors Robert Jaffe, Tracy Slatyer, and David Kaiser have been strong role models and mentors as well, she says. “My path in physics has been shaped and encouraged by all of these people, and without them, I wouldn’t be where I am today.”

Although she was interested in physics when she first came to MIT, it was the research experience that confirmed for her that she was on the right career path. “My biggest doubt was, OK, so I can do [problem sets], and I enjoy thinking about these concepts, but if I were tossed a bunch of equations and had to create something myself, could I actually do this?” Xu recalls. “Each summer as I worked on a different research project, I became more and more convinced that this was something I could do.”

At home in Pennsylvania during the coronavirus pandemic, Xu is continuing her research with Guth and hopes to meet virtually with Harlow as well. She is staying touch with friends through social media, even starting a book club while they are scattered throughout the country. “I’ve been stripped of some of my usual responsibilities, like running clubs, so I’m focusing more on personal interests like writing and  some puzzling topics in physics and philosophy,” she says.

Xu’s parents are scientists, and she “was raised in a household where everything was approached from a scientific perspective,” she says. They watched a lot of science documentaries, like Brian Greene’s “The Elegant Universe,” that raised early questions about the nature of reality.

It was the class 24.02 (Moral Problems and the Good Life) that inspired Xu to delve deeper into philosophy as another way to probe reality. She later discovered that most of her philosophical interests lie in metaphysics and not ethics, but the problems were nevertheless interesting enough to get her hooked initially. She recalls one class discussion centered around “morality and meaning in one’s life, in relation to ideas like motivation and duty,” that sparked an intense discussion with the class’s teaching assistant. “I got nerd sniped,” Xu jokes. “When someone poses such an interesting question or argument, you have to just drop everything to reply to it.”

The TA invited her to sit in on a graduate philosophy reading group, and Xu also joined the MIT Undergraduate Philosophy Club and became a member of its executive board. She spent the spring 2019 semester at Oxford University studying philosophy and physics and in the summer participated in a weeklong summer school on mathematical philosophy for female students at Ludwig Maximilian University.

The jargon of academic philosophy can be as dense as physics terminology, Xu admits, “but I think everyone could use a little philosophy in their lives. … I think questions about life and the world around us can be structured in fascinating ways through the different modes of thinking in philosophy.”

Thoughts about morality and responsibility came into focus for Xu during the Independent Activities Period in 2018, when she worked with the volunteer group Cross Cultural Solutions at the Ritsona refugee camp in Greece, through the Priscilla King Gray Public Service Center. People have asked her how the volunteer work fits in with her other academic interests, and she says the short answer is that it doesn’t.

“I may not make a career out of public service, but I am a human being, and just like any other human being, helping the world is important to me,” Xu explains. “Out there, I can do what any human can do … do laundry or distribute food, and help people through an incredibly difficult time of their lives.”

Xu shared her experiences at the refugee camp in writing, another long-time interest of hers. Inspired by the interdisciplinary science magazine Nautilus and looking for writing partners, Xu founded “Chroma,” MIT’s student-run science and humanities magazine. As editor-in-chief, she has been proud to encourage new writers, artists, and designers on campus to cross-pollinate ideas.

“I think MIT is one of the few places where something like this can blossom, because everyone here is interested in the sciences in some way,” she says.

Xu mostly writes fiction these days, which she calls “variably OK, but hopefully improving.” Last fall she took the class 21W.755 (Writing and Reading Short Stories) to sharpen her skills, “because I have these things that I want to express in my writing but feel like I lack the technique to do. But especially now that I’m quarantined, I’m trying to write more — just getting the reps in.”

Writing also helps her grapple with the nature of reality in a different way, she says. “To write is to build another reality. And to build something, you have to understand it.”

Despite her consistent interest in the fundamental nature of reality, Xu says she does sometimes worry that perhaps she is spread across too many departments. “If I want to do something significant and contribute to this world, does that mean I am lacking focus to do that correctly?”

“But I think you have to stay true to doing the things that pull you in, and that’s the only way you can make a significant contribution to the world.”

An entrepreneur finds his way to MIT

Singing for joy and service