An entrepreneur finds his way to MIT

Introduced to the Institute through MITx and MIT Bootcamps, Jakub Chudik is now a senior in EECS and CTO of his own startup.
Shafaq Patel | MIT News correspondent
Publication Date:
Press Inquiries 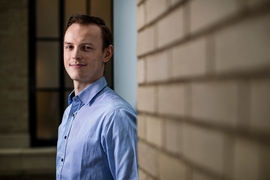 ↓ Download Image
Caption: MIT senior Jakub Chudik became interested in medical technology, especially related to cancer, after his younger brother, who was a toddler at the time, was diagnosed with cancer during Chudik’s first year of high school.
Credits: Image: Adam Glanzman 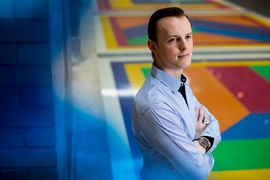 Caption:
MIT senior Jakub Chudik became interested in medical technology, especially related to cancer, after his younger brother, who was a toddler at the time, was diagnosed with cancer during Chudik’s first year of high school.
Credits:
Image: Adam Glanzman

Jakub Chudik went to China for the first time on his dad’s business trip. A translator communicated in English, and Chudik translated to Slovak, his father’s native language. Just a few years later, as a rising junior at MIT, Chudik was in China again — this time to pitch his own business to Chinese investors.

He was pitching the startup he co-founded: ConquerX, which aims to develop a new type of blood test for detecting early-stage cancers. As chief technology officer, Chudik has high hopes for his company, but he’s also focused on finishing his senior year and graduating with a computer science and engineering degree.

Chudik began his journey to MIT as an entrepreneurially minded high school student in a small town in Slovakia. There, he discovered the free online courses offered by MITx on the edX platform.

He had learned English at his bilingual school and was interested in helping his mother grow her small accounting business, so he completed MITx’s Entrepreneurship 101 and 102 courses. From there, he applied and was accepted to the MIT Global Entrepreneurship Bootcamp.

Through the MIT Bootcamp, a weeklong innovation and leadership program on campus for people from across the world, Chudik — who at age 18 was one of the youngest in the group — conceptualized a business idea with a couple of other participants. Among them was Chudik’s current business partner, Deborah Zanforlin, who had the idea for the technology on which ConquerX is based. After the program, he decided to apply to MIT.

“I loved how welcoming the environment at MIT was,” Chudik recalls. “I felt I could be myself and always find support and guidance. Especially being able to have a frank one-on-one discussion with a professor made a big impression on me at the time.”

Chudik became interested in medical technology, especially related to cancer, after his younger brother, who was a toddler at the time, was diagnosed with cancer during Chudik’s first year of high school. His brother is healthy now, but that experience was an eye-opener for Chudik.

“I had never had such a bad disease so close to me before. And I realized how much disease can impact not just the person but the whole family,” he says.

He was hooked by the idea of the startup once Zanforlin told him about the technology she had been working on.

“I thought it would be really great if I could be involved in helping people. I believed that I somewhat understood what people [experiencing cancer] were going through or what our company could help save them from” by enabling early intervention, Chudik says.

Chudik says he had always assumed that only doctors could help people with health problems. “I realize now that you can be an engineer; you could come up with good technology that would maybe help even more people than if you were a doctor.”

Now, through his experience with ConquerX, Chudik has become interested in the management and investing side of business. He thinks he might want to be a chief technology officer for other startups or become a venture capitalist and help fund small businesses.

Chudik spent this past summer working on his startup and gaining more experience — instead of doing an internship, he managed interns at his own startup. But he has used MIT’s Independent Activities Period (IAP) to acquire hands-on experience working for larger companies.

During the IAP of his sophomore year, he went to Singapore and was a research intern for a biomedical institute. And for his junior year, he worked as a data science intern in Geneva for Expedia.

“I must say, though, that classes and the startup have taken the majority of my time during college,” Chudik says.

Chudik’s commitment to his startup echoes the way he delved into dance when he was growing up.

His junior high and high school experiences were filled with ballroom dancing. He got swept into it when one of his friends needed a partner, and her entire family came to his house to ask him to join her.

He danced for seven years, which included five years of competitive dance. He became extremely dedicated to the art, training for 12-20 hours a week plus entire weekends at competitions. He would travel to different cities throughout Slovakia, spend hours doing his hair and makeup, and practicing the routine.

After a while, competitive dance started to take over his life and added a lot of stress and demand on his parents, so he stopped.

“I’m glad it’s over now,” he says. Chudik says that he now has more control over his life and has a better sleeping and eating schedule in college than ever before.

“During international student orientation, the sophomore and junior orientation leaders found out about my ballroom dance experience. They tried tricking me into joining and spent the whole week trying to recruit me, but no, it’s in the past now,” he says, with a laugh.

He spends his time focusing on his classes — from his major-related classes to electives like game design — and the MIT International Students Association.

He says the organization is currently not very active, but it has been a source of important friendships.

“Sometimes we would meet new people, but oftentimes we would just meet up with friends at the meetings that we haven’t seen for a long time,” Chudik says. “The international community is not so big here, so we kind of all know each other.”

When Chudik first moved to Boston, he didn’t know of anyone else from Slovakia — not even students from other universities. He says that when he studied in Slovakia, it was rare for people to apply to colleges in the United States. He had to slowly convince his family to let him study so far away. But once he got into MIT and received his financial assistance, his family was overjoyed.

Chudik grew up with a large extended family who would come over regularly for dinner. He knew he would be saying goodbye to that sense of community when he came to Boston. But Chudik received MIT’s Kate and Gordon B. Baty Scholarship, and the family responsible for the scholarship made him feel at home. The family hosts lunches two to three times a year and has a Thanksgiving dinner for all the students in the scholarship program.

“They’ve become my second family here. They’re like grandparents that I’ve never had,” he says. “They’re so great.”

Chudik has adjusted to Boston and has made this “very European-like” city his home. Because he found his way around an American university, he now mentors high school students in Slovakia and helps them navigate the college application process.