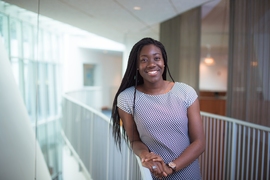 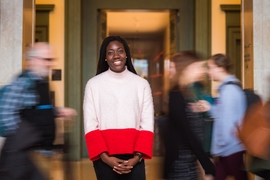 Caption:
“A lot of what has defined my time at MIT has been the different things that I’ve been able to get involved in,” says senior Adedoyin Olateru-Olagbegi.
Credits:
Image: Gretchen Ertl

For over 100 hours per semester, Adedoyin Olateru-Olagbegi can be found wearing a navy blue polo, black pants, boots, and a radio over her shoulder. She’s on the alert; if someone calls the emergency line, she’s ready to drive an ambulance to the scene.

Olateru-Olagbegi, an MIT senior, is a certified emergency medical technician. She is one of about 40 MIT community members to participate in the student-run Emergency Medical Services program, which she has been involved with since her first Independent Activities Period at MIT.

“I’ve always been a people person, and I think that has carried over to EMS,” she says. “My favorite part is being able to interact with different types of people. It’s a scary thing to ride in an ambulance, and I understand that I can be a friend to them in that moment.”

Olateru-Olagbegi is also a friend to the kids at Camp Kesem, a summer camp for children who have been affected by a parent’s cancer, where she has been a counselor and is now a co-director. In all of these roles, and during a formative trip to South Africa to learn about efforts to empower patients affected by HIV/AIDs, Olateru-Olagbegi has seen firsthand the importance of human interactions in caring for people experiencing medical crises. Ultimately, she hopes to use her formidable people skills as well as the analytical skills she has honed while majoring in computer science, economics, and data science, to work in global public health, helping to address inequities that lead to preventable deaths.

Ready at the sound of a siren

Olateru-Olagbegi is sitting in her Sigma Kappa sorority house when, in the middle of the interview, she hears ambulance sirens. She stops mid-sentence to look out the window.

“I always look outside to see if its our ambulance,” she laughs. “A lot of the hospitals are down the street, so a lot of the ambulances drive down here.”

When Olateru-Olagbegi is on EMS duty, she waits in the basement of the Stata Center with a group of fellow EMS-certified volunteers. When they get a call, they hurry to the truck and then drive to the location. MIT EMS responds to both on-campus calls and mutual-aid calls in Boston and Cambridge.

Olateru-Olagbegi is an EMS crew chief, which can mean that she’s either driving or in the back of the ambulance with the patient.

“I’ll be thinking big-picture about the call — about how quickly we need to be moving, about if we need to be calling anyone else for help, about making sure that everyone is doing the right thing. But ultimately, I ensure that the patient is safe and is getting to care as quickly as they need to,” she says.

She was also a HeartSafe Officer for MIT EMS during her first and second years at MIT. Project HeartSafe runs much of the CPR/First Aid training on MIT’s campus, including a free annual event called MassCPR, where students, faculty, and staff learn CPR and other life-saving skills. Olateru-Olagbegi and her HeartSafe colleagues have trained hundreds of MIT community members in CPR.

They have also conducted outreach to make CPR training more accessible, including partnering with independent living groups for trainings and conducting other trainings in public places on campus.

“I’m super proud of our initiative to use existing MIT infrastructure to make CPR training more accessible,” she says.

While Olateru-Olagbegi, who grew up in suburban Maryland, never went to a sleepaway summer camp, she has been volunteering for MIT’s chapter of Camp Kesem since her first year at MIT. The free camp gives over 200 children a fun week in a community of other campers who understand what they’re going through.

One way the children let loose is during “messy wars.” There’s shaving cream, mud-like substances, slime, and more. No one is spared.

“I often try to avoid getting messy, but it’s inevitable. Someone always finds me,” Olateru-Olagbegi laughs.

Her favorite part of each year, however, is seeing how shy new campers become comfortable and gain confidence as the week progresses.

“There’s just a really true desire to support and be supported. It’s a really special environment,” she says. “I think the camp environment is super special in that campers often feel at home so quickly, even if they’ve never been to camp before, and it really is a family in that sense.”

Olateru-Olagbegi has co-directed the program since last year, heading the volunteer committee, which recruits, supports, and trains 140 counselors throughout the year, and the teen committee, which runs Kesem for the teen campers. She devotes most of her free time to planning Camp Kesem and loves being able to create this experience for the campers.

Olateru-Olagbegi has also participated in a variety of other extracurricular activities at MIT, including serving as secretary of the Black Students’ Union and as a student representative on the MIT presidential advisory committee, among other things.

“A lot of what has defined my time at MIT has been the different things that I’ve been able to get involved in,” she says.

Her first year, she went to South Africa and learned about the HIV/AIDS crisis directly from the people being affected. She had never been to South Africa before, but she was instantly surrounded by a welcoming community and began creating new relationships. She and her classmates interacted with villagers, traditional healers, researchers, and HIV-positive women — some of whom were approximately her age.

“That was hugely impactful for me to experience as far as understanding how I, as someone who wants to work in public health, might work with those communities,” she says.

She decided to go to Colombia for her next IAP. The focus of this class was designing technologies with coffee farmers and directly engaging with the farmers throughout the whole process. The students did market research on coffee in Colombia, facilitated community conversations about the research and a future strategy, and taught the community members how to make and use a website to sell their products.

These two experiences solidified her desire to go into global public health, with a focus on removing barriers to equity. A career is a researcher in a laboratory has never had much appeal to Olateru-Olagbegi anyway; she would prefer to be out in the field, helping to affect change by working with people directly.

“As we think about system-wide change in health care, we must keep in mind the human aspect of it all,” she says.