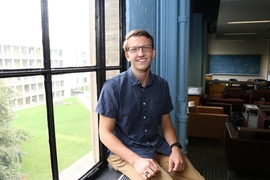 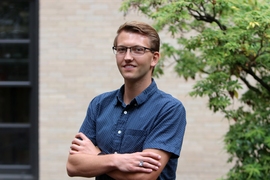 Vilhelm Lee Andersen Woltz, who goes by Billy, sits by the outdoor track at MIT on a New England fall day. It’s cold, gray, and misty, but it’s nothing compared to the weather during his most cherished personal cross country memory last year.

“The weather was terrible. It was pouring rain and with massive puddles. My heels were numb by the end of the race,” he recalls. The plan was to start out slow then speed up and obliterate the other team. Once Woltz came down a hill, he saw that the field to the finish line was one massive puddle.

“I couldn’t see the ground or any rocks and was so worried about falling,” he laughs. “I had put in all this work. Like, if I fall now, then first of all, I’d lose the race, so that would suck. But I would also just be cold.” But he plunged in and placed first.

Woltz, an MIT senior majoring in physics and in electrical engineering and computer science, is a distance runner for the Institute’s varsity track and cross country team. He dedicates at least 20 hours a week to the sport, and he can recall all of his meets in college.

Woltz takes an analytical approach to his running: “I think, ‘I want to win this race, what do I need to do to get there?’ It’s kind of like an open-ended problem and involves research and conducting my own experiments. I really like that kind of tinkering approach to my training,” he says.

Drawn to open-ended scientific questions as well, Woltz works in the lab of Professor William Oliver in the Research Laboratory of Electronics, on research to advance the cutting-edge field of quantum computing. In principle, ultrapowerful quantum computers could solve problems that are intractably complex for classical computers, but the field is still in very early stages.

When he took his first class on the subject, he was fascinated by the theory but skeptical about whether quantum computing could work on a large scale. But then he took Oliver’s graduate applied physics class, and that sucked him in.

“I was convinced,” he says. “I thought, okay, this might work. And I knew I wanted to work on it.”

Growing up in Logan, Ohio, a tiny town in the southeastern part of the state, Woltz always knew he wanted to do something related to science.

“My grandma was fond of reminding me that when she would ask me what I wanted to be when I was older, I’d say ‘a scientist.’ And she was like, ‘That’s not what little kids say. Why not a professional football player?’” he says.

Woltz, whose parents were both helicopter pilots in the U.S. Army, went to the same high school his father went to 30 years ago, which is the same school his grandmother went to 30 years before that. Logan is a football town — kids grow up dreaming of being professional football players, Woltz says. The town has a population of around 7,000, and about 25 percent of his graduating class went to college.

Woltz’s background has given him a clear-eyed view of what public education is like for many in America. He grew up on a 64-acre farm and before going to school, he would wake up early to go break the ice that had frozen over the horses’ drinking water during the night. He lived far from the town and only had limited options for internet — none of which had high-speed internet that could handle online gaming or even streaming movies.

Even though he now studies computer science, Woltz didn’t learn any computer programing before college. It wasn’t offered at his high school, so he asked a friend to show him the ropes when he came to MIT.

“Computer programming should be a basic skill for the American population. It’s so useful,” he says. “To not cover it at all, that seems outdated.”

Because he did not have the chance to learn programming in Logan, he wanted to create that opportunity for people in his hometown. After his sophomore year at MIT, Woltz decided to start a one-week summer camp for kids in Logan and the surrounding areas to learn how to program. His old high school gave him a classroom, and the first year 15 students joined the free program. By the end of the week, the students were able to program their own tic-tac-toe game using Python.

After that pilot year, the program grew. This past summer, he taught four courses with increasing difficulty levels. He also got in touch with Fugees Family, a nonprofit organization devoted to working with child survivors of war, and he taught 25 middle-school-age refugees from Syria, Bengal, and Bosnia, in Columbus, Ohio.

In total, Woltz taught close to 70 students and hopes to keep the program growing. He wants to teach the teachers computer programming so it can be sustainable and implemented across the school system.

After he graduates, he wants to get a PhD in Physics and continue working on quantum technologies. He’s currently in the process of obtaining a scuba diving license.

“I like going to places where humans don’t belong but where we build technology that lets us go there,” he says. “I’m just curious. I like to explore and figure out what is going on in the world around me, which is probably why I’m so interested in physics and science.”

How a declining environment affects populations