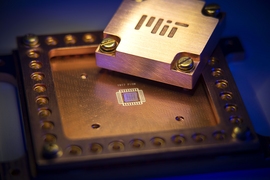 MIT and Dartmouth College researchers have demonstrated, for the first time, a tool that detects new characteristics of environmental “noise” that can destroy the fragile quantum state of qubits, the fundamental components of quantum computers. The advance may provide insights into microscopic noise mechanisms to help engineer new ways of protecting qubits.

Qubits can represent the two states corresponding to the classic binary bits, a 0 or 1. But, they can also maintain a “quantum superposition” of both states simultaneously, enabling quantum computers to solve complex problems that are practically impossible for classical computers.

But a qubit’s quantum “coherence” — meaning  its ability to maintain the superposition state — can fall apart due to noise coming from environment around the qubit. Noise can arise from control electronics, heat, or impurities in the qubit material itself, and can also cause serious computing errors that may be difficult to correct.

Researchers have developed statistics-based models to estimate the impact of unwanted noise sources surrounding qubits to create new ways to protect them, and to gain insights into the noise mechanisms themselves. But, those tools generally capture simplistic “Gaussian noise,” essentially the collection of random disruptions from a large number of sources. In short, it’s like white noise coming from the murmuring of a large crowd, where there’s no specific disruptive pattern that stands out, so the qubit isn’t particularly affected by any one particular source. In this type of model, the probability distribution of the noise would form a standard symmetrical bell curve, regardless of the statistical significance of individual contributors.

In a paper published today in the journal Nature Communications, the researchers describe a new tool that, for the first time, measures “non-Gaussian noise” affecting a qubit. This noise features distinctive patterns that generally stem from a few particularly strong noise sources.

The researchers designed techniques to separate that noise from the background Gaussian noise, and then used signal-processing techniques to reconstruct highly detailed information about those noise signals. Those reconstructions can help researchers build more realistic noise models, which may enable more robust methods to protect qubits from specific noise types. There is now a need for such tools, the researchers say: Qubits are being fabricated with fewer and fewer defects, which could increase the presence of non-Gaussian noise.

“It’s like being in a crowded room. If everyone speaks with the same volume, there is a lot of background noise, but I can still maintain my own conversation. However, if a few people are talking particularly loudly, I can’t help but lock on to their conversation. It can be very distracting,” says William Oliver, an associate professor of electrical engineering and computer science, professor of the practice of physics, MIT Lincoln Laboratory Fellow, and associate director of the Research Laboratory for Electronics (RLE). “For qubits with many defects, there is noise that decoheres, but we generally know how to handle that type of aggregate, usually Gaussian noise. However, as qubits improve and there are fewer defects, the individuals start to stand out, and the noise may no longer be simply of a Gaussian nature. We can find ways to handle that, too, but we first need to know the specific type of non-Gaussian noise and its statistics.”

“It is not common for theoretical physicists to be able to conceive of an idea and also find an experimental platform and experimental colleagues willing to invest in seeing it through,” says co-author Lorenza Viola, a professor of physics at Dartmouth. “It was great to be able to come to such an important result with the MIT team.”

For their work, the researchers leveraged the fact that superconducting qubits are good sensors for detecting their own noise. Specifically, they use a “flux” qubit, which consists of a superconducting loop that is capable of detecting a particular type of disruptive noise, called magnetic flux, from its surrounding environment.

In the experiments, they induced non-Gaussian “dephasing” noise by injecting engineered flux noise that disturbs the qubit and makes it lose coherence, which in turn is then used as a measuring tool. “Usually, we want to avoid decoherence, but in this case, how the qubit decoheres tells us something about the noise in its environment,” Oliver says.

Specifically, they shot 110 “pi-pulses” — which are used to flip the states of qubits — in specific sequences over tens of microseconds. Each pulse sequence effectively created a narrow frequency “filter” which masks out much of the noise, except in a particular band of frequency. By measuring the response of a qubit sensor to the bandpass-filtered noise, they extracted the noise power in that frequency band.

The key innovation behind the work is carefully engineering the pulses to act as specific filters that extract properties of the “bispectrum,” a two-dimension representation that gives information about distinctive time correlations of non-Gaussian noise.

Such protocols use information from the noise model to make implementations that are more efficient for practical quantum computers. But, because the details of noise aren’t yet well-understood, today’s error-correcting codes are designed with that standard bell curve in mind. With the researchers’ tool, programmers can either gauge how their code will work effectively in realistic scenarios or start to zero in on non-Gaussian noise.

Keeping with the crowded-room analogy, Oliver says: “If you know there’s only one loud person in the room, then you’ll design a code that effectively muffles that one person, rather than trying to address every possible scenario.”