The power of quantum computers depends on keeping them in a fragile quantum-mechanical state — which researchers have found a new way to extend.
Larry Hardesty, MIT News Office
Publication Date:
Press Inquiries 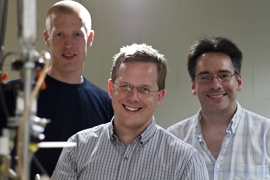 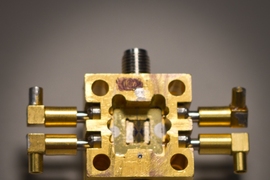 Caption:
A superconducting circuit (small square, center) fits snugly into a housing that enables it to receive electrical signals inside a cooling tank.
Credits:
Photo: Melanie Gonick
A quantum computer is a device — still largely theoretical — that could perform some types of calculations much more rapidly than classical computers. While a bit in a classical computer can represent either 0 or 1, a quantum bit, or qubit, can be in “superposition,” representing 0 and 1 at the same time. In experiments, however, keeping qubits in superposition long enough to do anything useful with them has proven very hard.

In a paper slated for the July issue of Nature Physics, researchers at MIT, MIT Lincoln Laboratory, Japan’s Institute of Physical and Chemical Research and NEC describe a new technique that extends the time a qubit can stay in superposition. Perhaps even more important, the same technique can be used to measure the physical characteristics of qubits that knock them out of superposition in the first place, paving the way to better qubit designs.

Researchers have sought to realize qubits in a variety of ways, from test tubes full of molecules sandwiched between powerful magnets to trapped ions manipulated by lasers. The MIT researchers and their colleagues instead used a superconducting circuit, made from several layers of aluminum deposited on a silicon wafer and cooled to just a fraction of a degree above absolute zero. Because of weird quantum effects, current flow through the circuit can be in superposition: The current is, in effect, flowing clockwise and counterclockwise at once.

Before this new paper, the previous published record for keeping a superconducting qubit  in superposition was less than 10 microseconds. By repeatedly zapping their qubit with microwave radiation, however, Jonas Bylander and Simon Gustavsson, both postdocs at MIT’s Research Laboratory of Electronics (RLE), and their colleagues were able to keep it alive for 23 microseconds. That may not sound like a very long time, but it’s much closer to the threshold qubits need to cross in order to perform useful computations.

“Just as people had done in the ’50s for computer science with conventional classical computation, people have developed what are called error-correcting codes that correct for the errors that occur in these qubits,” says William Oliver, the senior staff member at Lincoln Laboratory and visiting scientist at RLE who led the new study. “To make those error-correction codes feasible, the qubit has to have some minimum lifetime. You could think of the error-correcting code itself as some kind of processing that you need to do to ensure the operation is performed correctly.”

The main threat to the superposition of a qubit is the type of unwanted disturbance that electrical engineers call “noise.” It could be electrical noise from the cables used to program the qubit; it could be heat, or thermal noise (which cooling is intended to prevent); it could even be the electrical properties of impurities in the materials that constitute the qubit itself. By carefully controlling the rate at which they fire microwaves at the qubit, the researchers can filter out noise that occurs outside a narrow frequency band, preventing the qubit from falling out of superposition.

By changing the rate at which they fire the microwaves, however, Bylander, Gustavsson and their colleagues can also measure exactly how much noise the qubit experiences within any given frequency band. Knowing the frequency profile of the noise could help physicists identify its sources and determine how to mitigate it. The technique could also be applied to other types of qubits, not just those that use superconducting circuits.

One key to the system is carefully tailoring the shape of the microwave pulses so that firing them frequently won’t cause computational errors in the qubit. Compounding the problem is that the signal that controls the pulses has to travel to microwave emitters inside the refrigeration tank that helps cool the qubit. “You send some pulse down, [but] it might look different at the sample, because of imperfections in the wires,” Gustavsson says. Gustavsson found a way to “predistort” the signal so it would have the proper shape when it reached the qubit.

Not only do the microwave pulses extend the qubit’s lifetime, but in an actual quantum computer, they would also instruct the qubits in the execution of their error-correcting code. The complexity of that code would vary according to the algorithm that the quantum computer is running, but it would probably have somewhere around 10,000 separate instructions. In the Nature Physics paper, the researchers report hitting their qubit with 250 microwave pulses. They say, however, that since the experiments reported in the paper, they’ve refined their system so that they can get in about 1,000 pulses before their qubit falls out of superposition.

Yet Patrice Bertet, who researches superconducting quantum circuits for the French Atomic Energy Commission, says that using microwaves to extend the lifetime of a superconducting qubit is not the most interesting aspect of Bylander and his colleagues’ new paper. “It is an additional tool that has never been used before, and it’s a nice experiment, it’s a very good experiment,” Bertet says. But he points out that it is simply an extension of a technique that has been used successfully on other types of qubits. More intriguing, he says, is that “they are able to provide a rather detailed spectrum of the noise that the flux qubit sees.” “When the microscopic details [of noise] are a bit clearer, it might help fix it or fight it,” Bertet says. “It’s not yet clear how, but nevertheless, it’s good to know what enemy you fight.”