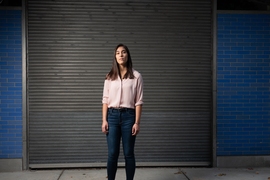 MIT’s Ray and Maria Stata Center (Building 32), known for its striking outward appearance, is also designed to foster collaboration among the people inside. Sitting in the famous building’s amphitheater on a brisk fall day, Kristy Carpenter smiles as she speaks enthusiastically about how interdisciplinary efforts between the fields of computer science and molecular biology are helping accelerate the process of drug discovery and design.

Carpenter, an MIT senior with a joint major in both subjects, said she didn’t want to specialize in only one or the other — it’s the intersection between both disciplines, and the application of that work to improving human health, that she finds compelling.

“For me, to be really fulfilled in my work as a scientist, I want to have some tangible impact,” she says.

Carpenter explains that artificial intelligence, which can help compute the combinations of compounds that would be better for a particular drug, can reduce trial-and-error time and ideally quicken the process of designing new medicines.

“I feel like helping make drugs in a more efficient manner, or coming up with some new medicine or way to tackle cancer or Alzheimer’s or something, would really make me feel fulfilled,” she says.

In the future, Carpenter hopes to get a PhD and pursue computational approaches to biomedicine, perhaps at one of the national laboratories or the National Institutes of Health. She also plans to continue advocating for diversity and inclusion in science, technology, engineering, and mathematics (STEM), throughout her career, drawing in part from her experiences as part of the leadership of the MIT chapter of the American Indian Science and Engineering Society (AISES) and the MIT Women’s Independent Living Group.

Finding her niche in STEM

Carpenter was first drawn to computer science and coding in middle school. She recalls becoming engrossed in a program called Scratch, spending hours in the computer lab playing with the block-based visual programming language, which, as it happens, was developed at MIT’s Media Lab.

As an MIT student, Carpenter found her way into the computational biology major after a summer internship at Lawrence Livermore National Lab, where researchers were using computer simulations and physics to look at a particular protein implicated in tumors.

Next, she got hooked on using computational biology for drug discovery and design during her sophomore year, as an intern at Massachusetts General Hospital. There, she learned that developing a new drug can be a very long, tedious, and complicated process that can take years, but that using machine learning and screening drugs virtually can help hasten this process. She followed that internship with an Undergraduate Research Opportunities Program (UROP) project in the lab of Professor Collin Stultz, within the MIT Research Laboratory of Electronics.

For Carpenter, who is part Japanese-American and part Alaskan Native and grew up outside of Seattle, the fact that there were Native American students at MIT, albeit just about a dozen of them, was an important factor in deciding where to attend college.

Soon after Carpenter was admitted, a senior from MIT’s AISES chapter called her and told her about the organization.

“They sort of recruited me before I even came here,” she recalls.

Carpenter is now the vice president of the chapter. The people in the organization, which Carpenter describes as a cultural group at MIT, have become her close friends.

“AISES has been a really important part of my time here,” Carpenter says. “At MIT, it’s mostly about having a community of Native students since it’s very easy for us to get isolated here. It’s hard to find people of a similar background, and so AISES is a place where we can all gather just to hang out, socialize, check in with each other.”

The organization also puts on movie screenings and other events to “show that we exist and that there are Native people at MIT because a lot of people forget that.”

Carpenter first became a member of the national AISES organization as a high school student, when she and her father made serious efforts to reconnect with their Alutiiq heritage. She began educating herself more about the history of Alaska Natives on Kodiak Island, and learning the Alutiiq language, which is severely endangered — just about a couple hundred people still speak it and even fewer speak it fluently.

Carpenter started to teach herself the language and then took an online class in high school through Kodiak College. She said she learned very basic amounts and knows simple sentences and personal introductions.

“I feel like learning the language was one of the best ways to connect to my culture and sort of legitimize myself in a way. Also, I knew it was important to keep the culture around,” she says. “I would always be telling my friends about it and trying to teach them what I was learning.”

Carpenter has also built her MIT community through the Women’s Independent Living Group, one of the few all-women housing options at the Institute. She joined the group of about 40 women the spring semester of her sophomore year.

“I really appreciate the group because there’s a lot of diversity in major and diversity in [graduation] year,” she says. “The living group is meant to be a strong community of women at MIT.”

Carpenter is now the president of the living group, which has been a significant source of support for her. When she was trying to increase her iron intake so she could donate blood, her friends in the living group helped cook meals and cheered her on.

Carpenter also hopes to rise in the ranks at the organizations where she ends up working after MIT, taking a leadership role in advocating for diversity, equity, and inclusion.

“I don’t want to lose sight of where I came from or my heritage or being a woman in STEM,” Carpenter says. “Wherever I end up working, I hopefully will move up and keep my Native and Asian identity visible, to be an example for others.”

Want to know what software-driven health care looks like? This class offers some clues.

Painting a fuller picture of how antibiotics act