Why too much DNA repair can injure tissue 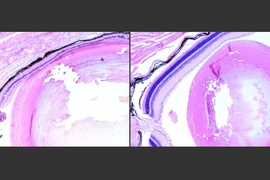 DNA-repair enzymes help cells survive damage to their genomes, which arises as a normal byproduct of cell activity and can also be caused by environmental toxins. However, in certain situations, DNA repair can become harmful to cells, provoking an inflammatory response that produces severe tissue damage.

MIT Professor Leona Samson has now determined that inflammation is a key component of the way this damage occurs in photoreceptor cells in the retinas of mice. About 10 years ago, she and her colleagues discovered that overactive initiation of DNA-repair systems can lead to retinal damage and blindness in mice. The key enzyme in this process, known as Aag glycosylase, can also cause harm in other tissues when it becomes hyperactive.

“It’s another case where despite the fact that inflammation is there to protect you, in some circumstances it can actually be harmful, when it’s overactive,” says Samson, a professor emerita of biology and biological engineering and the senior author of the study.

Aag glycosylase helps to repair DNA damage caused by a class of drugs known as alkylating agents, which are commonly used as chemotherapy drugs and are also found in pollutants such as tobacco smoke and fuel exhaust. Retinal damage from these drugs has not been seen in human patients, but alkylating agents may produce similar damage in other human tissues, Samson says. The new study, which reveals how Aag overactivity leads to cell death, suggest possible targets for drugs that could prevent such damage.

Mariacarmela Allocca, a former MIT postdoc, is the lead author of the study, which appears in the Feb. 12 issue of Science Signaling. MIT technical assistant Joshua Corrigan, former postdoc Aprotim Mazumder, and former technical assistant Kimberly Fake are also authors of the paper.

In a 2009 study, Samson and her colleagues found that a relatively low level of exposure to an alkylating agent led to very high rates of retinal damage in mice. Alkylating agents produce specific types of DNA damage, and Aag glycosylase normally initiates repair of such damage. However, in certain types of cells that have higher levels of Aag, such as mouse photoreceptors, the enzyme’s overactivity sets off a chain of events that eventually leads to cell death.

In the new study, the researchers wanted to find exactly out how this happens. They knew that Aag was overactive in the affected cells, but they didn’t know exactly how it was leading to cell death or what type of cell death was occurring. The researchers initially suspected it was apoptosis, a type of programmed cell death in which a dying cell is gradually broken down and absorbed by other cells.

However, they soon found evidence that another type of cell death called necrosis accounts for most of the damage. When Aag begins trying to repair the DNA damage caused by the alkylating agent, it cuts out so many damaged DNA bases that it hyperactivates an enzyme called PARP, which induces necrosis. During this type of cell death, cells break apart and spill out their contents, which alerts the immune system that something is wrong.

One of the proteins secreted by the dying cells, known as HMGB1, stimulates production of chemicals that attract immune cells called macrophages, which specifically penetrate the photoreceptor layer of the retina. These macrophages produce highly reactive oxygen species — molecules that create more damage and make the environment even more inflammatory. This in turn causes more DNA damage, which is  recognized by Aag.

“That makes the situation worse, because the Aag glycosylase will act on the lesions produced from the inflammation, so you get a vicious cycle, and the DNA repair drives more and more degeneration and necrosis in the photoreceptor layer,” Samson says.

None of this happens in mice that lack Aag or PARP, and it does not occur in other cells of the eye or in most other body tissues.

“It amazes me how segmented this is. The other cells in the retina are not affected at all, and they must experience the same amount of DNA damage. So, one possibility is maybe they don’t express Aag, while the  photoreceptor cells do,” Samson says.

“These molecular studies are exciting, as they have helped define the underlying pathophysiology associated with retinal damage,” says Ben Van Houten, a professor of pharmacology and chemical biology at the University of Pittsburgh, who was not involved in the study. “DNA repair is essential for the faithful inheritance of a cell’s genetic material. However, the very action of some DNA repair enzymes can result in the production of toxic intermediates that exacerbate exposures to genotoxic agents.”

The researchers also found that retinal inflammation and necrosis were more severe in male mice than in female mice. They suspect that estrogen, which can interfere with PARP activity, may help to suppress the pathway that leads to inflammation and cell death.

Samson’s lab has previously found that Aag activity can also exacerbate damage to the brain during a stroke, in mice. The same study revealed that Aag activity also worsens inflammation and tissue damage in the liver and kidney following oxygen deprivation. Aag-driven cell death has also been seen in the mouse cerebellum and some pancreatic and bone marrow cells.

The effects of Aag overactivity have been little studied in humans, but there is evidence that healthy individuals have widely varying levels of the enzyme, suggesting that it could have different effects in different people.

“Presumably there are some cell types in the human body that would respond the same way as the mouse photoreceptors,” Samson says. “They may just not be the same set of cells.”