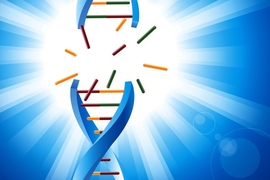 ↓ Download Image
Caption: When cells suffer DNA damage, there are several different pathways that can kick in to help repair it, depending on the type of damage. Cells from different people and different tumors vary greatly in their ability to repair DNA damage, and scientists have been pursuing measurements of this ability as a way to predict how patients will respond to DNA-damaging chemotherapy.

Caption:
When cells suffer DNA damage, there are several different pathways that can kick in to help repair it, depending on the type of damage. Cells from different people and different tumors vary greatly in their ability to repair DNA damage, and scientists have been pursuing measurements of this ability as a way to predict how patients will respond to DNA-damaging chemotherapy.

Many chemotherapy drugs work by damaging cancer cells’ DNA so severely that the cells are forced to commit cellular suicide. However, these drugs don’t work for all patients: If cells can repair the DNA damage, they may survive treatment.

MIT researchers have now developed a way to test cells’ ability to perform several different types of DNA repair, and to use that information to predict how tumors will respond to a particular drug.

In a paper published in the journal Cancer Research, the researchers successfully predicted how difficult-to-treat brain tumors would respond to the first-line chemotherapy drug used in such cases. They made these predictions by analyzing four different DNA repair pathways in human tumor samples grown in mice.

“Improving predictions is important because we want to get the right drug to the right patient. We also don’t want to treat people with a drug that’s not going to work. There are a lot of side effects and a lot of lost time where you could be using an alternative therapy,” says Zachary Nagel, a former MIT postdoc and the lead author of the study.

The paper’s senior author is Leona Samson, the Uncas and Helen Whitaker Professor in the MIT departments of Biological Engineering and Biology, and a member of the Koch Institute for Integrative Cancer Research. Other MIT authors include Doug Lauffenburger, head of the Department of Biological Engineering; Brian Joughin, a research scientist at the Koch Institute for Integrative Cancer Research; Isaac Chaim, a former graduate student; and Patrizia Mazzucato, a former technical assistant. Mayo Clinic researchers Jann Sarkaria, Gaspar Kitange, and Shiv Gupta are also authors.

When cells suffer DNA damage, there are several different pathways that can kick in to help repair it, depending on the type of damage. Cells from different people and different tumors vary greatly in their ability to repair DNA damage, and scientists have been pursuing measurements of this ability as a way to predict how patients will respond to DNA-damaging chemotherapy.

In 2014, Samson, Nagel, and colleagues devised a new technique that allows them to rapidly measure four different DNA repair pathways at once. Using this method, they analyzed 24 genetically unique cultures of lymphoblastoid cells, a type of blood cell, taken from healthy people. Their measurements revealed a huge range of variability: In one repair system, some people’s cells were 10 times more efficient than others.

Next, the researchers wanted to determine if these measurements could help to predict how individual glioblastoma tumors would respond to treatment with temozolomide, which is usually the first drug given to glioblastoma patients, along with radiation treatment. However, temozolomide doesn’t work for all patients, and resistance often develops in those for whom it initially works.

Part of the reason why the researchers chose this type of cancer is that doctors currently use a test of one type of DNA repair, known as MGMT, to predict response to temozolomide. However, this test is not always accurate, so the MIT team set out to see if analyzing a larger number of repair pathways would generate better predictions.

Based on the DNA repair data from the lymphoblastoid cells, plus information on how temozolomide treatment affects the cells’ survival, Lauffenburger and Joughin worked with Nagel to devise a mathematical model that correlates cells’ DNA repair ability with their sensitivity to the drug.

The researchers then measured DNA repair capacity in 12 different glioblastoma tumor samples, including some that had not been previously exposed to temozolomide and some that had been treated and acquired resistance. Plugging this data into their model generated predictions for how each cell type would respond to the drug.

The Mayo Clinic researchers, led by Sarkaria, implanted these human tumor cells into mice and then tracked how they responded to temozolomide treatment. The MIT team could then compare the model’s predictions with the outcomes in mice. They found a much better correlation between the outcomes and predictions based on all four repair pathways, compared to predictions that used only MGMT data.

“Measuring the capacity of these pathways just gives us a much stronger prediction,” Samson says.

Ben Van Houten, a professor of pharmacology and chemical biology at the University of Pittsburgh, says he believes this approach could have a profound impact on cancer treatment.

"I think that this is the most exciting paper to come out of the DNA repair community in some time, because it raises the possibility of screening patients before treatment," says Van Houten, who was not involved in the research.

Before this strategy could be used to guide patient treatment, more studies must be done in human tumor samples to see if the same correlation exists, the researchers say.

The researchers believe that adding more DNA repair pathways into their model could help make their predictions even more accurate. They also plan to apply this approach to other drugs and other types of cancer.

“Because DNA repair is a fundamental process in cells, we don’t think this should be restricted to glioblastoma,” says Nagel, who is now an assistant professor at the Harvard T.H. Chan School of Public Health. “We think this is generalizable to other tissues and to other agents.