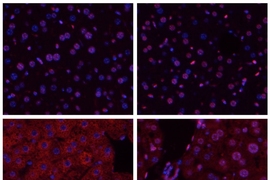 When tissues are deprived of blood, as happens during a stroke or heart attack, the lack of oxygen can cause serious damage. After blood flow is restored, further damage occurs as the tissues become inflamed. This process, known as ischemia/reperfusion, also occurs during organ transplantation, and can induce widespread cell death.

A new study from MIT biological engineers shows that surprisingly, a DNA-repair enzyme called Aag actually makes this damage worse. Mice lacking this enzyme show much less tissue damage from ischemia/reperfusion than normal mice, suggesting that blocking this enzyme could be beneficial for patients who have strokes, heart attacks, or organ transplants.

“The exciting thing about this finding is that it is relevant to so many different diseases and conditions,” says Leona Samson, the Uncas and Helen Whitaker Professor in the departments of Biological Engineering and Biology, and a member of MIT’s Center for Environmental Health Sciences and Koch Institute for Integrative Cancer Research.

Samson is the senior author of a paper describing the findings in this week’s issue of the Proceedings of the National Academy of Sciences. The paper’s lead author is Mohammad Ebrahimkhani, a research scientist in MIT’s Department of Biological Engineering.

The two faces of Aag

Samson’s lab has studied Aag for several years, and previously found that it protects the colon from developing cancerous lesions following inflammation like that produced by Crohn’s disease and ulcerative colitis. She expected Aag would offer similar protection in other inflammatory environments, but unexpectedly found the opposite: In the liver, kidney, and brain, normal mice undergo much more tissue damage following ischemia/reperfusion than mice in which the Aag gene has been knocked out.

Ischemia/reperfusion sets off a complex chain of events that eventually leads to tissue death. When blood rushes into the tissues following oxygen deprivation, cells send out distress signals that set off an inflammatory response. This inflammation produces harmful molecules known as reactive oxygen and nitrogen species, which damage cells’ DNA.

“It’s a vicious cycle,” Samson says. “You have the DNA damage which damages the cell, then the cell secretes danger signals that bring in more immune cells and more inflammation, which produces more damage.”

This DNA damage activates Aag, which cuts out the damaged DNA bases, ultimately causing DNA strand breaks. This leads to hyperactivation of another enzyme called PARP, which ends up depleting the cells’ supply of energy-storing molecules called ATP and NAD. Without those molecules, the cells’ metabolic systems break down and they die.

The novelty of the study comes from the finding that not all tissues respond the same way to stress, says Robert Sobol, a professor of oncologic sciences at the University of South Alabama’s Mitchell Cancer Institute.

“Such studies can help answer some pivotal questions in biology, such as, ‘Why do some cancers or diseases affect only one organ and not all?’ The work in this paper, especially when put in context to previous findings, clearly shows that different organs respond in very different ways to the same stress,” says Sobol, who was not part of the research team.

Aag is one of several enzymes called glycosylases that are involved in DNA repair, but it appears to be the only one that has this two-faced personality.

“There’s something quite unique about this particular glycosylase, and we believe it’s because it’s acting on so many different substrates. Inflammation produces a panoply of damaged bases, and so when Aag is present it just overwhelms the system, whereas the other glycosylases are acting on a narrow range of damaged bases,” Samson says.

The findings suggest that inhibiting Aag could provide a good way to treat patients who have just had a stroke or heart attack, or who are about to undergo an organ transplant. Currently, drugs that inhibit PARP are in clinical trials for that same purpose. However, Samson believes it could be beneficial to try to turn off the damaging cascade before PARP even shows up, by turning off Aag.

In future studies, the researchers hope to study whether Aag has the same effect in heart tissue following a heart attack. They are also trying to figure out in greater detail the mechanism of how the tissue damage occurs. “By understanding the mechanism at every level, I think one has a better chance of being able to target as many levels as possible to prevent the tissue damage,” Samson says.

The research was funded by the National Institutes of Health, the Ellison Medical Foundation, and the Heitman Foundation. The brain ischemia/reperfusion experiments were done in collaboration with Cenk Ayata’s lab at Massachusetts General Hospital.