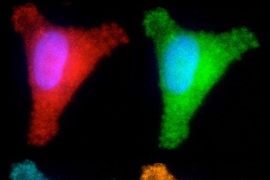 ↓ Download Image
Caption: MIT biological engineers have developed a way to test several different DNA repair pathways in one cell. In each of these images, the cell is producing a different colored fluorescent protein, indicating whether it has successfully repaired one of four different types of DNA damage.
Credits: Image: Aprotim Mazumder

Caption:
MIT biological engineers have developed a way to test several different DNA repair pathways in one cell. In each of these images, the cell is producing a different colored fluorescent protein, indicating whether it has successfully repaired one of four different types of DNA damage.
Credits:
Image: Aprotim Mazumder

Our DNA is under constant attack from many sources, including environmental pollutants, ultraviolet light, and radiation. Fortunately, cells have several major DNA repair systems that can fix this damage, which may lead to cancer and other diseases if not mended.

The effectiveness of these repair systems varies greatly from person to person; scientists believe that this variability may explain why some people get cancer while others exposed to similar DNA-damaging agents do not. A team of MIT researchers has now developed a test that can rapidly assess several of these repair systems, which could help determine individuals’ risk of developing cancer and help doctors predict how a given patient will respond to chemotherapy drugs.

The new test, described in the Proceedings of the National Academy of Sciences the week of April 21, can analyze four types of DNA repair capacity simultaneously, in less than 24 hours. Previous tests have been able to evaluate only one system at a time.

“All of the repair pathways work differently, and the existing technology to measure each of those pathways is very different for each one. It takes expertise, it’s time-consuming, and it’s labor-intensive,” says Zachary Nagel, an MIT postdoc and lead author of the PNAS paper. “What we wanted to do was come up with one way of measuring all DNA repair pathways at the same time so you have a single readout that’s easy to measure.”

The research team, led by professor Leona Samson, used this approach to measure DNA repair in a type of immortalized human blood cells called lymphoblastoid cells, taken from 24 healthy people. They found a huge range of variability, especially in one repair system where some people’s cells were more than 10 times more efficient than others.

“None of the cells came out looking the same. They each have their own spectrum of what they can repair well and what they don’t repair well. It’s like a fingerprint for each person,” says Samson, who is the Uncas and Helen Whitaker Professor, an American Cancer Society Professor, and a member of MIT’s departments of biological engineering and of biology, Center for Environmental Health Sciences, and Koch Institute for Integrative Cancer Research.

With the new test, the MIT team can measure how well cells repair the most common DNA lesions, including single-strand breaks, double-strand breaks, mismatches, and the introduction of alkyl groups caused by pollutants such as fuel exhaust and tobacco smoke.

To achieve this, the researchers created five different circular pieces of DNA, four of which carry a specific type of DNA damage, also called DNA lesions. Each of these circular DNA strands, or plasmids, also carries a gene for a different colored fluorescent protein. In some cases, the DNA lesions prevent those genes from being expressed, so when the DNA is successfully repaired, the cell begins to produce the fluorescent protein. In others, repairing the DNA lesion turns the fluorescent gene off.

By introducing these plasmids into cells and reading the fluorescent output, scientists can determine how efficiently each kind of lesion has been repaired. In theory, more than five plasmids could go into each cell, but the researchers limited each experiment to five reporter plasmids to avoid potential overlap among colors. To overcome that limitation, the researchers are also developing an alternative tactic that involves sequencing the messenger RNA produced by cells when they copy the plasmid genes, instead of measuring fluorescence.

In this paper, the researchers tested the sequencing approach with just one type of DNA repair, but it could allow for unlimited tests at one time, and the researchers could customize the target DNA sequence to reveal information about which type of lesion the plasmid carries, as well as information about which patient’s cells are being tested. This would provide the ability for many different patient samples to be tested in the same batch, making the test more cost-effective.

Previous studies have found that many different types of DNA repair capacity can vary greatly among apparently healthy individuals. Some of these differences have been linked with cancer vulnerability; for example, a genetic defect in a type of DNA repair called nucleotide excision repair often leads to a condition called xeroderma pigmentosum, in which DNA damage caused by ultraviolet light goes unrepaired and leads to skin cancer.

Scientists have also identified links between DNA repair and neurological, developmental, and immunological disorders, but useful predictive DNA-repair-based tests have not been developed, largely because it has been impossible to rapidly analyze several different types of DNA repair capacity at once.

Samson’s lab is now working on adapting the new test so it can be used with blood samples taken from patients, allowing researchers to identify people who are at higher risk and potentially enabling prevention or earlier diagnosis of diseases linked to DNA repair. Such a test could also be used to predict patients’ response to chemotherapy drugs, which often work by damaging cancer cells’ DNA, or to determine how much radiation treatment a patient can tolerate.

The researchers also believe this test could be exploited to screen for new drugs that inhibit or enhance DNA repair. Inhibitors could be targeted to tumors to make them more susceptible to chemotherapy, while enhancers could help protect people who have been accidentally exposed to DNA-damaging agents, such as radiation.

Another important application for this test could be studying fundamental biological processes such as how cells recruit backup repair systems to fill in when another pathway is overwhelmed, says Samuel Wilson, a principal investigator at the National Institute of Environmental Health Sciences (NIEHS), part of the National Institutes of Health (NIH).

“There’s an opportunity to use these multiplexed plasmids in biological assays where several repair pathways can be probed at the same time, offering a very advanced tool to allow us to make much better interpretations about the repair status of a cell,” says Wilson, who was not part of the research team.