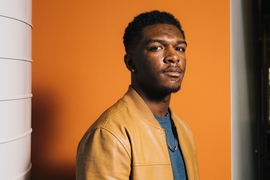 Stephon Henry-Rerrie grew up in Brooklyn as the oldest of five siblings. He loved math puzzles from a young age and chose a premed track in his specialized high school. He never thought he’d study at MIT, but after being accepted to MIT’s Weekend Immersion in Science and Engineering (WISE), a program for high school seniors from underrepresented communities to learn about the MIT experience, he changed his mind.

Before visiting MIT, “I could never see myself here, because it was just this ivory-tower looking place,” he says. “Whereas when I was here, and I was talking with people, I was like, ‘Oh, wow I can hang.’ Maybe I do belong here.”

Henry-Rerrie, now a senior, has discovered many passions during his time at the Institute. He realized early on that he didn’t want to pursue medicine, and chose to major in chemical engineering. Then, after realizing how versatile physics could be, he picked that up as a second major. In four years, he has helped create particle simulations, worked on a trading floor, conducted research in the chemical engineering industry, and mentored younger MIT students. He would never have predicted ending up where he is now — but he wouldn’t trade it.

“I have a very weird, nonlinear trajectory that I’ve taken,” he says. “But along the way I’ve learned lots of things about myself and about the world.”

In the market for growth

When Henry-Rerrie accepted an internship at Morgan Stanley the summer after his first year, he had no idea that he’d be working on the trading floor. Some similarities to the movie “Wall Street” were uncanny, he says — he was surrounded by bond traders, and his mentor underwrote municipal bonds. He says the experience of working in finance fundamentally changed his life. Not only did he learn to speak up among many powerful voices, he also realized that science and engineering are directly tied into economics. Research doesn’t happen in a vacuum — when scientists make discoveries, that impacts the economy.

“I think I needed that exposure,” he says. “Because if I hadn’t, I feel like I wouldn’t have the perspective that I have now on, what does this all mean? What is going on? What’s this larger system that we exist in?”

He really enjoyed working within the financial sector. And, after meeting a number of former physicists (and chemical engineers) now working in financial roles at Morgan Stanley, he realized that studying physics rather than economics wouldn’t hurt his chances of getting a job in finance — so he took on a double major and was thrilled to study another area he’s always been fascinated by.

In his sophomore year, he worked in the lab of Assistant Professor James Swan, creating particle simulations with PhD student Zachary Sherman. The pair looked at how varying two different kinds of interactions between nanoparticles in solution affected those nanoparticles. Henry-Rerrie likens it to having a bunch of people (representing the particles) in a room where temperature and wind are controlled by two knobs. As you turn up the temperature knob, or the wind knob, or both knobs in varying amounts, the people will react.

“What will those people be feeling? What will they do? ... I can turn those knobs and record, what did those people do at each specific value? And then after that, can we see a trend in how people will react?”

The following summer, Henry-Rerrie took an internship at chemical engineering company Praxair. The people there were great, he says, but as he considered his options for the future, he found his heart was with financial markets. The following summer, he took a job at investment management company BlackRock.

“I also found that finance touches everything, everybody’s life, in a very real way that you can’t get away from, at least now,” he says.

For him, BlackRock was the perfect compromise between chemical engineering and finance. As much of his role involved risk and quantitative analysis, he was able to practice many of the techniques he learned in engineering, as well as do real work in the finance sector.

“At my internship at BlackRock, I was able to apply everything that I learned,” he says. “Not necessarily the technical stuff, but the way of problem solving, of thinking.”

When Henry-Rerrie was first visiting MIT, he was introduced to a living group called Chocolate City, in New House. The group consisted of black and Latino men supporting each other socially, academically, and professionally.

“When I saw that, that was the signal to me that MIT is just a special place,” he says.

He was accepted to live in Chocolate City his first year and has been there ever since. He has served in a variety of roles, including athletics chair, social chair, co-chair, and now resident peer mentor. He describes himself as the big brother of the house, working to get people to socialize and bond with each other. Living in the group has had its challenges, as its members come from diverse backgrounds and often have conflicting opinions. But that’s all part of the learning experience that makes it so valuable, he says.

“Being in that ecosystem has, I think, developed me into the person I am now, and helped me to feel like I can take on, I can take on anything after I graduate here.”

Henry-Rerrie loves being part of Chocolate City, and is grateful for how much it has developed him as a person. That’s why he’s chosen to give back to the other residents this year as the resident peer mentor, and why he plans to continue to help out as an alumnus. To him, Chocolate City is much more than a place to sleep and study.

Henry-Rerrie is grateful for the context that his humanities, arts, and social sciences (HASS) classes have given him in his scientific pursuits. He recalls one class, STS.042 / 8.225 (Physics in the Twentieth Century), that introduced him to an entire world of physics history. He learned everything from the politics underlying physics to the fact that Erwin Schrödinger himself was skeptical of quantum theory — he only made the cat analogy to show how crazy it was.

“A lot of ways that we evaluate people and what they’ve done can be super muddled if we don’t understand the history of how things came about,” he says.

It’s that kind of learning, bridging concepts that he never assumed were related, that Henry-Rerrie really enjoys. The applications to engineering and broader society are what drew him to finance; his research and economic work at BlackRock was so fulfilling that he’s accepted an offer to return after graduation full-time.

Longer term, Henry-Rerrie isn’t sure where exactly he’ll end up. He’s considering business school in his five-year plan and would love to end up back at MIT for that. His broader goal, at least right now, is to figure out where his skills can be put to the greatest use.

“I’m all about finding connections. Between, I guess, very weird things. Things that don’t seem that related,” he says.

From vision to action

Taking the world by storm