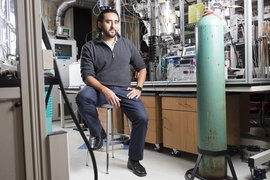 ↓ Download Image
Caption: “To me, the most rewarding aspect of my profession is to work with these extremely talented and bright students,” Roman says.

Caption:
“To me, the most rewarding aspect of my profession is to work with these extremely talented and bright students,” Roman says.

A couple of years into graduate school, Yuriy Roman had what he calls a “tipping point” in his career. He realized that all of the classes he had taken were leading him toward a deep understanding of the concepts he needed to design his own solutions to chemical problems.

“All the classes I had taken suddenly came together, and that’s when I started understanding why I needed to know something about thermodynamics, kinetics, and transport. All of these concepts that I had seen as more theoretical things in my classes, I could now see being applied together to solve a problem. That really was what changed everything for me,” he says.

As a newly tenured faculty member in MIT’s Department of Chemical Engineering, Roman now tries to guide his students toward their own tipping points.

“It’s amazing to see it happen with my students,” says Roman, noting that working with students is one of his favorite things about being an MIT professor. His students also make major contributions to his lab’s mission: coming up with new catalysts to produce fuels, plastics, and other useful substances in a more efficient, sustainable manner.

“To me, the most rewarding aspect of my profession is to work with these extremely talented and bright students,” Roman says. “They really are great at coming up with outside-of-the-box concepts, and I love that. I think MIT’s biggest asset is precisely that, the students. To me it’s a pleasure to work with them and learn from them as well, and hopefully have the opportunity to teach them some of the things that I know.”

Roman, who grew up in Mexico City, loved chemistry from a young age. “I just liked to play with things like soap and bleach, which maybe wasn’t the safest thing,” he recalls. Another favorite activity was juicing cabbages to produce a pH indicator. (Red cabbage contains a chemical called anthocyanin that changes color when exposed to acidic or basic environments.)

Roman’s mother was originally from Belarus, and with his multicultural background he developed a strong interest in learning about other cultures and visiting other countries. He won a full scholarship to Monterrey Institute of Technology and Higher Education, in Mexico, for high school and college, but during his first year of college, he became interested in going abroad to finish his degree.

A friend who was then an undergraduate at MIT encouraged Roman to apply to schools in the United States, and he ended up transferring to the University of Pennsylvania.

“My parents were very surprised. In Mexico, it is common to live with your parents long after finishing college. The concept of leaving for college is almost nonexistent,” Roman says.

Roman decided to study chemical engineering, allowing him to combine his love for chemical reactions and his desire to follow in the footsteps of a brother who was an engineer. After graduating, he planned to look for a job in the chemical industry, but his then-girlfriend, now his wife, was planning to begin medical school. She suggested that he go to graduate school with her, so they both ended up attending the University of Wisconsin at Madison.

There, Roman studied with James Dumesic, a chemistry professor who works on biofuels. For his PhD thesis, Roman devised a process to generate a chemical called hydroxymethylfurfural (HMF) from sugars derived from biomass. HMF is a “platform chemical” that can be converted into many different end products, including fuels.

After finishing graduate school, Roman thought he would go to work for a chemical company, but at Dumesic’s suggestion he decided to go into academia instead.

“When I started interviewing at different universities, I realized that as a professor, you can have a lot of freedom to explore ideas and tackle problems long-term, and you can still have a lot of contact with industry,” he says. “You have more control over your time and where you spend it, in terms of investing effort toward basic science.”

Out of graduate school, he got a job offer at MIT but first spent two years doing a postdoc at Caltech, while his wife did her residency at the University of California at Los Angeles. Working with Mark Davis, a professor of chemical engineering, Roman began studying materials called zeolites, which have pores the same size as many common molecules. Confining molecules in these pores allows for certain chemical reactions to occur much faster than they otherwise would, Roman says.

Davis also instilled in Roman the importance of designing his own catalysts rather than relying on those developed by others, which allows for more control over chemical reactions and the resulting materials. While many research groups focus either on designing catalysts or on using existing catalysts to come up with novel ways to synthesize materials, Roman believes it is critical to work on both.

“When you are in control of synthesizing your own catalysts, you can do much more systematic studies. You have the ability to manipulate things at will,” he says. “It’s working at this juncture of synthesis and catalysis that is the key to discovering new chemistry.”

After arriving at MIT in 2010, Roman launched his lab with a focus on designing catalysts that can generate new and interesting materials. One key area of research is the conversion of biomass components, such as lignin, into fuels and chemicals. One of the biggest challenges in this type of synthesis is to selectively remove oxygen atoms from these molecules, which usually have many more oxygen atoms than fuels do.

During a brainstorming session, Roman and his students came up with the idea of using a metal oxide catalyst in which some oxygen atoms were removed from the surface, creating small pockets known as “vacancies.” Oxygenated molecules can be precisely anchored in those vacancies, allowing their carbon-oxygen bonds to be easily broken so the oxygen can be replaced with hydrogen.

In another project, Roman’s lab developed a more sustainable alternative to catalysts made from precious metals such as platinum and palladium. These metals are used in many renewable-energy technologies, including fuel cells and lithium-air batteries, but they are among the Earth’s scarcest metals.

“If we were to go from our current fleet of vehicles with internal combustion engines to a fuel cell fleet, there’s not enough platinum in the world to sustain that amount,” Roman says. “You need to use Earth-abundant materials because there simply aren’t enough of these other precious materials to do it.”

In 2014, Roman and his students showed that they could create powerful catalysts from compounds called metal carbides, made from plentiful metals such as tungsten, coated with just a thin layer of a rare metal such as platinum.

Developing and promoting this kind of sustainable technology is one of Roman’s biggest research priorities.

“It’s a tremendous battle because the energy sector is just so large. The scale is so big and the infrastructure that’s already in place for petroleum-based fuel is so extensive. But it’s important for us to develop technologies for renewable resources and really curb our emissions of greenhouse gases,” he says. “Big, hard problems. That’s what we’re going after.”