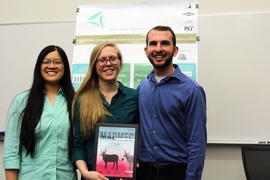 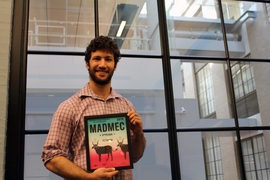 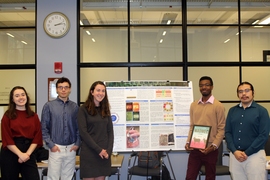 A team with a sustainable alternative to nondegradable plastic earned first place in this year’s MADMEC competition on Oct. 15.

The ecoTrio team, made up of three MIT PhD students, took home the $10,000 grand prize in the annual materials science program for its biodgradable blends that imitate various plastics. The second-place prize was awarded to PETTIGREW, which integrated live bacteria into plastic production to improve plastic degradability. RadioStar, which created a low-cost sensor for farmers, came in third.

“There seem to be natural themes from year to year,” Michael Tarkanian, a senior lecturer in the Department of Materials Science and Engineering (DMSE) who runs MADMEC, told MIT News. “There were a bunch of plastic postconsumer recycling projects this year, two of which made it to the finals. I think plastics are getting a lot of press lately, with trash piles building up in the oceans and sea animals being injured. Maybe that influenced the students.”

The oral and poster presentations were the culmination of team projects that began last spring and included a series of design challenges throughout the summer. Each team received guidance, access to equipment, and up to $1,000 in funding to build and test their prototypes.

The teams were judged based on what they accomplished during their journey from idea to prototype. For ecoTrio, that meant creating a material that fit its cost, mechanical, and sustainability goals.

“These ideas start from scratch, and the goal is to test their feasibility and develop hardware, so by the time the program is over, students know whether or not they will work,” Tarkanian said.

An alternative to nondegradable plastic

At the core of ecoTrio’s product are three materials, two of which the company considers proprietary. The first is a polymer that is easily biodegradable but difficult to process and too expensive to compete with plastics on its own. The second material is a biodegradable plastic polymer that’s cheap and makes the blend easier to process at scale using industrial equipment. The third component consists of fine-grained wood particles that the team uses to further lower the cost of the mix and tune the final product for different uses.

“Our goal was to create an alternative plastic material that comes exclusively from renewable resources, has the same properties as existing plastics used today, and at the end of its life, biodegrades regardless of where it ends up,” ecoTrio team member Ty Christoff-Tempesta said.

Members of the team, which also includes Margaret Lee and Sara Sheffels, say their blend has a similar cost and melting point as traditional plastics, while its strength and flexibility can be adjusted based on the percentage of added wood particles.

To demonstrate the range of plastics their product could replace, the team showed off samples including a hard spoon as well as flexible, bag-like materials.

“Today, we all recognize single-use plastics as an environmental crisis, but as consumers we come into contact with them all the time, whether it’s packaging for food, cosmetic products, or household products,” Christoff-Tempesta said. “The reason we see them all the time is because they’re so cheap and convenient.”

During ecoTrio’s presentation, team members also noted that there is increasing pressure on companies from consumers and the government to use more sustainable packaging.

The second-place team, PETTIGREW, took a different approach to the plastic waste problem. Various methods have been used to quicken the decomposition of plastics after they’re used and collected. Unfortunately, the vast majority of plastics aren’t collected for recycling at all.

“Some of these plastics take 1,000 years to degrade on their own, which can have consequences including plastic island formation in the ocean,” said PETTIGREW team member Leonardo Zornberg, a PhD candidate.

With these problems in mind, PETTIGREW decided to incorporate decomposition-causing bacteria into plastics as they’re being produced. When the bacteria they selected, Bacillus subtilis, is combined with a sugar filler, it can survive the high temperatures used to shape many plastics.

The team also found the addition of the bacteria had only a minimal effect on the strength and flexibility of the plastics in some cases.

Zornberg acknowledged the potential for pushback from people hesitant to use plastics with living bacteria inside of them, but he noted the bacterial strain his team selected is frequently used to make probiotics for humans, livestock, and agricultural supplements.

Going forward, the team believes genetically engineering the bacteria could further enhance its degradation capabilities, and could even give it other abilities like self-cleaning and antimicrobial defenses.

“One of the reasons we chose Bacillus is it’s a model organism,” Zornberg told MIT News. “It’s very well-understood how to genetically engineer and modify its strains, and it’s used in industrial-scale enzyme production, so both of these things suggest it would be suitable if we wanted to modify the bacteria for future applications.”

RadioStar broke from this year’s plastic trend by creating a low-cost sensor for small-scale farmers. The sensor makes use of retroreflectors, which are cube-shaped structures that send directional light back toward its source efficiently from a variety of angles.

The team’s product consists of small retroreflectors made of gels that can be dispersed across farmland. The biodegradable gels can be made to change colors and optical properties in response to different chemical stimuli. Those changes can then be observed using a directional light emitter and detector, which could be special flashlight held by a farmer or drones equipped with cameras.

RadioStar’s prototype was made to change color in response to varying PH levels, but the team believes its sensors could be tuned to monitor a variety of soil conditions.

“This is just a proof of concept for how this can be used to test PH, but we can extrapolate this to test a bunch of different parameters,” said RadioStar team member Sara Wilson, an undergraduate in DMSE. “For example, nitrogen, water content, and phosphorous are very important for different types of crop growth.”

Overall, Tarkanian thinks this year’s program was a success not just because of the potential of the projects, but also because of the amount of learning-by-doing that led to the final presentations.

“The high-level goals [of MADMEC] are to give students the chance to make something tangible and to take the classroom knowledge they’ve been acquiring and put it into practice,” Tarkanian said.

Zornberg thinks the MADMEC program, which focuses on earlier-stage venture creation compared to other entrepreneurial programs on campus, helps materials science students think through the process of successful innovation.

“Having the opportunity to explore prototyping separated from the business plan is really a good way to engage engineering students in thinking about product design,” Zornberg said.

MADMEC is hosted by DMSE and sponsored by Saint Gobain and the Dow Chemical Company.