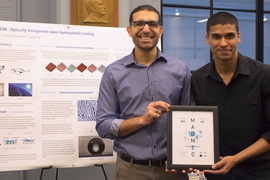 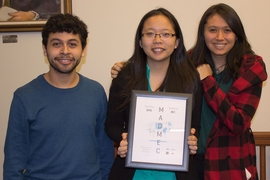 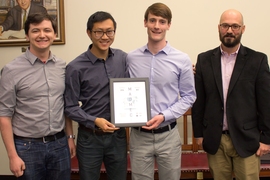 ↓ Download Image
Caption: A third-place prize of $5,000 went to HydroGlass, a team of PhD students that developed a hydrogel that can be used to manufacture self-shading windows. Pictured (from left) are HydroGlass team members Seth Cazzell, Jonathan Hwang, and Jerome Michon, along with Michael Tarkanian, a lecturer in DMSE who runs MADMEC.
Credits: Photo: Tara Fadenrecht 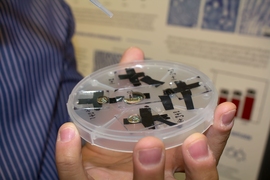 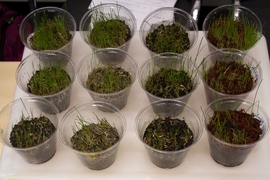 Caption:
A third-place prize of $5,000 went to HydroGlass, a team of PhD students that developed a hydrogel that can be used to manufacture self-shading windows. Pictured (from left) are HydroGlass team members Seth Cazzell, Jonathan Hwang, and Jerome Michon, along with Michael Tarkanian, a lecturer in DMSE who runs MADMEC.
Credits:
Photo: Tara Fadenrecht

Caption:
The Soil Network team had samples of their soil treatment. The more lush samples, at far left, are treated with the team's custom mixture.
Credits:
Photo: Tara Fadenrecht

The winning team at this year’s MADMEC competition, PolyClean, aims to keep the roads safer with a transparent, water-shedding windshield coating that lets drivers see clearly, even in a downpour.

“Whether you like driving or not, I don’t think any of us like driving in these conditions,” said team member and PhD student Karim Gadelrab, referencing a video of a car’s windshield heavily obscured by rain, which was part of the team’s winning presentation.

For its invention, the PolyClean team — which includes PhD student Mukarram Tahir — won the $10,000 grand prize at yesterday’s competition, hosted annually by the Department of Materials Science and Engineering (DMSE) and sponsored by Saint-Gobain and Dow Chemical. Another team won a $6,000 second-place prize for inventing a novel soil treatment to fight erosion and retain nutrients, and a third-place team took home $4,000 for developing a hydrogel that can be used to manufacture self-shading windows.

For the contest, five MIT student teams delivered oral and poster presentations explaining the inventions they’d built over the summer to solve energy, transportation, and sustainability issues. Starting in June, MADMEC hosts several events that walk competing teams through development milestones, such as feasibility studies and refining prototypes. All teams (usually around 10) receive $1,000 to prototype, and the winners of three minicontests win an additional $500 each.

To make its coating, PolyClean developed a novel technique for stacking layers of varying sizes of block copolymers, which consist of two or more different polymer chains linked together. Combined with chemical treatment, that special topography creates a surface contact angle above 150 degrees, producing a super-hydrophobic surface that repels water. Moreover, the nanoscale patterns and features on the surface are smaller than the wavelength of visible light, so the end result is basically a sturdy, clear coating. In a video demonstration, the team showed how a single stream of water flows off a piece of the coating without sticking, while the water completely obscures a regular piece of glass.

That coating can be applied to windshields in the post-processing stage of manufacturing. Down the road, however, the material could also be applied to eyeglasses and microfluidics devices, and to solar panels to stop damage due to water leaking into the circuitry, Gadelrab said.

With the prize money, PolyClean plans to refine the coating, with aims of developing a working prototype for business competitions and startup accelerators. MADMEC, Gadelrab added, is a good “launch point” for commercial ideas, as the contest emphasizes developing the technology and prototypes, instead of creating a business. “[MADMEC] allows you to grow and explore ideas, with no constraints on your mind,” he said. “Then when you come up with the product, you start approaching other business competitions.”

The $6,000 second-place winner was the undergraduate team the Soil Network, which has developed a treatment that can be sprayed on top of soil to increase retention of nutrients and water. The solution consists of sodium alginate — a natural polysaccharide — and the inorganic compound calcium chloride, which creates a solid substrate on the top layer of the soil that stops it from being washed away.

Taking third-place for $4,000 was Hydroglass, a team of PhD students, which developed a hydrogel that can be added to the surface of windows, making them switch from transparent to opaque in response to temperature. The hydrogel relies on a custom mixture of polymers that turns opaque as it absorbs heat — up until about 34 degrees Celsius — and then turns transparent and releases heat in response to cooling temperatures. “On a cold day, it’s going to be clear, and on warmer day, if it gets really hot out, it’s going to become opaque,” said team member Seth Cazzell, a PhD student in DMSE. “What we have is this passive, self-shading device that responds to ambient temperature.”

The two other competing teams were: Miocoo, which has developed a portable device that can measure the amount of protein, carbohydrates, and fat in breast milk and relay that information to a mobile app; and Flux, which developed a way to make transparent super-hydrophobic coatings for solar panels, windows, and other applications more quickly and cheaply than traditional methods.

This year was MADMEC’s 10-year anniversary. In opening the competition, Michael Tarkanian, a lecturer in DMSE who runs MADMEC, said, “This year, I think, might be the strongest year we’ve ever had.”

When the contest started in 2007, Tarkanian added, it was one of the only hardware-based contests at MIT that focused on experimentation. That mission remains today, he added. “What we want to do is give people the opportunity … to take a risk and try something different.”

Contest judges were MIT faculty and alumni from DMSE, and representatives from the contest’s sponsoring companies. One judge, Shakeel Avadhany, was the third-place winner at the first MADMEC, in 2007. His company, Clear Motion (formally Levant Power), is now designing shock absorbers that improve vehicle handling while generating electricity to improve overall efficiency.

Several other former MADMEC competitors have started companies based on their inventions: Embr Labs, winner of the 2013 competition, is developing a thermoelectric bracelet that heats and cools the body; AquaFresco, the 2014 first-place winner and a finalist in this year’s $100K Entrepreneurship Competition, is developing a water-recycling technology that lets people use one batch of soapy water to clean their laundry for several months.