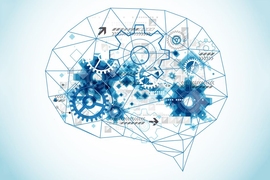 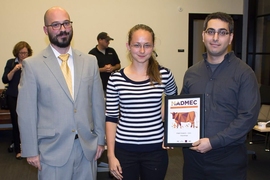 ↓ Download Image
Caption: (left to right) Michael Tarkanian, who runs MADMEC, stands with Alexandra Sourakov and Ahmed Al-Obeidi of Glasswings, the winning team of the MADMEC competition. The MIT team created a low-cost coating for solar cells that mitigates reflection, allowing the cells to absorb nearly all light to boost efficiency. 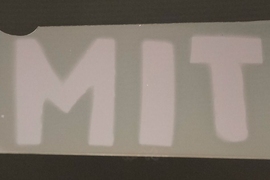 Caption:
(left to right) Michael Tarkanian, who runs MADMEC, stands with Alexandra Sourakov and Ahmed Al-Obeidi of Glasswings, the winning team of the MADMEC competition. The MIT team created a low-cost coating for solar cells that mitigates reflection, allowing the cells to absorb nearly all light to boost efficiency.

Biomimicry — known as “innovation inspired by nature” — has led to the invention of bullet trains, vaccines, adhesives, and light bulbs, among other things.

Add to that list the winning invention of last night’s MADMEC competition: Influenced by the anti-reflective wings of the glasswing butterfly, an MIT team created a low-cost coating for solar cells that mitigates reflection, allowing the cells to absorb nearly all light to boost efficiency.

For that invention, the two-student team, aptly named Glasswings, took home the grand prize of $10,000 from the ninth annual MADMEC contest, organized each year by MIT’s Department of Materials Science and Engineering (DMSE) and sponsored this year by Saint Gobain, and Dow Chemical.

Second-place team Lumos won $7,000 for developing photoluminescent road paint — for use in crosswalks, highway lines, and other road markings — that absorbs sunlight during the day so it can glow in the dark. The team TTRM took home the third-place prize of $5,000 for developing a phase-changing material that adds or removes air in car tires to mitigate the undesirable effects of underinflated or overinflated tires — such as tire wear and reduced efficiency.

With the prize money, Glasswings plans to continue research and development and, potentially, launch a company to commercialize the invention, team member Ahmed Al-Obeidi, a graduate student in DMSE, told MIT News after the competition.

“How we make what we have scientifically valid and make it a business is something I haven’t done before and something that sounds interesting,” he said. “We have a proof of concept and now we have to see where we fit in the landscape.”

Starting in June, MADMEC hosts several events that walk competing teams through development milestones, such as feasibility studies and refining their prototypes. All teams (usually around 10) receive $1,000 to prototype, and the winners of three mini-contests win an additional $500 each.

Reflection is an issue for many optoelectronic devices, including photovoltaics, smartphone displays, and windows, Al-Obeidi said during his team’s presentation. Typical solar cells made of silicon, for instance, reflect up to 30 percent of light, reducing efficiency.

As a solution, manufacturers use anti-reflective coatings. But these coatings are expensive to produce and even still don’t absorb all light. “We asked the question, ‘How does nature solve these problems?’” Al-Obeidi said, “because nature usually has a pretty interesting solution.”

As it turns out, the transparent wings of the glasswing butterfly are coated with nanostructures that resemble tapered pillars on pedestals. These “nanopillar” structures act essentially as anti-reflective coatings, reflecting 2 to 5 percent of light from the butterfly’s wings.

The team reconstructed these tapered nanostructures in a coating, but kept the process simple, inexpensive, and scalable. To do so, they used common photovoltaic materials and fabrication tools. This involved depositing oxide on a glass film, applying a patterned mask of silver, and etching — removing layers from the surface, except those protected by the mask — with different gases.

But the trick was tweaking the etching gases during the process, which allowed them to customize the nanostructure shape. Essentially, they could shrink the diameter at the top of the structure and keep a thicker diameter at the base to create tapered nanopillars.

“That structure’s very unique, because it’s been shown by modeling that that has the best optical properties … which has to be structured by things that are more complicated than this simple technique,” Al-Obeidi said.

The coating is significantly less expensive and quicker than other anti-reflective coatings, Al-Obeidi said, and is economically viable for solar cells if the price point is less than $14 per square meter. The coating can also be used to reduce glare on glass and other displays.

Getting their hands dirty

While some teams like Glasswings may further develop their prototypes and take them to market after the competition, the primary aim is “to give students an opportunity to get their hands dirty and build something,” said Michael Tarkanian, a lecturer in DMSE who runs MADMEC.

“It’s distinctly a prototyping contest,” he added. “We wanted to give people an outlet to use their classroom knowledge and put it into practice.”

To develop their photoluminescent paint, the four-student team mixed and baked various ceramic powders. The final powder is suspended in paint to absorb light from the sun in the daytime — and car headlights at night — and release that energy as a bright glow during night hours. Areas with this paint won’t need streetlights and will be safer, as drivers can better see markings. Eliminating one in 10 streetlights in the United States, the team estimates, could save $156 million annually in electricity and maintenance costs, and reduce carbon emissions by an amount equivalent to that produced by 260,000 cars.

Spinning out the technology into a company is still up in the air, Chao said. But by going through the competition, she learned the ins and outs of manufacturing materials and how to work through all the unexpected results that come from mixing materials in the lab. “There are so many more variables that you are not aware of when you’re in the classroom,” Chao said.

Still, several former MADMEC competitors have started companies based on their inventions: Embr Labs, winner of the 2013 competition, is developing a thermoelectric bracelet that heats and cools the body, and Levant Power, the third-place winner at the first MADMEC, in 2007, is designing shock absorbers that improve vehicle handling while generating electricity to improve overall efficiency.

Energy savings in black and white