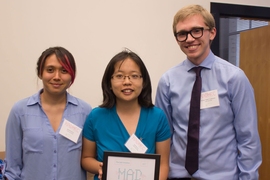 ↓ Download Image
Caption: The winning team, named A Salt Solution, won $10,000 for a prototype of a simple, low-cost hydrogel that can be incorporated into water desalination plants or placed directly into bodies of water to collect uranium. The team members are: (left to right) Jasmine Harris, Cynthia Lo, and William “Robin” Lindemann.
Credits: Photo: Tara Fadenrecht/DMSE 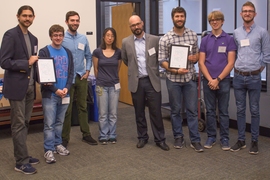 ↓ Download Image
Caption: At center is Mike Tarkanian, a senior lecturer in the Department of Materials Science and Engineering and MADMEC competition organizer. Flanking him are two teams, Geoworks (left) and DUMBLEDORE (right), which split second and third place prizes of $7,000 and $5,000.
Credits: Photo: Tara Fadenrecht/DMSE

Caption:
The winning team, named A Salt Solution, won $10,000 for a prototype of a simple, low-cost hydrogel that can be incorporated into water desalination plants or placed directly into bodies of water to collect uranium. The team members are: (left to right) Jasmine Harris, Cynthia Lo, and William “Robin” Lindemann.
Credits:
Photo: Tara Fadenrecht/DMSE

Caption:
At center is Mike Tarkanian, a senior lecturer in the Department of Materials Science and Engineering and MADMEC competition organizer. Flanking him are two teams, Geoworks (left) and DUMBLEDORE (right), which split second and third place prizes of $7,000 and $5,000.
Credits:
Photo: Tara Fadenrecht/DMSE

An inexpensive hydrogel that can extract uranium from water to provide more fuel for nuclear power plants took home the grand prize from this year’s MADMEC competition on Oct. 10.

A team of MIT materials science and engineering students, named A Salt Solution, won $10,000 for a prototype of a simple, low-cost hydrogel that can be incorporated into water desalination plants or placed directly into bodies of water. Uranium then accumulates on the hydrogel’s surface for extraction.

Similar hydrogels — which are chains of hydrophilic polymer chains — have been proposed for uranium mining in seawater. But the team tweaked a certain polymer that can be purchased at industrial scales for much lower costs.

“Because it’s simple to make, and [based on an already] well-developed technology with a slight modification, it’s an economically feasible material that can passively collect uranium from water,” team member Cynthia Lo told MIT News.

Two other teams split the second and third place prizes of $7,000 and $5,000: DUMBLEDORE, which is developing an automated wrinkling-and-unwrinkling coating for ships that staves off bacteria and other organisms more efficiently and with less pollution than other methods; and Geoworks, which is developing porous bricks made of geopolymers (minerals that are mixed and gel together to form solid materials) that can insulate buildings at lower cost and with greater efficiency than traditional insulating materials.

The fourth competing team, Illumination, developed a lower-cost material for generating blue light, which can be used for lighting and other applications.

Uranium from the sea

Uranium, which is mined from the ground, is used as fuel in nuclear power, one of the most efficient forms of energy. But there’s about 4 billion tons of uranium in seawater, compared to 10 million tons on land. In fact, extracting all the ocean’s uranium could in theory provide enough of the material to power major cities around the globe for thousands of years.

A Salt Solution came up with their idea while conceptualizing a material that could be attached to sea coral to collect uranium. But that was too expensive and complex to complete for the competition. To keep things cost-effective, the team modified a common polymer gel used for other purposes, by incorporating molecules that attract uranium.

“It looks a little complicated, but it’s pretty simple,” team member William “Robin” Lindemann said during the team’s winning presentation, pointing to a projection of the polymer’s chemical makeup. “You can probably [make] it in your basement.”

One idea is to implement a system that contains plates of the hydrogel into water desalination plants, where seawater goes through reverse osmosis to produce fresh water and waste brine. “This brine is what we want to target, because it [has a] higher concentration of uranium,” team member Jasmine Harris said.

Before disposal, the brine could flow over the hydrogel plates for uranium extraction. Uranium can also be easily washed off the hydrogel, so the gel can be reused more than a dozen times before it becomes economically infeasible.

Another idea is to simply float the hydrogel on a buoy or directly in bodies of water. “You can probably just put this gel in a cheesecloth bag and let it float [in water], and a couple weeks later you’d end up with a bunch of uranium stuck to it,” Lindemann told MIT News.

With the prize money, the team plans to further develop the technology and potentially publish a paper on their work.

The annual MADMEC competition is hosted by MIT’s Department of Materials Science and Engineering (DMSE) and sponsored by Saint-Gobain and Dow Chemical.

For the finale, four MIT student teams delivered oral and poster presentations explaining the inventions they’d built over the summer to solve various sustainability issues. Starting in June, MADMEC hosts several events that walk the competitors through development milestones, such as feasibility studies and refining prototypes. All teams (usually around 10) receive $1,000 to prototype, and the winners of three minicontests win an additional $500 each.

The contest challenges students to build prototypes of technologies that improve sustainability in energy, transportation, infrastructure, and other sectors. “Really the big picture of the contest is about giving students a chance to develop their own ideas and execute prototypes outside of their normal classwork or research,” Mike Tarkanian, a senior lecturer in DMSE and competition organizer, said in his opening remarks.

For the winning team, the MADMEC competition certainly provided a platform for some rapid prototyping. “I’ve never had to pull something like this together so quickly,” Lindemann told MIT News. “And the competition drove us to a better end result.”

Contest judges were MIT faculty and alumni from DMSE, and representatives from the contest’s sponsoring companies.

Tarkanian also noted that several former MADMEC competitors have launched companies based on their MADMEC inventions. Clear Motion (formally Levant Power), was the third-place winner at the first MADMEC in 2007 and went on to raise $130 million to develop shock absorbers that improve vehicle handling while generating electricity to improve overall efficiency. Embr Labs, winner of the 2013 competition, just sold nearly half a million dollars’ worth of preorders for its commercial thermoelectric wristband that heats and cools the body.

“What you will see [during the finale] are often early-stage technologies that grow and get bigger and change over time, and turn into real products,” Tarkanian said.