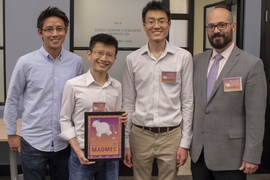 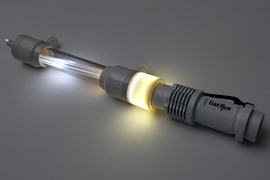 The team that developed the system, Fiat Flux, received the $10,000 grand prize after five student teams presented their final results from the five-month materials science competition. Each team, made up entirely of current MIT students, spent the summer participating in mini-contests and feasibility studies that encouraged hands-on experimentation.

Fiat Flux, which was also an MIT Clean Energy semifinalist this year, uses light to trigger a chemical reaction that combats the accumulation of dirt and other foulants in membrane-based water filtration systems. The foulants can lead to degradation, increased energy expenditures, high operating pressures, and other inefficiencies that can cut such systems’ productivity by more than half.

“We’ve done interviews with people in the field and they all tell us the same thing: These [filtration] membranes never operate at the rate they are supposed to,” said Fiat Flux Chief Technology Officer Alvin Tan, who is pursuing a PhD in materials science and engineering at MIT.

With roughly a third of the world’s population currently living in water-stressed regions, the solution offers a potential path to improving access to clean water.

The Gryffindor team took home the second-place prize of $6,000 after its three members, all of whom are materials science graduate students, developed an inexpensive system for efficiently applying graphene to the surface of metal substrates to improve fatigue resistance. Using a custom electro-thermo-mechanical measurement system, the team showed that a copper wire coated in graphene exhibited less damage when exposed to cyclic stresses over time, compared to bare copper wires.

“This is a huge problem, both with respect to wasted energy and wasted money,” Gryffindor team member Skylar Deckoff-Jones said of fatigue in systems such as wires, infrastructure, and aerospace and consumer products. “It’s estimated that roughly 4 percent of the U.S. GDP is used annually just to replace old components that degrade over time because of fatigue failure.”

Boston Boron Company was awarded third place for its novel design of a system that leverages a process called molten oxide electrolysis (MOE) to produce boron. When compared to traditional processes, the company’s prototype produced boron for less than one-tenth the cost at a similar purity.

The other two teams that presented were Technologies for Integrated Photonic Sensors, or TIPS, which developed a solution that addresses problems related to using integrated photonic chips in sensors; and HydroHome, which identified a mechanism for sustaining deep sea microorganisms in a laboratory setting.

The teams gave oral and poster presentations to judges and attendees as the last step of the competition. MADMEC is a competition for student teams to develop and build technologies that use materials science to address problems of sustainability. Teams are provided with lab space, up to $1,000 in funding, and expert guidance to work through a series of developmental milestones and develop a prototype.

“The real goal here is for students to do some prototyping, get their hands dirty, literally and figuratively, and learn how to drive a project,” Michael Tarkanian, a senior lecturer in Department of Materials Science and Engineering (DMSE) who runs MADMEC, said during opening remarks.

MADMEC is hosted by DMSE and sponsored by Saint Gobain and the Dow Chemical Company. It is different from accelerators and startup competitions on campus in that it focuses on research and prototyping rather than developing business plans and starting a company. Tarkanian says that approach allows students to pursue ideas they may not think are immediately commercially viable.

“[MADMEC’s] emphasis is on students getting experience with hands-on materials processing, and learning how to run their own research project,” Tarkanian explained.

That said, since MADMEC’s founding in 2007, a number of participants have gone on to win larger competitions and start companies, including AquaFresco (the 2014 MADMEC winner), Embr (2013 winner) and Clear Motion (formerly Levant Power, third-place winner in 2007).

The judges of this year’s competition were C. Cem Taşan, the Thomas B. King Career Development Professor of Metallurgy at MIT; Thomas Kalantar PhD ’90 of Dow Chemical; Nicholas Orf PhD ’09 of Saint Gobain; and Ockert Van Der Schijff of Exponent.