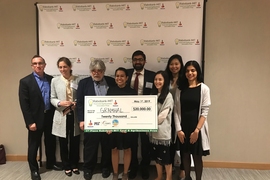 A team that helps small-scale farmers in India increase their profits and another looking to create an international trading marketplace for shrimp took home prizes at Wednesday’s Rabobank-MIT Food and Agribusiness Innovation Prize.

Gramhal, whose mobile tools help smallholder farmers sell their crops, won the first-place prize of $20,000. Velaron was awarded the $10,000 second-place prize for its plan to organize the international shrimp trade into a commodity market.

The winners were chosen from a group of seven finalists that shared their business plans at the annual event, which is sponsored by Rabobank and MIT’s Abdul Latif Jameel World Water and Food Systems Lab (J-WAFS) and is hosted by the MIT Food and Agriculture Club.

Each student team pitched for five minutes in front of a crowded audience at MIT’s Samberg Conference Center. A panel of eight judges from across the food and beverage industries ultimately decided on the winning teams.

The five other teams came from 11 schools around the country. They included:

This was the fourth year of the prize, and event director Lee Stroman, an MBA candidate at the Sloan School of Management, said it was the most competitive year yet, with judges receiving nearly 50 project applications, twice as many as in 2018.

The majority of small-scale farmers in India use informal creditors to finance their purchases of seeds, fertilizers, and pesticides each season. At harvest, these farmers face pressure to quickly sell their crops in order to repay their loans. Even if they want to wait for more favorable market conditions, the farmers’ lack of access to storage facilities forces them to make hasty sales.

The situation has led to a cycle of debt and distress for millions of people. Gramhal is helping these farmers with a multifaceted mobile solution. First, the company has partnered with a bank to offer farmers credit that reduces their need to sell crops immediately. The loans can be delivered directly to the farmers through the company’s platform.

“I’m from a small village in India, and growing up, I lived through the struggles of small-hold farming every day,” Gramhal founder and CEO Vikas Birhma told the audience during his pitch. “Distressed selling is the root cause of agrarian distress, and like my household, 62 million households in India face the same selling problems, leading to one farmer suicide every half an hour.”

Gramhal is currently working with farmers harvesting food grains, a market which it estimates is worth $86 billion in India alone. The company plans to help over 1,000 farmers this year and get 7,500 farmers on its platform in 2020.

Birhma says the prize money will help his team improve their mobile platform and continue to scale.

Making the market for shrimp

The international shrimp trade currently relies on intermediaries and personal relationships to facilitate imports and exports. The result is a system with inefficient trading routes and a large degree of uncertainty about future prices and supply.

Velaron is hoping to change that, first with an online trading marketplace for buyers and sellers, and eventually with a shrimp exchange for high volume trading.

When the marketplace is live, buyers will be able to use it to submit public requests for immediate or future deliveries, specifying the amount of shrimp they want, the port of entry, and the size of shrimp. Shrimp farmers will then bid to deliver the shrimp, with Velaron matching asks and bids, coordinating delivery logistics, and clearing all transactions.

Velaron plans to use the transaction data it collects to design standardized shrimp contracts and create a global shrimp exchange for immediate and future trading. Futures trading is attractive for buyers, who want to secure supply for times of peak demand, and sellers, who want to protect themselves against price fluctuations in a process known as hedging.

The system would be similar to how corn farmers currently ensure their profits are more consistent each year by locking in a future price before harvest to protect them against corn surpluses or shortages later on.

The company is hoping to facilitate 1 percent of U.S. shrimp imports over the next year, and then target one percent of worldwide shrimp trading by 2021. Through commissions, charging for its logistic services, and investing the outstanding asks and bids, Velaron’s team believes it could generate $20 million in revenue by 2021.

“Aquaculture technology is booming, but no attention has been given to aquaculture’s financial needs,” said Velaron co-founder Pablo Ducru, who is currently pursuing his PhD at MIT in nuclear physics and computational engineering. “The MIT-Rabobank prize will help us bring seafood trading to the 21st century.”