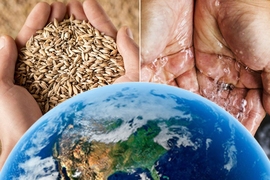 A team of MIT and Harvard University students won the first-ever Rabobank-MIT Food and Agribusiness Innovation Prize on Thursday night for an idea to make India’s temperature-controlled supply chain for food — or “cold chain” — more affordable.

The team, GoMango, is developing smart, modular, refrigerated shipping boxes that can be rented out individually to cut costs and save billions of dollars in spoiled perishable goods in India. This innovation earned GoMango the first-place prize of $12,000 at the competition, which was organized by the student-run MIT Food and Agriculture Club to support early-stage ventures focusing on food and agriculture sustainability.

For the competition, six finalist teams pitched ideas to a panel of judges from academia and industry, and a capacity crowd, in the Samberg Conference Center. A team of MIT students, Safi Organics, earned the $8,000 second-place prize, and a team of MIT and Harvard University students, Ricult, won a $5,000 third-place prize. Other inventions included edible eating utensils, nanosensors for plants, and robotic hay compactors.

Competition co-sponsors were MIT’s Abdul Latif Jameel World Water and Food Security Lab (J-WAFS) and Rabobank, one of the largest banks in the world that caters specifically to food and agribusiness clients.

Keynote speaker was Brent Overcash, who directs Emerging Technologies for the Food + Future coLAB, a collaboration between Target, the consulting firm IDEO, and the MIT Media Lab.

In GoMango’s pitch, team member and MIT alumnus Naren Tallapragada ’13, now a PhD student at Harvard University, said refrigerated trucks are rare in India, because they’re too expensive for producers and wholesalers to rent or own. By some estimates, there are as many refrigerated trucks in Boston as there are in the whole country of India.

With shipping routes sometimes spanning hundreds of miles in very hot temperatures, nearly 40 percent of India’s fruit and vegetables spoil before reaching customers, Tallapragada said: “This means hundreds of millions of people are malnourished [and] billions of dollars are wasted.”

To address the issue, GoMango invented refrigerated boxes that can be collapsed, and stored in partnering cold-storage warehouses. Food producers and wholesalers can rent exactly as many boxes as needed and stack them on traditional dry trucks, which cost roughly $100 less than refrigerated trucks.

Boxes are stuffed with packs filled with innovative phase-change materials, much like giant ice packs. They’re kept frozen until packed with food — such as fruits and vegetables and meats and fish — and liquefy throughout a trip to keep contents cool for up to three days. Each box also connects to the Internet to track location, temperature, humidity, and payment information.

“We think that we can have a great social impact by getting more food to market, affordably and in an environmentally friendly way, thereby doing our part to keep the developing world healthier, wealthier, and a cleaner place,” Tallapragada said.

GoMango’s prize money will go toward developing commercial prototypes to pilot in India in the coming months. Other presenting team members were Francesco Wiedemann, a visiting researcher in the Changing Places group at the MIT Media Lab, and Juan Carrascosa, an MIT Sloan School of Management student.

The prize competition is another in a growing list of MIT initiatives — including J-WAFS, which was launched in 2014 — that caters to students interested in food and agribusiness entrepreneurship, said MIT Food and Agriculture Club President Sarah Nolet, an student in MIT Sloan and fellow in the System Design and Management Program.

“There’s so much interest around food systems innovation, around changing the food systems, and even just understanding it, and there hasn’t been a good place to go to explore that," Nolet said. “With J-WAFS, the Food and Agriculture Club, and now this prize, we’re giving people who are interested some place to hang their hats, get involved, and join our community.”

The competition started last fall, with a generator event that brought together more than 100 student entrepreneurs to meet and form teams. Dozens of teams then submitted ideas and were winnowed down to nine finalist teams that were matched with mentors from academia and industry. Mentors worked with the teams for three months to help them develop the final business plan submissions and presentations.

In his welcoming remarks, J-WAFS Director John H. Lienhard V, the Abdul Latif Jameel Professor of Water and Food, said the prize competition furthers MIT’s longtime mission of promoting agricultural innovation. He pointed to the inscription along the ceiling of MIT’s Lobby 7 that reads: “Established for Advancement and Development of Science its Application to Industry the Arts Agriculture and Commerce.”

“Our focus on agriculture is literally carved in stone,” Lienhard said. “The prize tonight continues that tradition, and expands and amplifies [innovation] in food and agribusiness.”