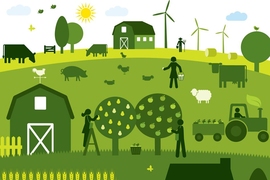 ↓ Download Image
Caption: At the second annual Rabobank-MIT Food and Agribusiness Innovation Prize competition, seven finalist startups and teams from MIT and other universities pitched their business ideas to a panel of judges, for a chance to win prizes totaling $25,000. The pitches addressed some of today’s most pressing issues in the food and agriculture industries.

Caption:
At the second annual Rabobank-MIT Food and Agribusiness Innovation Prize competition, seven finalist startups and teams from MIT and other universities pitched their business ideas to a panel of judges, for a chance to win prizes totaling $25,000. The pitches addressed some of today’s most pressing issues in the food and agriculture industries.

Caption:
A first-place prize of $12,000 went to MIT-Tufts University team Cambridge Crops, which is developing a silk-based coating that extends the shelf life of fruits and vegetables by up to 50 percent. Pictured are Cambridge Crops team members (left to right) Livio Valenti, Jacques-Henry Grislain, and Benedetto Marelli.
Credits:
Photo: Tom Dao

A coating that increases the shelf life of produce, a spray that reduces pesticide pollution, and software that optimizes farming operations were the big winners at the second annual Rabobank-MIT Food and Agribusiness Innovation Prize competition.

At last night’s event, seven finalist startups and teams from MIT and other universities pitched their business ideas to a panel of judges, for a chance to win prizes totaling $25,000. The pitches addressed some of today’s most pressing issues in the food and agriculture industries.

A first-place prize of $12,000 went to Cambridge Crops, which is developing a silk-based coating that extends the shelf life of fruits and vegetables by up to 50 percent. Winning second place for $8,000 was Ecospray, which is developing a spray that helps farmers drastically cut pesticide usage, lowering costs and reducing pollution. The third-place $5,000 prize was awarded to WISRAN, which improves profits for farmers with software that analyzes, in real-time, the time, cost, and effectiveness of farming activities.

The competition was sponsored by Rabobank — one of the largest banks in the world that caters specifically to food and agribusiness clients — and supported by the Abdul Latif Jameel World Water and Food Security Lab (J-WAFS) and the MIT Food and Agriculture Club.

In his welcoming remarks, J-WAFS Director John H. Lienhard V, the Abdul Latif Jameel Professor of Water and Food at MIT, said the competition represents a major goal of J-WAFS: nurturing food and agribusiness startups. This is especially important, he said, with the global population projected to reach 10 billion people by 2050, a scenario in which many people will lack regular access to water and food.

“We firmly believe the solution to many of these problems really is to create entities that will go out on their own, as businesses, and propagate new and good ideas,” he told a capacity crowd of attendees in the Samberg Conference Center.

MIT-Tufts University team Cambridge Crops developed a coating that’s 99 percent water and 1 percent silk fibroin — a protein similar to that found in the gland of a caterpillar. Soon after the coating is applied to crops, the water evaporates, leaving a flavorless, edible silk film. That film reduces cell respiration and water evaporation, which can drastically slow ripening and spoiling of produce.

The technology is based on research at Tufts University by Benedetto Marelli, now the Paul M. Cook Career Development Assistant Professor in MIT’s Department of Civil and Environmental Engineering. Marelli and other Tufts researchers published a paper in Nature last year showing that the coating can extend by 50 percent the shelf-life of strawberries, which generally have a shelf-life of less than 10 days.

“We have technology that can dramatically reduce waste at every step of the value chain, for producers, distributors, and consumers,” said team member Jacques-Henry Grislain MBA ’16, during the team’s winning pitch.

After receiving a big check by competition organizers, Grislain told MIT News that the prize money will help fund the team’s ongoing experiments that aim to ensure the coating is commercially viable. Other commercial technologies, such as controlled atmosphere storage, are now being used to slow food spoilage, he said: “But we want to make sure we have the best and most efficient solution on the market.”

In delivering MIT team Ecospray’s pitch, Maher Damak, a graduate student in mechanical engineering, said only about 2 percent of pesticides sprayed on plants stick, while the rest bounces off and flows into streams and rivers, causing pollution. About 200,000 people worldwide die from pesticide poisoning annually, according to recent reports from the United Nations. Farmers spend roughly $100 billion on pesticides annually.

“Our mission is to eliminate all pesticide waste, while saving growers tens of billions of dollars per year,” Damak said.

Because plants are hydrophobic (water-repelling), liquid pesticide droplets tend to bounce off the surface. For four years, Damak, associate professor of mechanical engineering Kripa Varanasi, and other MIT researchers developed a spray that applies two different additives to a pesticide — one produces a negatively charged droplet; the other, a positively charge droplet. When the two oppositely charged droplets meet on a plant, they form hydrophilic (water-attracting) bumps that catch the droplets. This retains 10 times more liquid, meaning only one-tenth the amount of pesticide needs to be used to have the same effect. The spray’s efficacy was detailed in a 2016 paper co-authored by Damak, Varanasi, and other MIT researchers and published in Nature Communications.

Third-place winner WISRAN uses a system of cloud-connected sensors to monitor, in real-time, the efficiency of various types of farming equipment. Data collected from the sensors are uploaded to a cloud platform, where machine-learning algorithms analyze the data to provide financial metrics of labor and equipment. A farmer could, say, tag a tractor to determine the wasted, idle, and productive time of the vehicle, or monitor leakage of watering equipment. The system also analyzes the total costs of managing machinery, paying labor, and loading up on gas. With those insights, according to the team, farmers can boost profits by 10 to 30 percent.

“We are a company that identifies hidden inefficiencies in agriculture, so growers can increase their profits,” said team member Arsalan Lodhi, a graduate of New York University who has worked in the tech industry for more than a decade.

The other finalist teams were: Preserve-air, which designed an inflatable temporary storage room that reduces the effects of the sun on crops at select times; Rooted, which makes snack bars made of algae, a sustainable and nutritious alternative to animal protein; AquaOne Technologies, which develops novel water desalination technology that stops salty water from damaging the nutrient content of crops; and Foodfully, an app that links with grocery store loyalty cards and scans receipts to notify users before food goes bad, and to provide recipes and waste-reduction tips.

Getting ideas off the ground

This year, there were 28 submissions for the competition, which started last November. In January, judges selected the seven finalist teams, which were paired with mentors that helped develop business plans and pitches. Teams are not limited to MIT affiliates.

The competition is unique on campus and at MIT’s peer institutions, as it focuses specifically on supporting food and agribusiness startups, said Samantha Fahrbach, an MIT Sloan School of Management student and president of the Food and Agriculture Club. “It’s about bringing ideas to a place where they can get off the ground, and also solidifying MIT as a place where food and agriculture innovation happens,” she said.

While not every team can take home prize money, Fahrbach added, teams earn an important networking opportunity and “take away experience and insight into what it takes to pitch for funding, and really develop the idea from the initial stage into a fully fledged business plan that you can explain and convince people will be successful.”

Keynote speaker was Sam Schatz, managing director of corporate development at AeroFarms, a startup building vertical farms — stacked shelves of crops that can rise 40 feet — in warehouses in urban areas. Prompted by Fahrbach to offer advice to the competing teams, Schatz told the teams that the hard work has just begun.

“As much work as you’ve put in, the work starts once you get funding,” he said. “All those issues you had in raising the funding are going to be amplified once you have it. You’re always in fundraising mode, so keep that [fundraising] hat on.”