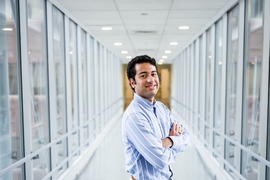 ↓ Download Image
Caption: “I’ve always been interested in technology and in the different ways in which you can make people’s lives better through [technological] tools,” Rodríguez says.
Credits: Image: Ian MacLellan

Caption:
“I’ve always been interested in technology and in the different ways in which you can make people’s lives better through [technological] tools,” Rodríguez says.
Credits:
Image: Ian MacLellan

William Rodríguez grew up resetting the family router and fixing all things technological in his home in San Juan, Puerto Rico. When the self-described computer junkie began to look at colleges, he knew that MIT was the right fit.

“I’ve always been interested in technology and in the different ways in which you can make people’s lives better through [technological] tools,” Rodríguez says. “MIT had that spirit of using technology and underscoring the importance of innovation.”

Once he arrived in Cambridge, Rodríguez followed his passion for computer science and majored in electrical engineering and computer science. After taking 14.73 (The Challenge of World Poverty) taught by Esther Duflo, the Abdul Latif Jameel Professor of Poverty Alleviation and Development Economics, Rodríguez decided to declare a minor in economics.

“I learned that economics was basically applying science to humans, to the systems we create, and to the ways we think,” Rodríguez says. “I enjoy engineering, but I also really enjoy the humanities and social sciences, so this pairing came naturally to me.”

Rodriguez’s dual interests in technology and in his fellow humans have also merged in his many extracurricular activities at MIT. Whether teaching entrepreneurship in Brazil, volunteering on campus, or helping to lead MIT’s Model UN organization, he is happiest when broadening his horizons and helping others do the same.

Before coming to MIT, Rodríguez studied French for five years. Determined to keep practicing the language, he studied conversational French during his first year at the Institute. Intending to learn more languages on top of English, Spanish, and French, Rodríguez scanned the language course offerings and enrolled in Portuguese for Spanish speakers. After practicing his Portuguese throughout the semester, he decided to pursue a summer internship in Brazil through MIT International Science and Technology Initiatives (MISTI).

Rodríguez interned at Take.NET, a mobile technology company based in Belo Horizonte, Brazil. At Take.NET, he designed the marketing plan for the company’s new artificially intelligent chatbot. But that’s not all Rodríguez accomplished.

Rodríguez’s positive internship experience led him back to Brazil during his senior year Independent Activities Period (IAP) — this time to São Paulo to teach through the MIT Global Teaching Labs. Along with Massachusetts-area graduate and undergraduate students, Rodríguez served as a teaching assistant for a class on entrepreneurship. The class consisted of a series of entrepreneurship workshops targeted to approximately 100 Brazilian students, graduates, and professionals, covering topics “from the basics of choosing an idea and bringing an idea to market.”

In the future, Rodríguez says he could envision a future for himself in entrepreneurship.

“I believe it’s one of my long-term goals,” Rodríguez says. “I think it’s very powerful to choose an idea that you really believe in to help people in some way, and to have the tenacity, the perseverance, to build a team, lead a team, and bring the idea to market.”

But, before that, Rodríguez wants to learn at least two more languages, beginning with Japanese or Mandarin.

Before beginning his first semester at MIT, Rodríguez participated in the MIT Office of Minority Education’s Interphase EDGE program, a two-year scholarship program that begins in the summer before students arrive at MIT and helps ease the academic and social transition from high school to college.

After students complete the program, they have the opportunity to serve as associate advisors for incoming students. As an associate advisor, Rodríguez checks in with a cohort of 16 students throughout their first few semesters at MIT, sometimes recommending classes, decoding internship applications, or lending a sympathetic ear when students need to talk.

“I really valued the relationships I built, so I saw [advising] as a way to give back to the new students who were coming in through the program,” Rodríguez says.

After Hurricanes Irma and Maria swept across Puerto Rico, Rodríguez teamed with fellow senior Gabriel Ginorio to organize a three-day donation drive in October through the MIT Association of Puerto Rican Students. The money and supplies gathered through the drive served over 5,000 Puerto Rican residents.

For his work in public service, Rodríguez was recognized as an MIT Distinguished Peer in Public Service this past October.

During high school, Rodríguez was an active member in Model United Nations, an international student organization that simulates the workings of the United Nations assembly. The experience sparked an interest in international affairs and policy that he wanted to continue during his time at MIT.

Part of planning the competitions involves generating the prompts students compete with in competition. At MIT’s annual Model United Nations competition, students have worked on a wide range of issues, ranging from “the monetary challenge of cryptocurrency, nuclear power as a viable source of energy, and how governments tackle climate change.”

Rodríguez served as chief operating officer of the student organization during his sophomore year, and as president during his junior year. Eager to bring the competition to the international stage, he founded the first international chapter of the conference, which was held in Shanghai, China, this past year.

“I really value the mission [of Model United Nations],” Rodríguez says. “You want to broaden the horizons so that students are exposed to problems and issues that they might never encounter in a typical classroom setting — problems involving countries and cultures different from their own.”

This coming August, Rodríguez plans to travel back to Shanghai for the second international conference. His involvement with international policy may not end there. “I’ve considered going into roles in economic development research and policy, whether it be a role in the United Nations or a government,” he says. “This could be the scope of things I’d be happy being involved with.”