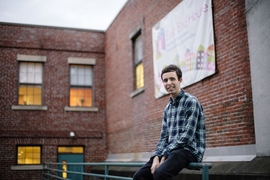 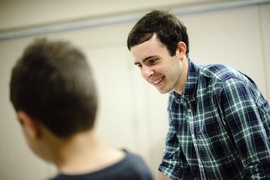 ↓ Download Image
Caption: Bent has worked at the East End House with second through fourth graders since 2014. Students are bused after school to the community center, where they then work with Bent.

Caption:
Bent has worked at the East End House with second through fourth graders since 2014. Students are bused after school to the community center, where they then work with Bent.

Before senior Drew Bent began his undergraduate studies at MIT, he considered his interests in education to be “side projects.” He had worked at the educational platform Khan Academy and at Sony Ericsson while he was a high school student, employing what he had considered his main skill set since he was a child: programming.

“Basically, programming is all I did,” Bent says, “I used to be very much a technocrat.”

At MIT, Bent opted to double major in physics and electrical engineering and computer science. But he also dipped his toes in writing, as a journalist for MIT’s undergraduate newspaper, The Tech.

By the end of his first year, Bent had a revelation: “The stuff that I was doing that I was most passionate about — the work that could have the most positive impact — was actually the side projects,” Bent recalls. “It’s the MIT education that can actually help me and enable me to do really powerful things in these areas.”

“I’m very interested in leveling the playing field with education. I see education as a way to give everyone their own unique voice,” Bent says. “Journalism is making sure that voice is actually heard in a democratic process. Successful democracy requires an educated populace whose voices are all heard.”

Since his freshman year, Bent has written over 35 articles for The Tech, covering campus news and research developments. Between his shorter news stories, Bent undertakes investigative journalism projects, some of which involve months of research.

“There are many aspects of journalism that are interesting, but the one that is most interesting to me is holding powerful actors accountable,” Bent says.

Bent’s reporting has spanned a wide variety of topics. His stories have included an investigation of an advertisement in The Tech that solicited an egg donor, a piece about the effects of a reorganization in MIT’s Information Services and Technology department, a profile of a student who was an Israeli military commander, and award-winning coverage of the trial of Dzhokhar Tsarnaev for his role in the Boston Marathon bombing. Other topics have included the closing of a fraternity, the discovery of gravitational waves, and other developments in student and residential life on campus.

“The [stories] that interest me are the ones that have someone whose voice wouldn’t have been heard otherwise and can actually lead to some change in policy,” Bent says, “Maybe [my writing] could start a conversation that wouldn’t have been there otherwise.”

In the summer of 2015, Bent traveled with a group of MIT and Harvard University students to 11 towns across America by bicycle, through Spokes America, a student-run educational initiative founded in 2013 by Turner Bohlen ’14.

As part of the initiative, Bent helped plan and organize learning festivals in urban and rural towns, which featured workshops on computer science, mechanical engineering, and electrical engineering. Bent liked the out-of-the-classroom approach of the program, which is geared towards middle and high school students.

“[Spokes America] really lets the students take the initiative, giving them the environment to build rockets, computer programs, and robots,” Bent says, “Science and engineering don’t have to be learned from a textbook.”

During his travels from festival to festival, Bent saw how interested the attendees  were in learning about engineering. Families who lived hours out of town would travel to festivals to partake in the Spokes America workshops.

“Everyone wants to bring everyone. Even parents want to go,” Bent says.

By using computer programming languages such as Scratch, which was developed by the MIT Media Lab’s Lifelong Kindergarten Group, participants were able to interact with engineering in a manner they hadn’t before.

Sometimes, Bent recalls, even children who hadn’t yet learned to read wanted to participate: “We weren’t going to say no to that.”

During the academic year, Bent regularly volunteers at the East End House, a Cambridge community center that holds educational programs for all ages.

Bent has worked at the East End House with 2nd- through 4th-graders since 2014. Students are bused after school to the community center, where they then work with Bent.

“First, they grab snacks, then you work with them for an hour on math and reading,” Bent says, “Then, you encourage them to go beyond.”

Sometimes, beyond isn’t much farther than the local playground.

“It goes beyond tutoring. You’re really becoming their buddy,” Bent says. What’s important to him is “the stuff that happens in the hours outside of the classroom.”

His volunteer work at the East End House is “usually the most rewarding part of the week, but also the most challenging part.”

“Students can tell if you’re not giving your best effort,” Bent says, “So you need to set a good example.”

In November 2017, Bent had a conversation with one of his tutoring students about college.

“Somehow she thought that intelligence is what got people to universities like MIT,” Bent says, “It’s largely the hard work that gets you there. She was genuinely surprised that it was hard work, and not just some predetermined ability.”

Bent says that students “need to realize they’re capable of anything.”

Beyond MIT, he hopes to foster environments in which this kind of learning and realization is common. Bent envisions being what his journalism professor, Ethan Zuckerman, calls a “public interest technologist” and wants to use his technical and investigative background to reform education.

Bent believes his MIT education will be crucial in his pursuit.

“We often think of MIT as a place that develops technologies, but it also cultivates mindsets that are useful elsewhere in society,” Bent says. “The MIT education enables us to give back in more ways than we can imagine.”

Bent has also served as a member of the MIT OpenCourseWare Faculty Advisory Committee and has collaborated with Institute committees on developing an educational pilot program for students to do semester-long internships while taking online MIT courses. Along with senior Gabriel Ginorio, he has worked closely with Sanjay Sarma, MIT’s vice president for Open Learning. He has interned with the World Bank and spent this past summer working in the White House Office of Science and Technology Policy helping to draft national technology policy. He was also a high school physics teacher with the MISTI Global Teaching Labs in Italy.

Reaching out to our neighbors