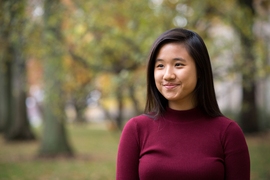 ↓ Download Image
Caption: “I decided to come to MIT because it was the best place to do engineering, and I eventually settled on materials science, because I felt like it was really applicable to all sorts of fields, including medicine," MIT senior Tiffany Yeh says. 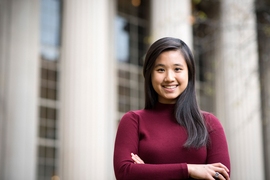 ↓ Download Image
Caption: “I decided to come to MIT because it was the best place to do engineering, and I eventually settled on materials science, because I felt like it was really applicable to all sorts of fields, including medicine," MIT senior Tiffany Yeh says.
Credits: Photo: Ian MacLellan

Caption:
“I decided to come to MIT because it was the best place to do engineering, and I eventually settled on materials science, because I felt like it was really applicable to all sorts of fields, including medicine," MIT senior Tiffany Yeh says.
Credits:
Photo: Ian MacLellan

As a teenager in a small school in Taiwan, Tiffany Yeh filled her days with Model UN and student government — and she knew that she would one day be a doctor. When it came time to choosing college, she thought, “OK, I have four years to do something different, whatever I want, and I should take that opportunity to explore a new field.”

“I really admired engineers. I just thought that they were really cool because they think outside of the box, and they can create a solution to most any problem that they see. I wanted to be like that,” says the MIT senior. “I decided to come to MIT because it was the best place to do engineering, and I eventually settled on materials science, because I felt like it was really applicable to all sorts of fields, including medicine.”

As an undergraduate, Yeh has immersed herself in materials science research to improve the ways drugs penetrate cancerous tumors. She has also nurtured her love of the piano and exposed herself to new experiences through internships around the world.

“During my time at MIT I traveled every summer and every IAP [Independent Activities Period], because from the beginning I had a big interest in international development, and getting to know different cultures, and exploring health care and poverty through working abroad,” she says. “None of this was planned from the start — my path has been like a bumblebee’s — but I realized that a lot of my interests centered on global health and health technologies, and eventually I started looking more at the policy side, as well as the education side.”

After finishing her first year, Yeh travelled to Sri Lanka with the MIT Global Startup Labs. She joined a team of three graduate students as an entrepreneurship assistant, and mentored two teams of young entrepreneurs on the ground. Both of Yeh’s Sri Lankan teams had interests in social good: One created a dyslexia therapy app, and the other developed an organic farm-to-table platform.

“Our partners on the ground were top CEOs or consulting firm heads, and they were just kind of like, ‘what is this kid doing here amongst all the other people on the team?’” Yeh recalls.

She threw herself into networking events and pitched her teams’ projects to interested local investors in the business community in Sri Lanka. She also tried to “spend time looking at their business model, and ask questions that were more outside of the box, and push them to look at their business from angles that they hadn’t really thought about before,” she says.

During IAP the following year, Yeh combined her interests in education and health care in Bangalore, at a non-governmental organization called EnAble India. After securing funding from the Priscilla King Gray Public Service Center, Yeh travelled to join the NGO’s pilot program to train people with severe disabilities for information technology internships in Bangalore’s companies.

Yeh taught basic computer skills and employability skills, and she sat in on group virtual sessions to give her students feedback on their interactions and the various roles needed to function in a company. She valued the experience but suspected that she wanted to have an impact on a larger scale. Last year, Yeh received funding from the MIT International Science and Technology Initiatives (MISTI) to intern with the World Health Organization (WHO) in Geneva.

Yeh worked in the Family, Women’s, and Children’s Health Cluster in the Assistant Director-General’s Office with the senior advisor on innovation. Her work focused on developing a health technologies assessment mechanism through WHO. While the U.S. for example, relies on the Food and Drug Administration to examine the merits of emerging technologies, devices are being developed especially for low-resource environments, and “it is exactly developing countries that don’t have the infrastructure to look at health technologies and decide which ones they should procure,” Yeh says.

Yeh began playing piano when she was four and stuck with the same teacher until she left for college. “Piano is a very big part of me, because it’s a way for me to stay grounded, and to process my emotions,” Yeh says. At MIT, she worried that she wouldn’t be able to find the same sort of teacher and close mentor. But almost as soon as she arrived, she found one in Timothy McFarland, an affiliate artist at MIT, with whom she has studied for the last four years.

As an Emerson scholar, Yeh receives private piano lessons and performs in a recital each semester. She also accompanies other Emerson scholars who play strings or woodwinds.

“When I look at a score, it feels like there are secrets hidden within it, secrets about emotions. It’s only when you play it and analyze it and tease out the emotions, you figure out this is what the composer was trying to convey,” she says. “It’s a way for me to feel maybe emotions that I had buried before, or that I didn’t feel like I could adequately express through words.”

Yeh also found a good research fit early on in her MIT career. As a sophomore, she joined the Laboratory for Multiscale Regenerative Technologies, led by Sangeeta Bhatia, the John and Dorothy Wilson Professor of Health Sciences and Technology and Electrical Engineering and Computer Science. There, Yeh has worked with postdoc Simone Schurle on magnetic microrobots called artificial bacterial flagella, or ABFs. These tiny robotic particles are modelled after the flagellar tails of the bacteria E. coli and are actuated by an external magnetic field.

So far, Yeh has shown this phenomenon in studies using a microfluidic device. A collagen matrix simulates the tumor, and the ABF is sent into a perpendicular channel that simulates the blood vessel. Using fluorescence, Yeh is able to see how deep the nanoparticles reach into the model tumor. She and Schurle are submitting a paper with their findings.

Yeh plans to attend medical school in the fall, though she says she still struggles with how to balance her many interests.

“The idea that I am having right now is, if I could work on a team in medical school where we are developing a new medical device, and then test it out in the field, and bring it to a low resource setting and see how it works there,” she says. “We can bring it back, prototype again, reiterate the process, and eventually take it to a patent stage and clinical trials, and get it out there and [get it] approved. I think it would be really cool to be part of a process like that.”