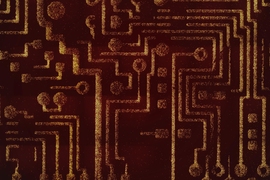 ↓ Download Image
Caption: This image shows a motherboard image micropatterned using programmable probiotic bacteria. The bright lines are composed of dots made of bacteria. This technique was developed in the Bhatia laboratory. Researchers delivered artificial genetic circuits into the bacteria which allow the microbes to kill cancer cells in three different ways.

Caption:
Researchers at MIT and the University of California at San Diego have delivered artificial genetic circuits into bacteria, allowing the microbes to kill cancer cells in three different ways. Here, an image of a motherboard has been micropatterned using programmable probiotic bacteria. The bright lines are composed of dots made of bacteria. This technique was developed in the lab of MIT professor Sangeeta Bhatia, who is a senior author on the new paper.
Credits:
Credit: Vik Muniz and Tal Danino

Researchers at MIT and the University of California at San Diego (UCSD) have recruited some new soldiers in the fight against cancer — bacteria.

In a study appearing in the July 20 of Nature, the scientists programmed harmless strains of bacteria to deliver toxic payloads. When deployed together with a traditional cancer drug, the bacteria shrank aggressive liver tumors in mice much more effectively than either treatment alone.

The new approach exploits bacteria’s natural tendency to accumulate at disease sites. Certain strains of bacteria thrive in low-oxygen environments such as tumors, and suppression of the host’s immune system also creates favorable conditions for bacteria to flourish.

The research team began looking into the possibility of harnessing bacteria to fight cancer several years ago. In a study published last year focusing on cancer diagnosis, the researchers engineered a strain of probiotic bacteria (similar to those found in yogurt) to express a genetic circuit that produces a luminescent signal, detectable with a simple urine test, if liver cancer is present.

These harmless strains of E. coli, which can be either injected or consumed orally, tend to accumulate in the liver because one of the liver’s jobs is to filter bacteria out of the bloodstream.

In their new study, the researchers delivered artificial genetic circuits into the bacteria, that allow the microbes to kill cancer cells in three different ways. One circuit produces a molecule called hemolysin, which destroys tumor cells by damaging their cell membranes. Another produces a drug that induces the cell to undergo programmed suicide, and the third circuit releases a protein that stimulates the body’s immune system to attack the tumor.

To prevent potential side effects from these drugs, the researchers added another genetic circuit that allows the cells to detect how many other bacteria are in their environment, through a process known as quorum sensing. When the population reaches a predetermined target level, the bacterial cells self-destruct, releasing their toxic contents all at once. A few of the cells survive to begin the cycle again, which takes about 18 hours, allowing for repeated release of the drugs.

“That allows us to maintain the burden of the bacteria in the whole organism at a low level and to keep pumping the drugs only into the tumor,” Bhatia says.

The researchers tested the bacteria in mice with a very aggressive form of colon cancer that spreads to the liver. The bacteria accumulated in the liver and began their cycle of growth and drug release. On their own, they reduced tumor growth slightly, but when combined with the chemotherapy drug 5-fluorouracil, often used to treat liver cancer, they achieved a dramatic reduction in tumor size — much more extensive than if the drug was used on its own.

This approach is well suited to liver tumors because bacteria taken orally have high exposure there, Bhatia says. “If you want to treat tumors outside the gut or liver with this strategy, then you would need to give a higher dose, inject them directly into the tumor, or add additional homing strategies,” she says.

In previous studies, the researchers found that engineered bacteria that escape from the liver are effectively cleared by the immune system, and that they tend to thrive only in tumor environments, which should help to minimize any potential side effects.

Martin Fussenegger, a professor of biotechnology and bioengineering at ETH Zurich, calls the new approach “unconventional” and “highly promising.”

“This is a fascinating, refreshing, and beautiful concept,” says Fussenegger, who was not involved in the study. “In a world of mainstream cancer therapy concepts with often limited success, new therapy strategies are badly needed.”

The researchers are now working on programming the bacteria to deliver other types of lethal cargo. They also plan to investigate which combinations of bacterial strains and tumor-targeting circuits would be the most effective against different types of tumors.

Boston Magazine reporter Dana Guth writes that MIT researchers are programming harmless strains of E. coli bacteria to destroy tumor cells. Guth explains that the programmed bacteria could be ingested or injected and “could offer a new way to stave off liver cancer.”