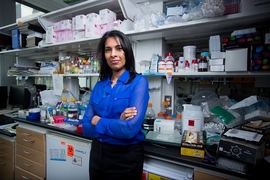 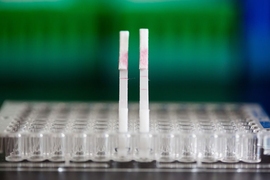 ↓ Download Image
Caption: The paper test strips, which work similar to a pregnancy test, reveal the presence of proteins associated with cancer. They can also be designed to detect other diseases.
Credits: Photo: Bryce Vickmark

Caption:
The paper test strips, which work similar to a pregnancy test, reveal the presence of proteins associated with cancer. They can also be designed to detect other diseases.
Credits:
Photo: Bryce Vickmark

Cancer rates in developing nations have climbed sharply in recent years, and now account for 70 percent of cancer mortality worldwide. Early detection has been proven to improve outcomes, but screening approaches such as mammograms and colonoscopy, used in the developed world, are too costly to be implemented in settings with little medical infrastructure.

To address this gap, MIT engineers have developed a simple, cheap, paper test that could improve diagnosis rates and help people get treated earlier. The diagnostic, which works much like a pregnancy test, could reveal within minutes, based on a urine sample, whether a person has cancer. This approach has helped detect infectious diseases, and the new technology allows noncommunicable diseases to be detected using the same strategy.

The technology, developed by MIT professor and Howard Hughes Medical Institute investigator Sangeeta Bhatia, relies on nanoparticles that interact with tumor proteins called proteases, each of which can trigger release of hundreds of biomarkers that are then easily detectable in a patient’s urine.

“When we invented this new class of synthetic biomarker, we used a highly specialized instrument to do the analysis,” says Bhatia, the John and Dorothy Wilson Professor of Health Sciences and Technology and Electrical Engineering and Computer Science. “For the developing world, we thought it would be exciting to adapt it instead to a paper test that could be performed on unprocessed samples in a rural setting, without the need for any specialized equipment. The simple readout could even be transmitted to a remote caregiver by a picture on a mobile phone.”

Bhatia, who is also a member of MIT’s Koch Institute for Integrative Cancer Research and Institute for Medical Engineering and Science, is the senior author of a paper describing the particles in the Proceedings of the National Academy of Sciences the week of Feb. 24. The paper’s lead authors are graduate student Andrew Warren, postdoc Gabriel Kwong, and former postdoc David Wood.

In 2012, Bhatia and colleagues introduced the concept of a synthetic biomarker technology to amplify signals from tumor proteins that would be hard to detect on their own. These proteins, known as matrix metalloproteinases (MMPs), help cancer cells escape their original locations by cutting through proteins of the extracellular matrix, which normally holds cells in place.

The MIT nanoparticles are coated with peptides (short protein fragments) targeted by different MMPs. These particles congregate at tumor sites, where MMPs cleave hundreds of peptides, which accumulate in the kidneys and are excreted in the urine.

In the original version of the technology, these peptides were detected using an instrument called a mass spectrometer, which analyzes the molecular makeup of a sample. However, these instruments are not readily available in the developing world, so the researchers adapted the particles so they could be analyzed on paper, using an approach known as a lateral flow assay — the same technology used in pregnancy tests.

To create the test strips, the researchers first coated nitrocellulose paper with antibodies that can capture the peptides. Once the peptides are captured, they flow along the strip and are exposed to several invisible test lines made of other antibodies specific to different tags attached to the peptides. If one of these lines becomes visible, it means the target peptide is present in the sample. The technology can also easily be modified to detect multiple types of peptides released by different types or stages of disease.

“This is a clever and inspired technology to develop new exogenous compounds that can detect clinical conditions with aberrantly high protease concentrations,” says Samuel Sia, an associate professor of biological engineering at Columbia University who was not involved in the research. “Extending this technology to detection by strip tests is a big leap forward in bringing its use to outpatient clinics and decentralized health settings.”

In tests in mice, the researchers were able to accurately identify colon tumors, as well as blood clots. Bhatia says these tests represent the first step toward a diagnostic device that could someday be useful in human patients.

“This is a new idea — to create an excreted biomarker instead of relying on what the body gives you,” she says. “To prove this approach is really going to be a useful diagnostic, the next step is to test it in patient populations.”

To help make that happen, the research team recently won a grant from MIT’s Deshpande Center for Technological Innovation to develop a business plan for a startup that could work on commercializing the technology and performing clinical trials.

Bhatia says the technology would likely first be applied to high-risk populations, such as people who have had cancer previously, or had a family member with the disease. Eventually, she would like to see it used for early detection throughout developing nations.

Such technology might also prove useful in the United States, and other countries where more advanced diagnostics are available, as a simple and inexpensive alternative to imaging. “I think it would be great to bring it back to this setting, where point-of-care, image-free cancer detection, whether it’s in your home or in a pharmacy clinic, could really be transformative,” Bhatia says.

With the current version of the technology, patients would first receive an injection of the nanoparticles, then urinate onto the paper test strip. To make the process more convenient, the researchers are now working on a nanoparticle formulation that could be implanted under the skin for longer-term monitoring.

The team is also working to identify signatures of MMPs that could be exploited as biomarkers for other types of cancer, as well as for tumors that have metastasized.

The Boston Globe profiles Dr. Sangeeta Bhatia and the new low-cost urine test she developed to detect cancer, as well as her work applying engineering techniques to medicine.

Researchers at MIT have developed a new method to diagnosis cancer, writes Liat Clark in Wired. The new technique, which identifies proteins in urine associated with cancer, works like a pregnancy test and could be used to improve cancer care in developing nations, Clark reports.

WBUR reporter Carey Goldberg highlights a new technique developed by MIT researchers, “just out in the Proceedings of the National Academy of Sciences that describes success in diagnosing cancer with a simple, paper-based test — an advance that could be particularly important for the developing countries where 70 percent of cancer deaths now occur.”