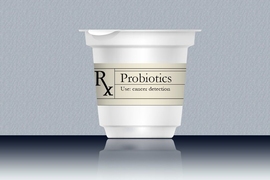 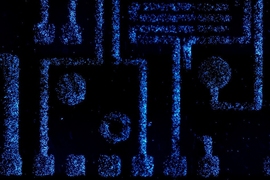 ↓ Download Image
Caption: This image shows a motherboard image micropatterned using programmable probiotic bacteria. The blue lines are composed of dots made of bacteria. This technique was developed in the Bhatia laboratory.
Credits: Image: Tal Danino and Vik Muniz

Caption:
This image shows a motherboard image micropatterned using programmable probiotic bacteria. The blue lines are composed of dots made of bacteria. This technique was developed in the Bhatia laboratory.
Credits:
Image: Tal Danino and Vik Muniz

Engineers at MIT and the University of California at San Diego (UCSD) have devised a new way to detect cancer that has spread to the liver, by enlisting help from probiotics — beneficial bacteria similar to those found in yogurt.

Many types of cancer, including colon and pancreatic, tend to metastasize to the liver. The earlier doctors can find these tumors, the more likely that they can successfully treat them.

“There are interventions, like local surgery or local ablation, that physicians can perform if the spread of disease in the liver is confined, and because the liver can regenerate, these interventions are tolerated. New data are showing that those patients may have a higher survival rate, so there’s a particular need for detecting early metastasis in the liver,” says Sangeeta Bhatia, the John and Dorothy Wilson Professor of Health Sciences and Electrical Engineering and Computer Science at MIT.

Using a harmless strain of E. coli that colonizes the liver, the researchers programmed the bacteria to produce a luminescent signal that can be detected with a simple urine test. Bhatia and Jeff Hasty, a professor of biology at UCSD, are the senior authors of a paper describing the new approach this week in the journal Science Translational Medicine. Lead authors are MIT postdoc Tal Danino and UCSD postdoc Arthur Prindle.

Previous studies had shown that bacteria can penetrate and grow in the tumor microenvironment, where there are lots of nutrients and the body’s immune system is compromised. Because of this, scientists have been trying for many years to develop bacteria as a possible vehicle for cancer treatment.

The MIT and UCSD researchers began exploring this idea a few years ago, but soon expanded their efforts to include the concept of creating a bacterial diagnostic.

To turn bacteria into diagnostic devices, the researchers engineered the cells to express the gene for a naturally occurring enzyme called lacZ that cleaves lactose into glucose and galactose. In this case, lacZ acts on a molecule injected into the mice, consisting of galactose linked to luciferin, a luminescent protein naturally produced by fireflies. Luciferin is cleaved from galactose and excreted in the urine, where it can easily be detected using a common laboratory test.

At first, the researchers were interested in developing these bacteria for injection into patients, but then decided to investigate the possibility of delivering the bacteria orally, just like the probiotic bacteria found in yogurt. To achieve that, they integrated their diagnostic circuits into a harmless strain of E. coli called Nissle 1917, which is marketed as a promoter of gastrointestinal health.

In tests with mice, the researchers found that orally delivered bacteria do not accumulate in tumors all over the body, but they do predictably zero in on liver tumors because the hepatic portal vein carries them from the digestive tract to the liver.

“We realized that if we gave a probiotic, we weren’t going to be able to get bacteria concentrations high enough to colonize the tumors all over the body, but we hypothesized that if we had tumors in the liver they would get the highest dose from an oral delivery,” says Bhatia, who is a member of MIT’s Koch Institute for Integrative Cancer Research and Institute for Medical Engineering and Science.

This allowed the team to develop a diagnostic specialized for liver tumors. In tests in mice with colon cancer that has spread to the liver, the probiotic bacteria colonized nearly 90 percent of the metastatic tumors.

In the mouse experiments, animals that were given the engineered bacteria did not exhibit any harmful side effects.

The researchers focused on the liver not only because it is a natural target for these bacteria, but also because the liver is hard to image with conventional imaging techniques like CT scanning or magnetic resonance imaging (MRI), making it difficult to diagnose metastatic tumors there.

With the new system, the researchers can detect liver tumors larger than about one cubic millimeter, offering more sensitivity than existing imaging methods. This kind of diagnostic could be most useful for monitoring patients after they have had a colon tumor removed because they are at risk for recurrence in the liver, Bhatia says.

Andrea Califano, a professor of biological sciences at Columbia University, says the study is “seminal and thought-provoking in terms of clearing a new path for investigating what can be done for early detection of cancer,” adding that the therapeutic possibilities are also intriguing.

“These bacteria could be engineered to cause genetic disruption of cancer cell function, deliver drugs, or reactivate the immune system,” says Califano, who was not involved in the research.

The MIT team is now pursuing the idea of using probiotic bacteria to treat cancer, as well as for diagnosing it.

The research was funded by the Ludwig Center for Molecular Oncology at MIT, a Prof. Amar G. Bose Research Grant, the National Institutes of Health through the San Diego Center for Systems Biology, and the Koch Institute Support Grant from the National Cancer Institute.

Scientific American reporter Cynthia Graber speaks with Prof. Sangeeta Bhatia about her new research that shows how bacteria could be used to detect cancer. “I think there's really a whole world of possibilities once you start thinking about using bacteria as a platform upon which to engineer functions,” says Bhatia.

MIT researchers have developed a test that can accurately detect cancer in urine, reports Megan Scudellari for The Boston Globe. “Bacteria can grow in tumors as small as 1 millimeter, so the urine test has the potential to detect liver tumors — which tend to be small and dispersed — very early on, which would improve survival rates for patients,” Scudellari explains.

Professor Sangeeta Bhatia and her colleagues have successfully engineered bacteria that can be used to detect cancer and diabetes, writes Robert Service for Science. The researchers found that “while conventional imaging techniques struggle to detect liver tumors smaller than 1 square centimeter, this approach was able to flag tumors as small as 1 square millimeter.”

Researchers from MIT and the University of California, San Diego have genetically modified bacteria so that it can detect cancer, BBC News reports. The researchers hope that one day, “the general approach could one day be used to develop relatively cheap and easy to use home-testing kits for a range of diseases.”

Los Angeles Times reporter Melissa Healy writes that researchers from MIT and the University of California, San Diego have successfully modified bacteria to detect cancer. “Their work is a key component of broader efforts to make the diagnosis and treatment of diseases such as cancer increasingly precise and targeted," writes Healy.

MIT researchers have developed a non-invasive way to detect liver cancer using probiotics, reports Vijee Venkatraman for BetaBoston. The researchers found that they could “use bacteria as tumor scouts…and engineer them to emit a signal once they reached the mass and multiply.”

Physicist is honored with the RSEF’s highest scientific honor for his work on twistronics.

With years of experience under its belt, MIT Medical works with the campus community to limit the spread of Covid-19.

MIT researchers find blocking the expressions of the genes XPA and MK2 enhances the tumor-shrinking effects of platinum-based chemotherapies in p53-mutated cancers.