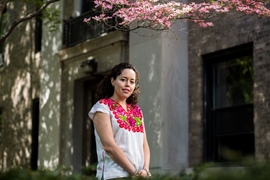 ↓ Download Image
Caption: When PhD student Tiziana Smith isn’t at her computer refining or running her models, she can be found organizing activities and initiatives to help her fellow graduate students find mentors and become leaders themselves.
Credits: Image: Jake Belcher

Caption:
When PhD student Tiziana Smith isn’t at her computer refining or running her models, she can be found organizing activities and initiatives to help her fellow graduate students find mentors and become leaders themselves.
Credits:
Image: Jake Belcher

Tiziana Smith has had her mind on water for years. The San Antonio native learned about the importance of preserving the city’s water resources in grade school — and has used that knowledge as a springboard into her research at MIT.

“I was always aware of the importance of water and the potential tension between urban uses and agriculture,” says Smith, a fifth-year graduate student in the Department of Civil and Environmental Engineering. “This idea of understanding how to allocate a limited resource and how to use it efficiently is really interesting to me — especially in the agricultural sector, which is the world’s the largest user of water.”

As an undergraduate at Harvard University, Smith studied environmental science and public policy, and researched wastewater reuse in urban areas. After graduating, she worked as a research assistant at the World Bank in Hanoi, Vietnam, where she was able to study firsthand how agriculture can affect ways of life. For Smith, resource availability and global agricultural research “have a lot to do with livelihoods and providing people with a safe environment to live in and trying to make our food system more equitable.”

While in Vietnam, Smith realized she wanted to gain a stronger technical background to prepare her to study the resource availability problems of the future. After working with the World Bank for two years, Smith returned to Cambridge, Massachusetts, as a graduate student in the MIT Technology and Policy Program.

Smith worked with Dennis McLaughlin, the H.M. King Bhumibol Professor of Water Resource Management, to study the implications of land and water restrictions on food production in China. After graduating with a dual master’s degree in environmental engineering and technology and policy, she decided to stay on for a PhD.

Smith’s doctoral research builds off her master’s research and aims to answer the question: How many people can China feed? “This question is interesting because China has the world’s largest population right now, and people are getting richer and richer,” Smith says. “So [the Chinese population] is demanding better diets with more meat and vegetables, which requires more resources.”

Smith says changes in those diets have coincided with changes in how China gets its food — moving from a self-sufficient agricultural economy to one in which more food is being imported — but the exact mechanisms for this change are unclear.

“What are the reasons they’re [importing more]?” Smith asks. “Is it because they really don’t have enough resources to grow the food themselves, or is it for economic or political reasons? We’re trying to understand if their food production system is limited by their resources or not.”

“Preliminary results indicate that food production could be increased in China by changing current cropping patterns and investing in irrigation infrastructure,” she adds.

Smith has developed a hydrological model that simulates the relationship between water availability and crop yields in China. “Understanding how much water the crops are taking up and evaporating is pretty crucial to understanding if [China is] water-limited or not,” she says. Smith is not the first to work on this modeling project, but she’s made key contributions, including upping the temporal resolution of the model and taking advantage of new global and regional data, including information from satellites.

To calibrate the computer model and perform simulations, Smith uses satellite data, climate data, and data from rain and stream gauges. Access to regular, reliable data is key to the model’s success. In April 2017, Smith traveled with 23 other MIT students to Washington, as part of the MIT Science Policy Initiative. There, she advocated for funding for NASA’s Earth-monitoring satellites, some of which provide the crucial data for her models.

While the models Smith develops in her research may help answer questions about the true agricultural capacity of China, she believes her research impact extends globally.

“[How much food can be grown] is an interesting question to ask in many other parts of the world, for example sub-Saharan Africa, where the population is expected to increase rapidly and the demand for food is expected to increase more quickly than in China,” Smith says. “Knowing if and where it would be best to grow crops is an interesting question. We’re hoping that the methodology that we are developing can be used anywhere.”

When Smith isn’t at her computer refining or running her models, she can be found organizing activities and initiatives to help her fellow graduate students find mentors and become leaders themselves.

“It’s been a great opportunity to meet people from across the campus and also have a space for reflection about what I want to do with my life,” Smith says. “It’s been really rewarding.”

In addition, Smith is a member of the Academy of Courageous Minority Engineers, a graduate student group that meets up weekly to discuss graduate life and the challenges faced by minority students. This year, Smith co-led a new initiative to invite faculty of color for lunch events with graduate students.

Smith has similarly organized a lunch series for women graduate students and faculty in civil and environmental engineering. One of her motivations for putting together these events is that none of her PhD classes at MIT have been taught by women professors. “I feel like there’s not a lot of chances to get mentorship, and I hope that this is a way that [women faculty] can become more and more accessible,” Smith says.

After Smith defends her dissertation, she hopes to find work in a field that uses both her technological and policy skillsets.

“I did the Technology and Policy Program because I like bridging between major stakeholders and scientists. Hopefully, I won’t be the person who’s doing the coding forever,” Smith says cheerily. “I want to find a position where I can do analyses and interact with stakeholders — and it’s tricky to find the place where you can do both.”

From fieldwork to the big screen

Food production in China could be increased with more irrigation