Food production in China could be increased with more irrigation 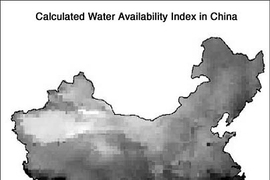 ↓ Download Image
Caption: Map shows the spatial variability in China of one key input to farming: water. Water is generally abundant in the south and scarce in the north and west.
Credits: Image courtesy / Piyatida Hoisungwan

Caption:
Map shows the spatial variability in China of one key input to farming: water. Water is generally abundant in the south and scarce in the north and west.
Credits:
Image courtesy / Piyatida Hoisungwan

An MIT team has systematically evaluated how water and land limitations affect the production of food in China. Initial findings suggest that China should be able to produce enough food to meet its growing population if it expands irrigation to permit more intensive farming, especially in the northern regions.

The analysis, led by Professor Dennis McLaughlin of the Department of Civil and Environmental Engineering, is a response to growing concern about feeding the world's expanding population.

"Many water-scarcity studies extrapolate recent trends in developing countries and say there is going to be a disaster," said McLaughlin, the H.M. King Bhumipol Professor. "My opinion is that these studies rely more on anecdotal evidence rather than a rigorous hydrologic analysis."

To fill that gap, he and recent graduates Amy Watson (S.M. 2004) and Marine Hermann (S.M. 2004), and graduate student Piyatida Hoisungwan have developed an approach that uses classical hydrologic methods and available data to determine how water scarcity affects a region's ability to produce food.

As a case study, they have been examining China, a country that depends almost entirely on domestically grown food. The study does not consider economic or political factors or food-distribution issues, but simply addresses the question of how many people China can feed with locally available land and water resources.

The researchers formulated a model that divides China into 2000 pixels. Each pixel is several hundred kilometers on a side and has its own distinctive rainfall, climate and land use. Six crop categories can be planted, with seasonal crop rotations allowed.

The team then performed two analyses--a "nominal" case and a "sustainable" case. The nominal case assumes current conditions: the total land available for crops is equal to the land now being cultivated, and irrigation occurs at today's level. It also allows people to pump groundwater wherever the extra water can be used. Based on those assumptions and available data, the model predicts that China can produce enough food to feed between 1.1 and 1.7 billion people.

The sustainable case also assumes current cropland area, but assumes that all of the land is irrigated, permitting farmers to grow crops more extensively and more frequently. To achieve sustainability, this case excludes groundwater pumping, which depletes underground reservoirs over time. Under those assumptions, the model concludes that China would be able to feed between 1.3 and 2.0 billion people.

The wide ranges of food production estimates produced by the model reflect uncertainty about China's current cropland area, which the team is working to clarify. Until such uncertainties can be reduced, the team is using a mid-range cropland estimate. With that estimate and the sustainable-case assumptions, they found that food production is enough to feed about 1.6 billion people--roughly the population of China predicted by the United Nations for 2030.

Thus, China should have enough water and land to feed its people for the foreseeable future if it builds the irrigation infrastructure assumed in the sustainable case.

"This is not an economic analysis. We're not saying that it's cost effective for China to feed all these people with domestic production," said McLaughlin. "It might be more cost effective for them to invest in new semiconductor plants and use the income to buy food from Canada." This study simply examines one option whereby China can feed its growing population.

This research was supported by the Alliance for Global Sustainability (AGS), an international partnership among four leading science and technology universities working with businesses, governments and NGOs. The Laboratory for Energy and the Environment coordinates the alliance's activities at MIT.